The summer of 2020 was set to be a banner year: The National Rural Electric Cooperative Association (NRECA) Youth Tour was about to break a record with electric cooperatives from 45 states sponsoring teens to attend the annual gathering in Washington, D.C. During what many call the “trip of a lifetime,” delegates visit America’s most historical monuments, tour museums, meet with elected officials, and learn about the impact electric cooperatives have both locally and globally. Maddie Cooley, sponsored by Scenic Rivers Energy Cooperative, and Lauren Thompson, St. Croix Electric Cooperative, were among the Wisconsin delegates excited to go. And then the world stopped.

The pandemic led to the cancellation of gatherings and travel across the country and the world. For the first time since it began more than 50 years ago, the Youth Tour was canceled in 2020 and then again in 2021. Beth Knudson, NRECA youth programs & training manager, had to constantly juggle the back-and-forth rules and regulations to pull off the 2022 trip right up until the last minute.

“D.C. regulations were a lot stricter than in rural America, and also they were not consistent,” Knudson explained. “So, you go somewhere in Delaware, and they may have no mask mandate, but then you would go somewhere in Arlington, Virginia, and they said well, you don’t have to wear masks, but you have to have your current vaccination card and be prepared to show it.” 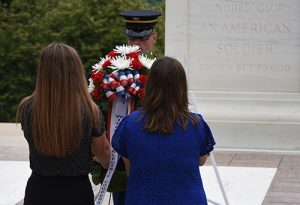 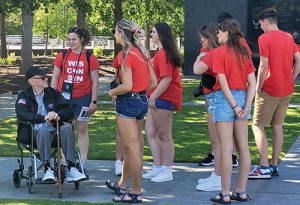 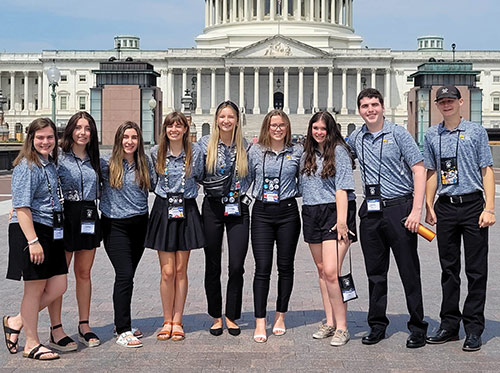 Despite the uncertainty related to the pandemic and its restrictions, 28 states sent 1,239 students on this year’s Youth Tour, which was staggered over two weeks in June. Cooley and Thompson, both now with one year of college behind them, were invited back and jumped at the chance.

“It was such an awesome experience and the highlight of my summer for sure,” said Cooley, who is studying health and human performance at UW-Platteville. “Standing there where Martin Luther King, Jr. gave his ‘I Have a Dream’ speech—it was a moment I will never forget.”

“It was an amazing and unique experience,” said Thompson, who grew up on her family’s farm and is studying animal science and industry leadership at Kansas State University. “We were able to have candid and difficult yet civil conversations with our representatives, which was such a great opportunity as we learn and grow and decide what our futures hold.” 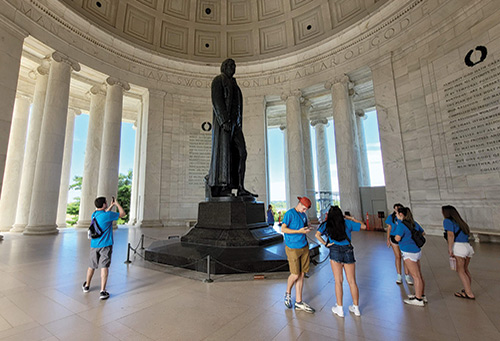 The tour made a stop at the Thomas Jefferson Memorial (above). Delegates
talk with Senator Ron Johnson (below). 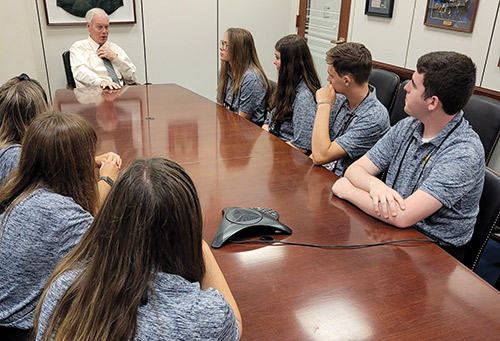 Thompson also said the trip helped further her understanding and appreciation of co-op values. “Co-ops give everyone a say. It’s like a family, and that is really cool,” she said.

The idea of the Youth Tour came from then-Senator Lyndon B. Johnson when he addressed the NRECA Annual Meeting in Chicago in 1957. The future president said, “If one thing comes out of this meeting, it will be sending youngsters to the national capital where they can actually see what the flag stands for and represents.”

The following year, a rural electric cooperative in Iowa sponsored the first group of 34 young people on a week-long study tour of our nation’s capital, and other states followed suit. In 1964, NRECA began coordinating joint activities among the state delegations, transforming the trip into the experience it is today. Wisconsin’s electric co-ops have been sending youth since 1990. To date, hundreds have traveled to D.C from the Badger State to participate in the Youth Tour and bring midwestern hospitality to the nation’s capital. 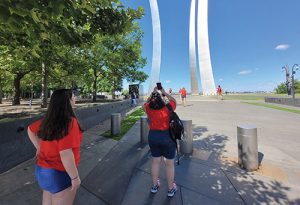 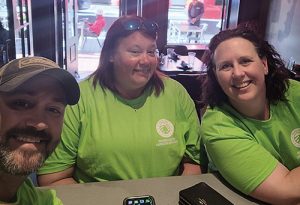 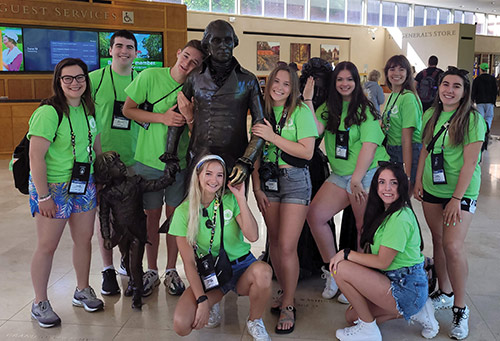 “Our delegates were kind and courteous and engaged,” Walden said. “One of the most somber moments was visiting the Pentagon Memorial. These students weren’t even born when 9/11 happened, and while they’ve learned about it in school, during this trip, they stood where it happened and read the names of those who lost their lives, and it really put it all in perspective for them. It was powerful and moving to see their reactions.”

“A few of our students spoke with a member of an Honor Flight while we were visiting the Air Force Memorial,” Clark said. “They were interested and respectful. Afterward, we were told how great our students were during a brief classroom session. They asked questions and were very polite throughout the class. Something we can all be very proud of.”

“I enjoyed talking with each representative from Wisconsin about what they were experiencing,” said Mims. “Some students clearly had a lot of knowledge and pushed my understanding by challenging my generational ideas with some of their own. In the end, I think that getting to have open, amicable, and productive conversations between those of us from different generations, political viewpoints, and backgrounds meant we all came away from Youth Tour having learned something. Having had these conversations at the very seat of power in our country was simply icing on the proverbial cake.” 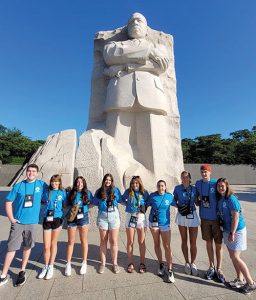 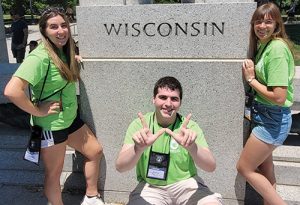 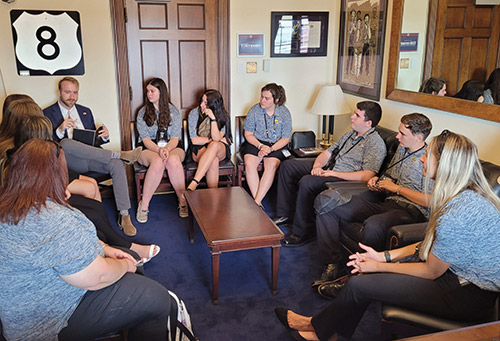 This tour has historically prompted cooperative kids to seek careers in leadership roles, from the energy industry to Congress. For example, the group met Sydney Scott working in the office of Senator Tammy Baldwin. Scott was a youth tour delegate from Wisconsin in 2014.

The experience with Youth Leadership Congress and the Youth Tour has helped Wisconsin electric cooperative students win the Glenn English National Cooperative Leadership Foundation’s top scholarship worth $10,000 twice within the past 10 years. Tessa Otto of Price Electric Cooperative, who reportedly had never been on a plane before Youth Tour, won the scholarship in 2017. William Tuchtenhagen of Pierce Pepin Cooperative Services took home the prize last year.

“Will Tuchtenhagen may have never been interested in broadband, solar charging stations, or anything like that had he not gone on Youth Tour and participated in youth programs thanks to his cooperative,” Knudsen said. “We have colleagues at NRECA that went through the program; we have people now working in the energy industry who went on the tour. So there is a very tangible connection between this opportunity and what they do every day in their jobs and how they’re helping rural America.” 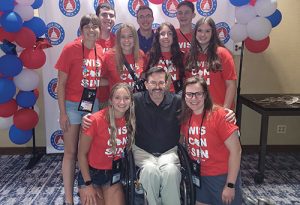 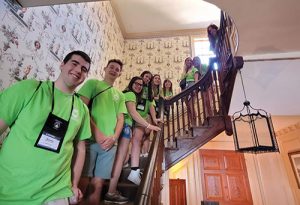 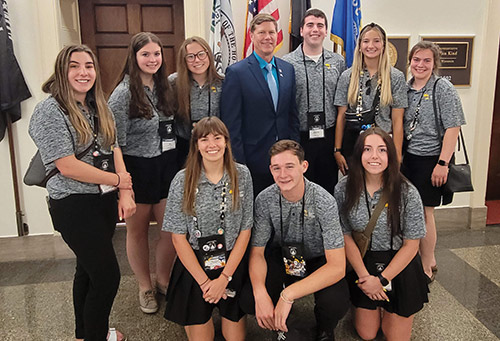 Cooley and Thompson say their Youth Tour experience strengthened their appreciation for and understanding of electric cooperatives, which will stay with them. Thompson hopes to return to Wisconsin and work in the agriculture industry, preferably in an electric co-op territory. “We love working with the co-op; we wouldn’t change it for anything,” she said.

Cooley is planning for a future in education and says Youth Tour helped strengthen her communication and leadership skills and helped her build a foundation and grow the skills she will need to serve her community. “Without my co-op, this would not have been possible. It’s just amazing what they do for us as future leaders—giving us these opportunities. It’s all because of the co-op’s investing in our success now and in the future,” she said.

Looking ahead, Knudson is now hoping 2023 is the year 45 states will participate in Youth Tour.

“This trip, honestly, it’s like no other opportunity in the country right now,” Knudson said. “No other organization does what the electric cooperatives do for rural youth, and that on its own speaks volumes about co-ops and our values.”—Julie Lund