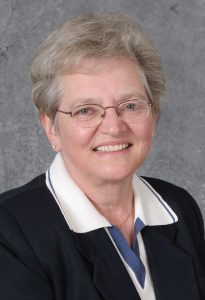 She is survived by Clyde Moon, her husband of 51 years, two adult children, four grandchildren, and numerous relatives and friends.

The nation’s only new nuclear power plant actively under construction took what could prove a major step forward at the end of July, as Georgia Power ordered the first nuclear fuel load for Plant Vogtle Unit 3. The company said it was the first fuel order placed in more than three decades for a newly designed U.S. reactor. The plant, one of two new units under construction at an existing nuclear site north of Augusta, is a joint project of investor-owned utility Georgia Power, Oglethorpe Power Cooperative, and Georgia-based municipal electric utilities. In a report made public in July, state regulators, who voted last year to allow the project to move ahead despite being behind schedule and over budget, indicated skepticism as to the developers’ ability to meet future deadlines. If deadlines aren’t met, the report said, the project cost, now pegged at $17.1 billion, could rise further, according to a story in The Augusta Chronicle. The developers have responded to lagging construction times by boosting the workforce, now numbering more than 8,000 on-site, according to Georgia Power. Vogtle Unit 3 is scheduled to become operational by the end of 2021.

The MISO is the wholesale power market overseer for a service area sprawling from the Gulf of Mexico to Manitoba. On the two January dates, the MISO South region experienced a near-all-time peak load, just 2 percent below the system’s highest peak ever, the report said.

Even after executing multiple protocols to cope with the high demand and missing capacity, load-shedding on the MISO system was avoided only through emergency power purchases of a combined 1,150 megawatts from the Southern Company, Georgia System Operations Corp., and the Tennessee Valley Authority, the report said.

It recommended stepped-up awareness of any lack of firm natural gas delivery and the operating limits of individual generating units as affected by extreme low temperatures.

Power plants floating on reservoirs and water treatment ponds could offer a way around high urban real estate costs and local opposition to electric infrastructure projects, according to an Energywire report this summer.

The generation facilities would be made up of solar panels floating on water bodies, the report said.

An earlier federal study suggested as much as one-tenth of U.S. electricity needs could be met by deployment of floating photovoltaic panels.