Clark Electric Cooperative General Manager and CEO Tim Stewart has worked in the industry for more than 36 years, and he has never experienced an emergency load reduction, or a “rolling blackout,” before. But that could all change this summer, and July is the month when Wisconsin is most at risk of needing more electricity than we will have.

“You have to be very concerned about the potential shortfall,” Stewart said.

In May, the North American Electric Reliability Corporation (NERC) released its 2022 Summer Reliability Assessment, which predicts which regions of the country will have the ability to generate enough power to match the potential need in the hot summer months. Only one region was classified as “high risk” of blackouts. It isn’t Texas or California, although they have an elevated risk. The Midcontinent Independent System Operator (MISO) region, which directs the power supply for 15 states including Wisconsin and parts of Canada, is the only high-risk region, which could mean forced outages, even here in the Badger State.

The warning comes even though, according to Dairyland Power Cooperative, it has adequate generating capability to meet its own load obligations for its member cooperatives, and data show that Wisconsin, Iowa, and Minnesota have capacity that exceeds required reserves, but Illinois, Missouri, Indiana, and Michigan do not. Regional transmission organizations, like MISO, are grid operators that pool all electricity produced in the region and dispatch power where needed, regardless of where it is produced. Overall, MISO expects summer demand could reach 124 gigawatts over the entirety of the region, but there will be only 119 gigawatts of available energy, which means all of the MISO region, including Wisconsin, could be subject to controlled blackouts.

According to the NERC report, in the MISO region, electricity demand is up 1.7% from one year ago, but generation capacity is down 2.3%, pushing MISO’s slim margin into the red. “More extreme temperatures, higher generation outages, or low wind conditions expose the MISO North and Central areas to higher risk of temporary operator-initiated load shedding to maintain system reliability,” the report reads.

Taylor Electric Cooperative General Manager and CEO Ken Ceaglske says the risk of blackouts here is very real. “We keep edging closer and closer to the limits of the system. The power grid is the type of system that is amazing and can do everything we expect of it, until it can’t. My greatest concern is that it will take a major event to realize that we are relying on resources that are not reliable, to maintain essential services.”

“As an attempt to decarbonize the energy industry, we’ve had a lot of coal generation retired. Coal is baseload power—it’s readily available—and that’s primarily been filled with wind and solar, which is intermittent power,” Stewart said.

Dunn Energy Cooperative General Manager and CEO Jesse Singerhouse agreed, and added, “As a country we’ve put too much emphasis on intermittent resources that can’t meet our demand. Combine that with challenges to transmission lines, and challenges to new natural gas and nuclear power plants, and also supply-chain issues, and we have the problem we do today.”

Transmission is critical to the grid, particularly with the expansion of wind and solar, since the technology that would allow renewable power to be stored long enough to stave off an extreme heat event does not exist yet. Therefore, it needs to be sent where it can be used, or it is lost. According to the NERC report, a key transmission line connecting MISO’s northern and southern areas is out of service due to storm damage last winter. The proposed Cardinal-Hickory Creek line, which will connect a substation near Madison to another in the wind-rich state of Iowa, continues to face legal challenges from environmental groups.

“On a typical day, if you look at the mix of fuels used to generate electricity in the MISO region, renewables do very well,” Stewart said, “But in an extreme weather event during critical conditions, we depend on coal, gas, and nuclear to keep the power on.” 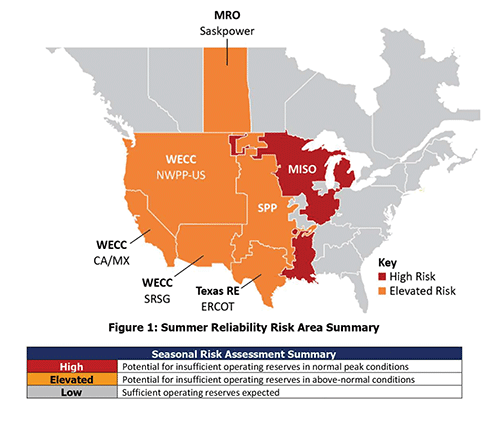 In what has become a divisive political debate, others blame gas and coal emissions for climate change, which they say is causing the extreme heat events and droughts that result in elevated demand and point to the blackout risk as more reason to retire coal and natural gas plants.

But electric co-op managers say you can be both pro-renewable and anti-blackout.

“I’m a big believer in an ‘all of the above’ approach to electricity generation,” Stewart said. “Renewables play a big part in how the future of electricity looks in this country. But we are not at the point where we can sacrifice baseload power for intermittency.”

“I think that we need to ease up on the high-speed transition from reliable baseload power plants to intermittent resources like wind and solar,” Ceaglske said. “And we need to consider modern nuclear units as a viable option to provide steady and reliable power.”

The reliability report highlights additional vulnerabilities to the grid. According to NERC, power inverters, which are electronic controls used to link wind and solar farms to the high-voltage grid, are supposed to be programmed to “ride through” short-term disturbances, but often they are not, which compounds the stress on the grid.

NERC’s report also cites an increased danger of potential Russian cyberattacks on the nation’s power systems as an added threat to reliability.

For today though, Stewart says his main message to members is, don’t panic. All utilities, including electric distribution cooperatives and Dairyland Power Cooperative, as well as MISO each have multi-step plans, ready for implementation, that are aimed at minimizing the impact a forced rolling blackout would have on members, should it ever happen. Electric cooperatives have been working for decades on plans they hoped to never have to use.

The plans include specific steps that precede a rolling blackout, include efforts to reduce load, or cut back on the amount of electricity being used, first voluntarily, then systematically, if necessary. The worst-case scenario is total grid failure, which would happen if the load reduction would be unsuccessful, and the demand remained for electricity that is not available. Similar to running your car out of oil, this creates a domino effect of technical malfunction that could take months to repair and would be extremely costly.

Stewart says each co-op has its own plan, but should Clark Electric Cooperative members face rolling blackouts, the disruption would be rotated. This means one group of members may face power outages for an hour, then they would come back on-line, and another group would go off, and so on, until the crisis is over.

“When you have a bad winter storm, some members can lose power for days,” Stewart said. “IF there is a rolling blackout, it is unlikely to be prolonged. We can get through this.”

The most important thing members can do this summer, he says, is to heed the warnings and do your part to reduce electricity use, especially on hot days.

“When you hear ‘peak alert’ or ‘summer shift,’ please take it seriously,” Stewart said. “Grill out instead of using your oven, do laundry at night or early morning, not in the heat of the afternoon, use your air conditioning sparingly, and please do not ‘overcool’ your house in anticipation of an outage.” 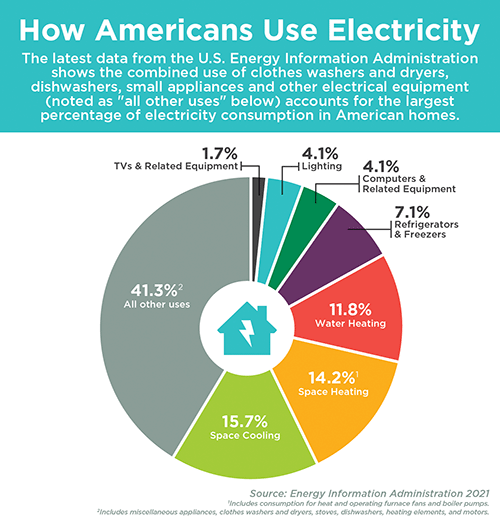 Ceaglske adds, “Use this opportunity to reinforce the simple lessons we teach our kids: Turn off the lights when you leave the room, turn off the TV if you are not watching it, don’t stand around with the fridge door open, etc. The cheapest power is the power we don’t need to generate, and that’s also what’s best for the grid.”

As we continue to transition to more clean energy while developing the technology needed for renewable storage, this “all-hands-on-deck” approach to managing the grid to help prevent blackouts may be the new normal that will continue long beyond the hot summer months.

Riverland Energy Cooperative General Manager Jerry Sorenson says they are working to educate members about the potential for blackouts, in what may be a Wisconsin wake-up call. “The concept of turning off power to the members goes against everything we stand for and the reason we exist. We have to work together to resolve this before something really bad happens.”—Julie Lund