What caused California’s blackouts and could it happen here?

It was hot, even by California standards. For several days in August, temperatures peaked into the 100s, tripping up the state that was running full stride in the race to lead the nation in green energy policy. Hundreds of thousands of residents were left to suffer through sweltering heat, without any power at all.

State leaders immediately called for an investigation into the cause of the rolling blackouts. California Governor Gavin Newsom criticized the California Independent System Operator (CAISO), saying “failure to predict these shortages is unacceptable.” He added, “These blackouts, which occurred without prior warning or enough time for preparation, are unacceptable and unbefitting of the nation’s largest and most innovative state.”

Except that they were warned. In December of 2019, the head of CAISO, the organization in charge of the state’s power grid, issued a written warning alerting the the state’s utilities commission of “significant reliability challenges.” According to CAISO, the addition of utility and rooftop solar would not be able to handle peak demand that had been met with natural gas plants, “which is not consistent with policy objectives to decarbonize the grid.” In simple terms, government-driven directives to meet renewable energy goals were putting reliability at risk.

The report pointed out the obvious—the sun doesn’t always shine (even in California) and the wind doesn’t always blow, especially when you need it most—at peak demand times later in the day. And that creates a problem if you increase dependency on solar and wind energy without a backup plan. California moved forward with plans to retire four more natural gas plants.

But the Golden State did have a backup plan. When necessary, they would get energy from plants in nearby states. “It’s the rough equivalent of saying, ‘I’m not going to purchase a car because I’m environmentally sensitive, I’m just going to borrow my friend’s car whenever I need one,’” Energy Secretary Dan Brouillette told Fox Business. “That’s fine until both of you need it at the same time and that’s what happened.”

What’s happening in California is a cautionary tale for all states looking to aggressively reduce dependency on natural gas and nuclear energy sources.

According to the California Energy Commission, the state currently gets about 32 percent of its electricity from wind and solar and is working aggressively to increase that to 60 percent by 2030, and 100 percent by 2045. According to the Wisconsin Public Service Commission, in Wisconsin, recently approved solar energy projects will increase renewable energy to at least 13 percent of generation by 2023.

Why green is good, but diverse is better

Coal, natural gas, and nuclear power plants all produce consistently, without relying on nature’s cooperation, but none are as “green” as wind and solar. Compared to coal, natural gas plants produce roughly half of the climate-concerning carbon dioxide, and emission-control projects are also beneficial. Nuclear power reactors don’t produce carbon dioxide while operating, but the process of mining and refining uranium ore and making reactor fuel require large amounts of energy.

In a perfect world for the most avid environmentalists, all electricity would come from solar and wind, because it produces virtually no carbon emissions (other than the fuel needed for construction, storage, and distribution). The energy crisis in California demonstrates why a diverse portfolio, and adequate transmission plan are critical for reliable energy supply.

It’s an approach embraced by Wisconsin electric co-ops, including generation & transmission co-op Dairyland Power Cooperative. In proposing the Nemadji Trail Energy Center, a combined-cycle natural gas plant that will be built in Superior, Rob Palmberg, vice president, external and member relations at Dairyland said, “The Nemadji Trail Energy Center will serve as the ‘power behind the power’ supporting renewable energy investments. It will be the reliable alternative during those times when the wind isn’t blowing and the sun isn’t shining. This flexible and highly efficient natural gas facility will provide on-demand generation to our growing system and support our expanding renewable energy resources.”

Similarly, Dairyland’s recently approved Cardinal-Hickory Creek transmission line, which will run from Iowa to Middleton, is “renewable enabling,” according to the cooperative. “Wisconsin’s move to add more wind energy relies on the ability to get it here from Iowa, where wind is abundant. This project is also key to allowing the state to increase renewable energy supply, without risking reliability,” Palmberg added. “Connecting renewable energy in Iowa and Wisconsin using the Cardinal-Hickory Creek transmission line will improve reliability and increase the capability to deliver low-cost wind and solar resources; relieve congestion, which will also help reduce energy costs; and provide other economic benefits to our cooperative members.” 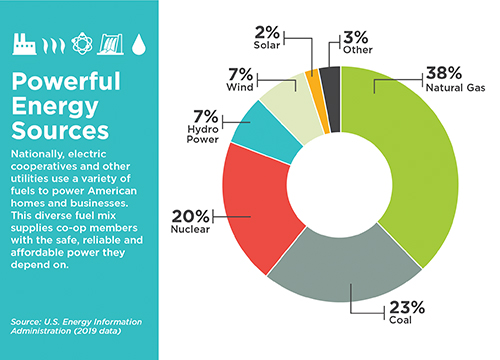 The need for diversification and planning is highlighted in a study released by the Midcontinent Independent System Operator (MISO), which manages the generation and flow of electricity in a 15-state region, including Wisconsin. The study concluded that electric grid complexity and reliability issues increase sharply as overall renewable energy penetration levels move from 30 to 40 percent, and increasing levels of renewable energy will require a lot more transmission capacity to move the intermittent energy throughout the region.

While California’s CAISO was warning of the risk of blackouts, Wisconsin regulators reviewed whether the state could provide or procure enough electric generation capacity, from all sources, to meet projected customer demand, and determined that the answer, currently, is yes. According to a recent report, “Wisconsin’s projected capacity meets or slightly exceeds the 8.9 percent reserve margin each year from 2021 to 2026.”

“Renewable resources have great promise added at the right pace,” Dairyland’s Palmberg said. “Safety and reliability can’t come out of the equation, and reliability will be more important than ever as essential services are increasingly electrified with green energy. We still need to pay attention to the physics of our power supply systems, as they were not conceived for extraordinary levels of these unique intermittent resources. Today’s systems are evolving with advances in technology, but a thoughtful and methodical approach will help ensure we maintain reliability throughout this transition.”—Julie Lund