Here are the basics on one of the most important forces in your everyday life.

We depend on electricity 24/7, but have you ever wondered how it’s made, or where it comes from?

To understand the basics of something so important to modern life, think about steam from a teakettle and those magnets stuck to your refrigerator door.

Magnetic metals in nature attract each other because parts of the atoms that make up those metals want to match up with others. Those restless atomic particles are called electrons—and that’s where we get the word “electricity.”

In the early 1800s, a scientist in England named Michael Faraday noticed that when he rotated a metal disk through the middle of a horseshoe-shaped magnet, he could get electrons to flow together in an electric current.
Engineers soon took over and made Faraday’s process really complicated. And really useful. Today, nearly all our electricity comes from turbines that spin a magnet inside a coil of wires.

One way to turn those turbines is by heating liquid into steam that forces the turbine to spin, using the same principle that makes a teakettle sing. When you boil water on your stove, that liquid expands more than 1,000 times as it vaporizes. If you’ve ever had your hand burned near boiling water, you’ve felt the power that steam produces.

The use of heat to spin a turbine generates more than 80 percent of our electricity using either coal, natural gas, or nuclear power.

Coal is dug from the ground, either near the surface, or from deep underground mines, then is shipped to power plants, often by train.

At the power plant site, the coal is stored in large piles on the ground until it is ready to be burned. The coal chunks are crushed into smaller pieces, or even a powder, that is burned in a furnace.

The heat from that combustion is used to turn liquid into steam in a furnace/boiler that spins the steam turbine/generator producing electricity.

Large transformers at the plant boost the voltage of the electricity (while lowering the current and minimizing line loss potential) for shipment across the country through tall transmission lines. As it gets closer to where it will be used, a substation of transformers reduces the voltage to a level that can be safely delivered to a smaller transformer on the utility pole or pad-mounted transformer in your yard, decreasing the voltage further for use in your home.

As simple as that process sounds, each step is extremely complicated in order to make it as efficient and safe as possible. The furnace burns the coal up to 3,000 degrees Fahrenheit, and the steam it produces gets hotter than 1,000 degrees. Coal contains harmful elements that get captured and removed through sophisticated pollution controls. That environmental equipment can cost as much as the power plant itself.

Coal plants produce about a third of the nation’s electricity.

Ancient plants and animals that died long ago turned into coal, oil, and natural gas—that’s why all three are called fossil fuels.

Like coal, natural gas comes from the ground, and it can burn in a way that can drive a steam turbine or a natural gas-fired combustion turbine. Unlike coal, you can’t hold it in your hand—it’s a colorless gas, like air, and has to be transported by pipeline. Natural gas can also be piped directly into homes where it can be burned in water heaters and stoves.

In a natural gas power plant, specially designed combustion turbines burn the gas to make them spin, generating the electricity. The way natural gas turbines work is similar to a jet engine, and in fact they are a large, complicated version of what you see hanging on airplane wings.

Natural gas electric generation has advantages over coal: The plants are simpler, cheaper to build, require less staff, and they can be shut down and powered up more quickly. Natural gas doesn’t contain as many pollutants as coal, so fewer environmental controls are needed. Natural gas burning also produces less greenhouse gas. In the past, natural gas was more expensive than coal—until the 1990s when fracking and other new drilling techniques flooded the market. Natural gas prices dropped dramatically and many utilities are using it to replace coal generation.

Natural gas plants now produce about a third of the nation’s electricity, about the same as coal.

A nuclear power plant works basically the same as a coal plant—making steam to spin a turbine and generator.

The difference is that instead of burning coal, heat from a nuclear reactor heats the liquid into steam.

The basic fuel for a nuclear power plant is uranium, which is mined from the ground. It must then be formulated into expensive and complex fuel components for utility use.

A little uranium can last a long time, making it a promising, incredibly cheap power source. And it produces none of the pollution or greenhouse gas that comes from burning coal or natural gas. But the concentrated radioactivity in the nuclear reactor is potentially so dangerous that complex, expensive safety measures need to be part of any nuclear plant. Highly technical control systems need to be in place to slow or shut down the level of heat produced, and the nuclear reactor needs to be inside a strong containment building to keep radioactivity out of the atmosphere in the event of a low-probability accident in the reactor core.

Another controversy still has not been solved—how to dispose of the spent nuclear fuel, which can stay radioactive for millions of years before the radioactivity is brought down to naturally occurring radioactivity in the environment. Most of the spent fuel is currently stored in pools of water and dry storage casks at the site of the nuclear plant.

Nuclear power generates about one-fifth of the nation’s electricity.

Coal and nuclear power plants are often referred to as “baseload,” meaning that we want electricity to be available all the time, and those plants are well suited to run all the time. Natural gas has long been considered a fuel for “peak load,” meaning it is used for times of especially high electricity use. But with the drop in natural gas prices, it has become base load for the nation’s electric grid.

Heat produced by coal, natural gas, and nuclear power generates about 80 percent of our electricity. The rest comes mainly from hydroelectricity, solar, and wind. 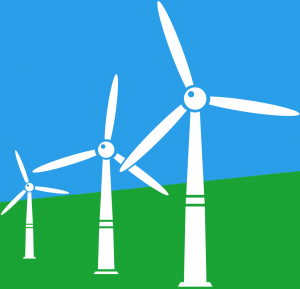 Readers may be surprised to see renewable generation virtually unmentioned in this article on how electricity is made, especially with some advocates calling for the United States to power itself with 100 percent renewables by mid-century.

That 100 percent goal is hotly contested, in large part because of two considerations: intermittency and energy density.

“Intermittency” is an industry term for what happens to wind and solar when the wind stops blowing, clouds appear, or night falls. It’s why wind and solar don’t displace coal, natural gas, and nuclear so much as exist alongside them, benefiting from their continuous availability. The future may see intermittency addressed with greatly advanced battery technology. Those improvements will bring their own tradeoffs of expense and reliance on toxic materials.

A more formidable challenge is “energy density,” industry shorthand for the differing ability of each individual generation source to yield a given amount of energy.

The Strata paper assigns hydropower the biggest land-use appetite among renewables, at 315 acres per megawatt of production.

Another paper, Energy and Land Use¸ was released last September by the United Nations and the International Renewable Energy Agency. While the two papers vary in their analyses and comparisons, both confirm land-use challenges unique to each energy source.

Energy and Land Use attributes the smallest footprint to nuclear power, requiring one-tenth the geographic space for the same electricity output from natural gas. Electricity generated from coal needs six times as much land as nuclear, assuming the coal is obtained by underground mining; switch to surface mining and coal’s footprint reaches 82 times that of nuclear, Energy and Land Use says.

The paper doesn’t endorse nuclear, which simply serves as a convenient baseline. The everlasting question is which environmental costs we accept. There will always be some.

These aren’t arguments against renewables. They’re a recognition that like every other energy source, renewables aren’t magic. Each energy source brings tradeoffs between benefits and costs.

Energy and Land Use suggests that “To what extent the overall land use of [renewable energy]is more favorable than that of non-renewable sources depends on the mix of renewables, their siting, method of deployment and maintenance/management.”—Dave Hoopman