…or, what would June be without the dairy industry?

Year after year, even a fleeting glance at this month’s edition of Wisconsin Energy Cooperative News confirms that June is Dairy Month, and it isn’t hard to figure out why. Through several decades of rural electrification in Wisconsin, a huge percentage of co-op members—and readers of the publication—were dairy farmers. That’s changed dramatically with a diversifying rural economy and more rural residents commuting to jobs in the cities. But there’s a reason why Wisconsin is known as the dairy state—as the song says, “nobody does it better”—and we’ll still be doing it for the foreseeable future.

But a few weeks ago I was at least half serious when I asked, “If the Green New Deal actually manages to do away with animal agriculture, where will the school kids get their milk?”

The “Frequently-Asked Questions” fact sheet that accompanied the Green New Deal’s rollout in February left no doubt about the intention to banish animal agriculture, along with other things we’ve grown accustomed to:
“We set a goal to get to net-zero, rather than zero [greenhouse]emissions in 10 years because we aren’t sure that we’ll be able to fully get rid of f–ting cows and airplanes that fast,” the fact-sheet said. 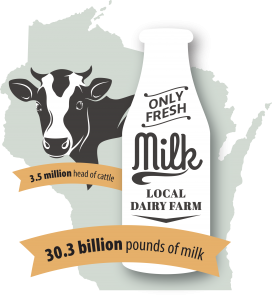 In this state,
that would involve
3.5 million
head of cattle, and the
30.3 billion
pounds of milk produced in 2017,
according to Wisconsin 2018 Agriculture Statistics.

Later on it pledges a “national mobilization” to work with farmers and ranchers to create a “greenhouse gas-free food system.” Whatever else that might mean, it means livestock agriculture would either go away or become stupendously more expensive in a state that’s now home to three and a half million head of cattle and counts on the revenue from 30.3 billion pounds of milk produced in 2017, according to Wisconsin 2018 Agriculture Statistics.

Are concerns about banning animal agriculture absurd? Yes, theoretically. But the Green New Deal was introduced in Congress. It is real legislation with the full force of law if passed, and thankfully, its proponents spelled out their intentions. It will go nowhere, but it opens the door for serious consideration of slightly less absurd food-targeting. For example, in April, New York City adopted its own version of the Green New Deal and it prohibits food services at city-run facilities from serving hot dogs.

So start thinking about what June might be called in the not-too-distant future. Thanks to Dotdash Publishing, we know it’s already Great Outdoors Month, Effective Communications Month, and Turkey Lovers Month. It’s also national Steakhouse Month, but of course that will have to go.