The original plan was a single memorial to honor Vietnam veterans but soon morphed into a veterans’ memorial park that rivals the monuments of Washington, D.C., and spans U.S. military conflicts throughout history.

What started out as farm fields surrounded by picturesque hills south of Arcadia began, through the 1990s, and through present-day, to transform into the centerpiece of this rural, western Wisconsin community. The 54-acre park has baseball fields, an aquatic center, an extensive “Kid’s Kingdom” playground, a 2000-seat amphitheater, pavilion, and more. But the main attraction of the memorial park is Soldiers Walk. 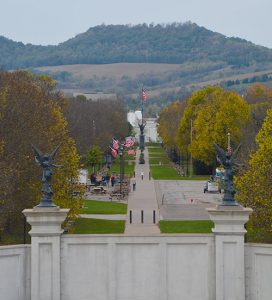 The walk was the vision of Ashley Furniture Industries founder Ron Wanek. Wanek was the principal benefactor and designer of the park’s monuments. He formulated the original plan—a memorial to Vietnam vets—because he respected and admired soldiers returning from Vietnam. Yet, Wanek also disliked how they were treated.

Soldiers Walk is an actual chronological timeline, starting at around the time when the Arcadia area was settled and progressing throughout American history. Each meter-long concrete section of the walk signifies one year. Additionally, all the flowerbeds in the middle of the walk represent years that our country was at war.

At one end of the walk, a rotunda with the American flag at the center represents American history predating the area’s settlement. A monument depicting President George Washington on horseback memorializes the Revolutionary War and anchors the walk. 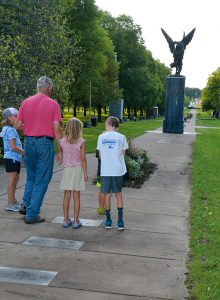 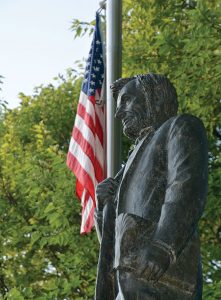 (Left) Soldiers Walk is a chronological walk through history, starting at the time
the Arcadia area was settled. Each meter of sidewalk signifies one year.
Monuments to all U.S. military conflicts are spaced at the corresponding years
through history.
(Right) A monument to President Abraham Lincoln represents the Civil War.

Continuing along the walk, there are more than 20 memorials to see, including those dedicated to the War of 1812, the Spanish-American War, Civil War, World Wars I and II, the Korean Conflict, and so on. Finally, the walk ends at the amphitheater, surrounded by General’s Overlook and stunning park views. A large piece of twisted steel from the 9/11 attack on the World Trade Center is also located among the memorials. 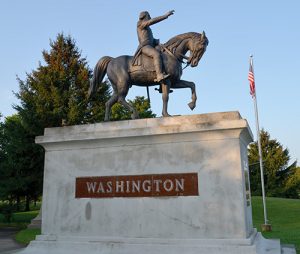 George Washington on horseback greets visitors at the far end of Soldiers Walk in Memorial Park.

Several of the monuments are fashioned in the likeness of Arcadia-area veterans. For example, the memorial for Iwo Jima (pictured on the cover of this magazine) is 32 feet high. It is modeled after the famous image of soldiers erecting the American flag on Mt. Suribachi. However, this statue features the faces of two local veterans—Russell Severson and Gerald Ziehme—who both fought at Iwo Jima.

Dave Oelkers, former Riverland Energy Cooperative general manager and a veteran himself, led tour groups through the park in its earlier years.

Oelkers worked with Olin Fimreite and the Trempealeau County Tourism Council to bring busloads of visitors from the Twin Cities area to the park. 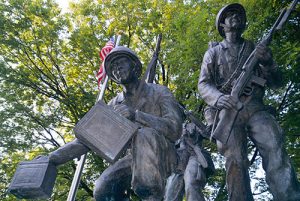 “I’ve seen a lot of veterans who will walk in the park, and they are awestruck when they walk down Soldier’s Walk and see what the community, with Ron’s [Wanek] encouragement and aggressiveness, did to make sure that it happened,” said Oelkers. “In order to do it justice, you need two or three hours to walk through there and read through the information. I think that is the part that veterans are most impressed with: how much information there is there. It means a lot to veterans to see it, especially World War II veterans. They are moved when they see it.”

Oelkers served for 21 years, from 1970-1991, in the National Guard Army Reserve. None of the six or so units Oelkers served with during his military career were deployed or activated. Formerly active with the American Legion Post in Arcadia, Oelkers is now the commander of post 77 in Chippewa Falls.

Of his American Legion involvement, Oelkers said, “I have a lot of friends who served in Vietnam and in the War on Terror. Part of it is the fact that I served 21 years, but I was never deployed. This is my way of honoring those folks who did serve overseas.” 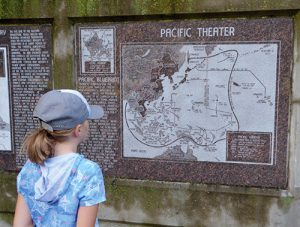 Oelkers moved to Arcadia in 1988 when he was hired on as the assistant manager of what was then Trempealeau Electric Cooperative (now Riverland Energy Cooperative). He was introduced to the area just as the park began taking shape.

“Folks really were impressed way back even then,” he said. “Now it’s even more impressive because now you’ve got a really nice setting, the trees have grown much taller, and it’s really an impressive walk.”

Riverland Energy member and Desert Storm Veteran Ken Myers and his wife, Dottie, live just a valley over from the park. Ken served in the Army and Army Reserve from 1969-97 as a civil affairs specialist. He worked with civilians and refugees in war zones. “We could go in and help a country get back on its feet,” said Ken of his duties.

Ken’s sons, Ben and Jesse, followed in his military footsteps. Jesse served in the Army Reserve in a medical unit out of Madison and Ben was in the Army for six years. He served as a helicopter crew chief on the 15S OH-58D Kiowa Warrior Helicopter. He was deployed twice and served both one-year tours in Iraq. 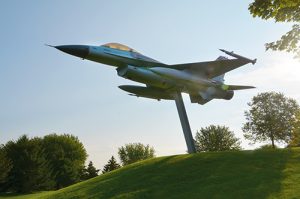 The first F-16 decommissioned from the Air Force is mounted near the General’s Overlook. Local veteran Ralph Haines is depicted in the pilot’s seat.

When asked why he entered the service, Ben answered, “family history mostly.” In addition to his father and older brother, Ben’s maternal grandparents were both in the armed forces during World War II.

“We both have friends and family members come from bigger cities like Milwaukee and the Twin Cities, we hear it all the time—it’s amazing what we have here,” the couple said. “They don’t have anything like it. It is remarkable.”

“It’s a wonderful honor for our military to have that kind of park in this area. I just wish more people could see it and were aware of it,” said Ken. 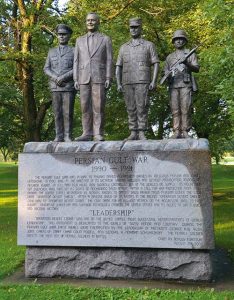 “It’s so important to remember all those eras of wartime,” said Dottie. “It’s nice that they list and engrave all the names of local folks who have served. It’s a point of pride for families and veterans to see their names there.”

Newer monuments sit at the far south end of the park, honoring more than just military heroes. A few monuments are dedicated to the early settlers of the Arcadia area and to the area’s agricultural history.

A bench dedicated in 1997 sits near the amphitheater. The inscription reads: “In recognition of cooperative pioneers who brought rural electrification to Trempealeau and La Crosse Counties, given by the members of Trempealeau Electric Cooperative on the occasion of our 60th anniversary.” But it’s the recognition to veterans that really shines.

General’s Overlook watches over the entire walk from behind the amphitheater.

“I’ve been to Washington, D.C, enough times that I’ve lost count. Any veterans memorial is important and impressive, but I don’t think any of them come as close to what you will see in Washington, D.C., as the one in Arcadia,” said Oelkers. —Dana Kelroy

Soldiers Walk Memorial Park is located at 551 Memorial Park Drive, Arcadia, and is open to the public daily, free of charge. To view in chronological order, start at the visitor’s center at 411 Gaveny Road. More information can be found at soldierswalkmemorialpark.com.