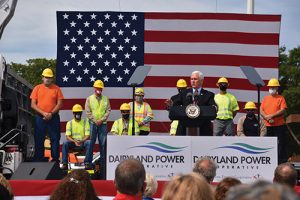 U.S. Vice President Mike Pence spent Labor Day at Dairyland Power Cooperative to recognize essential workers and thank those whose job it is to “keep the lights on.” Pence was joined by Labor Secretary Eugene Scalia and Wisconsin Senator Ron Johnson (R-Wisconsin). He was introduced by Dairyland President and CEO Brent Ridge.

Speaking to a crowd of several hundred people outside the Dairyland office in La Crosse, Pence thanked essential workers, particularly those who have gone above and beyond to help communities in response to the pandemic. 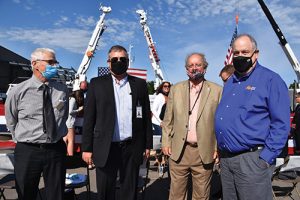 “I can’t think of a better place to be on an American holiday where we celebrate America’s tradition of hard work and the American dream,” VP Pence said.

Pence’s visit was the first of its kind to a Wisconsin electric cooperative in almost 70 years. According to WECA archives, it was August 15, 1951, when Alben Barkley, President Harry S Truman’s vice president, came to Madison for the dedication of the statewide headquarters building on South Park Street. He is pictured below, during his speech to electric co-op observers. 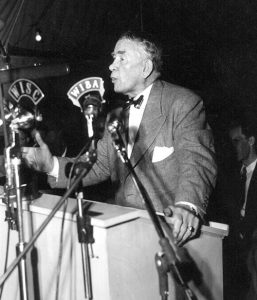 Also, former Vice President Henry Wallace visited the WECA office in Madison in 1945 to help push William Sanderson, then president of the newly incorporated Wisconsin Association of Cooperatives, as REA administrator. Wallace was commerce secretary at the time of the visit.

Editor’s note: Dairyland Power Cooperative accepted a White House request for an official visit on Labor Day. Dairyland is nonpartisan and values working with elected officials of all parties. The cooperative does not endorse political candidates.