“I noticed the tractor stop. Then it started rolling backward down the hill and came to a rest with its trailer jackknifed. As this was happening, I could see the farmer’s head roll back and forth, then slump to the side. I immediately knew something bad was happening,” said VEC lineworker Matt Hirschfield in describing the scene on September 20, 2021, at about 11 a.m. Matt and another VEC lineworker, Mike Berger, were located a few miles south of Leon, on County Highway J, repairing an underground junction box that had been damaged the previous day.

Just before going unconscious, Joe Schaitel remembers not feeling right and trying to idle the tractor down. “I tried to push the floor pedals with my feet to stop the tractor, but my legs wouldn’t move,” Joe said. The last thing Joe remembers was Matt next to him in the tractor cab asking him if he was alright. 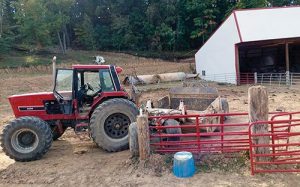 This is where Joe’s tractor ended up after he went unconscious at the wheel.

As soon as Matt realized Joe was unresponsive, he immediately dialed 911 and got through to Monroe County dispatcher Shelly Muller, who began dispatching emergency vehicles to the location. Matt then used his truck radio to declare a Mayday situation to all Vernon Electric Co-op (VEC) personnel and to call over Mike Berger, who was working nearby and had an automated external defibrillator (AED) on his truck. Working together they pulled Joe’s limp body out of the tractor cab and onto the ground where they began cardiopulmonary resuscitation (CPR).

Matt had visited Joe’s house that morning, prior to the incident, and spoke with Joe’s wife, Alice, to tell her their power would be off-line for a bit while they did their repair work. Even though Alice usually could see Joe in his tractor from the house most of the time, the tractor ended up in a spot out of her view. “I heard the sirens and saw the emergency vehicles coming our way. I immediately thought one of the lineworkers was injured. But then when I saw where the emergency vehicles stopped and saw the shoes of the person lying on the ground, I thought, ‘Oh no, it’s my husband!’ ” 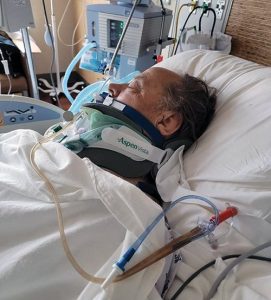 Initially, it didn’t look good for Joe’s survival, but quick action, the right equipment, and the right training provided for a happy ending.

Sparta Fire Chief Mike Arnold was on the scene in about 8 minutes and said Matt and Mike had already used the AED on Joe at least three times. Shelly, the dispatcher, was on Matt’s cell phone the whole time helping with the situation and giving instructions through the phone’s hands-free speaker. Mike Arnold, who has been working in the emergency services field for over 50 years, observed Joe, who also happened to be a good friend. “Joe didn’t look good. I started praying. I didn’t think he was going to make it. I was amazed when the ambulance paramedics told me later that Joe had a good heartbeat just before speeding him off to the hospital. Initially I requested the MedLink, but it was inclement weather that day and the helicopter was grounded, so ambulance transport had to do.”

Joe was stabilized at the hospital and by about 6:30 p.m. that same day he was awake and doing well enough to be taken off ventilation. Joe’s daughter, Pam Brady, who happens to be a hospital caregiver, was surprised at how quickly Joe began recovering. The paramedics, doctors, and Mike Arnold are sure Joe would have died without the first aid provided by Matt Hirschfield and Mike Berger. 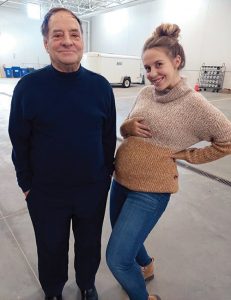 Joe and his granddaughter, Leah, who, by the time you read this will have had his great-grandchild.

Joe’s granddaughter, Leah Brady, says her grandfather has nine lives. Joe is a Vietnam veteran and received the Purple Heart medal after a landmine exploded near him, wounding himself and killing two soldiers, and friends, next to him. Heart problems run in his family, and Joe’s lost five of his nine siblings to heart problems. One of his brothers passed away from cardiac arrest just three weeks after this incident.

In November Joe and his family stopped by Vernon Electric’s office to reunite with his rescuers. And he had some words to share with everyone. “Thank you to Matt Hirschfield and Mike Berger for their quick actions and saving my life. Thank you to Vernon Electric for providing the training to its employees that helped them to immediately know what to do to save my life. Thank you for having an AED in their truck. And thank you to Vernon Electric’s board of directors for their decision to put an AED in every co-op vehicle. Everyone should know how to do CPR and AED’s save lives. Take care of your heart and eat healthy, like I’m starting to do now.” 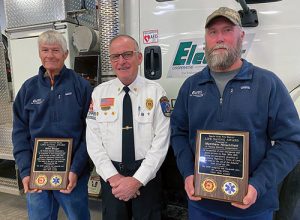 Mike Arnold shared Joe’s sentiments with Vernon Electric’s employees and presented plaques from the Sparta Area Fire District to Matt Hirschfield and Mike Berger. The awards recognize Matt and Mike for their “courageous and quick actions during an emergency situation. You came to the aid of Joe Schaitel and saved his life.”

Joe and his wife, Alice, live about five miles south of Sparta, in the Town of Leon, near Hwy. 27. He has served his community over the years in many ways, including 16 years on the Monroe County Board of Supervisors. Ironically, he was also instrumental in bringing 911 capabilities to Monroe County as the chairman of the Law Enforcement Committee many years ago. We’re glad Joe is on the mend and doing well.