Soon after last November’s elections the Wisconsin Electric Cooperative Association, along with Dairyland Power Cooperative and local electric cooperatives, organized a series of informal meetings with the men and women chosen by voters to represent us in Madison. We also met with Wisconsin’s only new member of Congress, Bryan Steil, who succeeds Paul Ryan in Southeastern Wisconsin’s 1st congressional district.

Our goal in these meetings is not to lobby on a legislative agenda, but to introduce and in some cases reintroduce the freshly elected lawmakers to their local electric co-ops and the people who work for them and those who lobby on their behalf in Madison and Washington, D.C. Experience shows that such meetings, held early in a legislator’s career, present an opportunity for us to get to know each other when no one is asking for anything.

That kind of setting helps build trust. And at the same time, helping lawmakers understand how our co-ops serve the energy needs of their constituents helps them later on, when the time comes for making informed decisions.
Our goal in representing your cooperatives is to help keep your electric rates affordable and your service reliable. Building a lawmaker’s understanding of the unique character of the areas and members our co-ops serve is an essential part of carrying out that mission.

For example, when legislative bodies consider policy choices that would increase the cost of using energy for Wisconsin farmers, businesses, and rural families, it’s important that they know household income in areas served by electric co-ops is 12 percent below the national average. 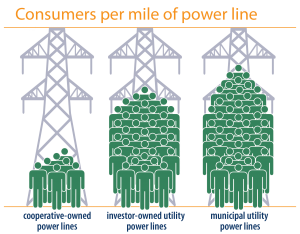 This challenge is further complicated for co-op members because cooperatives—necessarily—own 43 percent of the nation’s power lines but serve only about 11 percent of the population. On average, cooperatives serve seven members per mile of line, compared with investor-owned utilities which have 35 customers per mile of line and municipal utilities with 47 per mile of line. This adds up to significantly higher costs to serve sprawling co-op territories, far fewer consumers to share those costs, and far less revenue to cover the expense of building and maintaining the necessary infrastructure. It’s incumbent on us to help lawmakers understand these realities.

Meetings for the purpose of getting to know one another will continue through this month. March and April will find your association lobbying actively when issues warrant, in both Madison and Washington, D.C. But the early priority has been to make sure the door is open for grassroots networking with the men and women who represent you in state and national government. I encourage you to do the same with your elected officials.