A paradox of modern governance: As the economics of low-cost natural gas and federal regulation diminish coal use in electricity production, agencies like the Department of Energy (DOE) and Environmental Protection Agency (EPA) tout carbon capture and sequestration as a lifeline for the coal industry and coal’s future as power plant fuel.

Government has blown hot and cold on carbon capture and sequestration (CCS, the collection and underground disposal of carbon dioxide emissions). One major project, “FutureGen,” was launched in 2003 by the Bush administration, cancelled in 2008 because of cost, revived by the Obama administration with funds from the 2009 stimulus bill, and suspended in 2015 after more than $200 million in expenditures, when it didn’t meet private financing goals.

This, and similar difficulty with other projects, has been particularly problematic for the EPA, seeking to require CCS in future fossil-fueled power plants but barred by the Clean Air Act from mandating any technology that isn’t “adequately demonstrated” and economically feasible for commercial use.

The statutory phrase “adequately demonstrated” spelled trouble for the EPA as lawsuits were sure to greet its “new source performance standard” for power plants yet to be built, so in 2013 the agency announced its new-plant standard wouldn’t mandate CCS.

The concession was double-edged: Forgoing a direct mandate might sidestep the legal pitfall of conditioning regulatory compliance on emission controls nowhere deployed on a commercial utility scale, but mandated or not, coal-fired and many gas-fired plants wouldn’t meet the contemplated emission limits without the expensive and still-struggling technology. On April 17, a three-judge panel of the U.S. Court of Appeals for the District of Columbia Circuit will hear arguments over the EPA’s authority to effectively rule out specific generation choices.

But last fall, issues raised both by objective researchers and by activist foes of a different energy-related activity reignited questions about carbon capture’s prospects. An academic study published in September suggests more concrete reasons than the risk of an adverse court ruling to re-examine geologic storage of highly compressed carbon dioxide as a centerpiece of climate regulation.

Last September 22, the journal Science published a Stanford University paper stating unequivocally that five Texas earthquakes in 2012 and 2013 were caused by underground injection of wastewater from oil and gas drilling. The strongest reached a magnitude of 4.8, minimally damaging but readily noticeable. 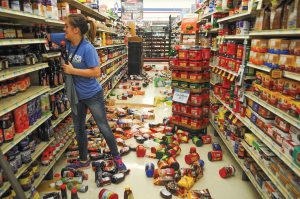 Only one minor injury was reported but dozens of buildings were damaged and shelves were partially emptied at this Pawnee, Oklahoma, grocery store when a 5.6-magnitude quake struck last September 3. (AP)

Also last September, the largest quake in Oklahoma history (magnitude 5.6 with numerous buildings damaged) sparked an uproar over underground disposal of drilling wastewater. Opponents of oil and natural gas production by hydraulic fracturing were optimistic they’d found its Achilles’ heel. Whether they’ve found the Achilles’ heel of fracking, or of CCS development on which billions have been spent, or of both, remains to be seen.

Coverage of the Stanford paper and the Texas and Oklahoma quakes focused on implications for fracking. As far as Wisconsin Energy Cooperative News has been able to discover, no other media outlet has connected the situations, but the controversy over wastewater disposal begs questions about practical deployment of CCS.

Specifically, complaints against fracking—more accurately, against techniques sometimes used to dispose of fracking wastewater but integral to CCS—invite questions whether the EPA ever seriously expected CO2 emissions to be converted under high pressure into a supercritical fluid and injected deep underground for permanent geological confinement.

Last October, we asked the EPA and DOE whether they “foresee any adverse implications for CCS” resulting from the Stanford findings.

Tricia Lynn of the EPA’s Office of Public Affairs provided a description of an agency technical report on “injection-induced seismicity” and added that “Seismic events due to underground injection are rare, occurring in less than 1 percent of disposal wells.”

DOE spokesman Gayland Barksdale responded that “To date, monitoring data from large-scale storage projects in the U.S. have shown no threat of CO2 leakage or induced seismicity.”

One reason for the absence of a threat may be the scarcity of large-scale sites where permanent geologic storage of compressed CO2 is happening.

After years of postponements, Mississippi Power’s Kemper County project—frequently claimed by the EPA as evidence of adequate CCS demonstration—missed its latest scheduled start-up date December 31. Kemper was announced in 2006 with a $1.8 billion cost estimate, since ballooned to $7 billion. In December, a Mississippi cooperative boosted its credit rating by offloading a 15 percent ownership share.

The CO2 Kemper proposes to capture is to be used for enhanced oil recovery (EOR), a process developed in the early 1970s to coax additional production from depleted wells by pumping in compressed CO2 to lighten the crude for easier extraction. Part of the CO2 is recovered for further EOR; part remains trapped underground.

Kemper and ADM were two of three “large scale” projects in the U.S. named in a 2016 report from the Australia-based Global CCS Institute as being “very close to commencing operations.” The third, NRG Corp.’s Petra Nova coal-fired power plant in Texas, began delivering captured CO2 for enhanced oil recovery in mid-January.

Stanford’s researchers aren’t the first to implicate injection wells in seismic disturbances, though their Science article is the first to explicitly call them the direct cause. The Youngstown, Ohio, area experienced 11 minor earthquakes during 2011, and state officials halted operations at a suspect well. The strongest quake, magnitude 4.0, came a week later.

At that time, Wisconsin Energy Cooperative News asked about forcing fluids into the ground under high pressure and was told by University of Wisconsin Extension Geologist David Hart that much research is needed.

“You need to understand the geochemistry and the stresses, the fracturing and faulting,” Hart said. “You need to do some background before you start pushing things underground or you’re going to end up with a situation where people are upset.”

In the years since, the glacial pace of CCS development, its formidable costs, and now fresh setbacks to the perception that it can be practiced safely, prompt questions whether CCS has ever been a practical solution or just a trip down a regulatory dead end, questions whether requiring CCS aims at “enabling” (the EPA’s word) continued fossil generation or deterring it.

That the EPA may have long understood this is intimated by its own statements spanning years. In a September 20, 2013, Regulatory Impact Analysis, the agency acknowledged its new power plant regulations “will result in negligible CO2 emission changes,” attributing the anticipated trivial impact to the expectation that “few, if any, solid fossil fuel-fired electric generating units will be built in the foreseeable future.”

The same week, then-EPA Administrator Gina McCarthy told reporters the CO2 rule for existing power plants, since finalized as part of the “Clean Power Plan,” wouldn’t mandate CCS. That, combined with its prediction that new plants needing CCS won’t be built, muddles the picture of what the EPA hoped to achieve with the technology.

Even as it admitted that plants requiring CCS were unlikely to be built, the EPA claimed regulatory prodding would drive advancement of the technology. But in March 2014, a corporate officer with a business interest in selling CCS equipment told a congressional panel the technology was economically unready for deployment and warned that mandating its use would achieve the opposite of the desired effect.

In March 12, 2014, testimony before the House Subcommittees on Energy and on Environment, Alstom Vice President Robert Hilton said a mandate “will essentially stop the development of CCS” by making new coal plants economic losers. “Without new coal plants, it is unlikely technology developers will continue to invest in CCS development,” Hilton said. “With no market in sight, investment will stop.”

The key finding of last fall’s Stanford research may lie less in “definitive proof” of long-held suspicions than in potential safety implications for disposal in the manner the EPA says is necessary to ensure captured CO2 stays underground.

In a statement released last September 22, Stanford geophysics professor William Ellsworth called the research “the first to provide an answer to the questions of why some wastewater injection causes earthquakes, where it starts and why it stops.” Most of the water occurs naturally, mixed with oil and gas deposits, and is too brackish to treat, Ellsworth said. That leaves the option of pumping it back underground. The key, he said, is how deep.

At shallow disposal wells penetrating roughly a half-mile, the researchers detected only a “subtle uplift” of the surface above “a thick layer of nearly impermeable rock,” and little pressure increase on fractures and cavities deeper down where earthquakes originate.

But in deep wells more than a mile below the surface, the Stanford team found, “the combination of stiffer rock and the impermeable ‘blocking formation’ above allowed [pressure]to migrate downward and build up until it triggered earthquakes in 2012 along an ancient fault line.” In 2013, quakes abated after injections were reduced and pressure decreased. 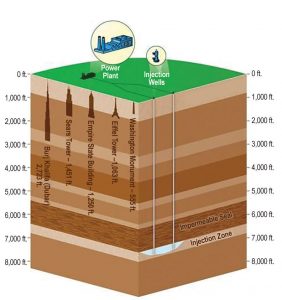 “Injecting at a shallower depth above a blocking formation” would diminish the ability of increased pressure to “activate the faults,” Ellsworth said.
But the EPA says to permanently confine CO2, injection must take place below, not above, a blocking formation or “cap rock.”
In the agency’s words, “Suitable formations for CO2 sequestration are located under one or more layers of cap rock, which trap the CO2 and prevent upward migration.” An illustration provided by the EPA depicts an “impermeable seal” some 6,000 feet below the surface with the “injection zone” underneath. Thus, the EPA’s prescribed method of CO2 disposal appears to replicate conditions the Stanford researchers say caused the Texas fault to move.

The question persists: If they can no longer be built without CCS, and if CCS carries excessive risk of causing earthquakes, are some of the most reliable electric generation methods doomed? A simpler question would be whether that was always the point.