Starting over on embattled regulations 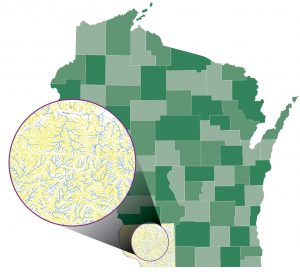 A map depicting Grant County and provided by the EPA in 2013 illustrates the difficulty of moving very far in any direction without contacting a potential “Water of the United States.” Light blue indicates perennial streams; yellow indicates “intermittent” streams that “contain water for only part of the year.”

Half the country is certain to be angered and the other half delighted by Trump administration executive orders sending federal agencies back to the drawing board on controversial regulations of recent years.

Another strong bet might be that three people will simply be relieved: the federal judges on the U.S. 6th Circuit Court of Appeals who can spare themselves deciding if the Environmental Protection Agency (EPA) and Army Corps of Engineers (Corps) acted lawfully by enacting the Waters of the United States (WOTUS) regulation a little less than two years ago.

In October 2015, the judges agreed on one thing: they would not allow enforcement of the WOTUS rule before challenges from more than half the states and a host of regulated entities were resolved. But they arrived at that conclusion by different paths, not in concert. Their order staying the WOTUS rule came not on a vote of 3-0 or 2-1, but 1-1-1, and any later decision on the merits of the case would have been appealed to the Supreme Court.

The Supreme Court might in any event have ended the 6th Circuit’s role, having agreed in January to decide whether appellate courts or the lower district courts were the appropriate forum for challenging WOTUS. Neither challenges nor venues to hear them were in short supply: along with a multitude of interest groups, 27 states filed a total of four lawsuits to block the rule after it was finalized by the EPA and the Corps in the summer of 2015.

Arguments over the reach of Clean Water Act (CWA) regulatory authority have long occupied the federal courts. Congress adopted what were hoped to be clarifying amendments in 1977, and again ten years later. Meanwhile, a 5-4 U.S. Supreme Court ruling in 2006 held that CWA authority depended on a “significant nexus”—in the words of Justice Anthony Kennedy—between an area to be regulated and a navigable waterway or tributary.

Clarity matters, because being subject to regulation could require obtaining a federal clean water permit for routine agricultural or other activities—say, construction or maintenance of electric utility lines—on what would be dry land literally all except a day or two per century.

The EPA and the Corps maintained that multiple court rulings had led to confusion and in 2014, they jointly proposed to redefine the “Waters of the United States.” In a congressional hearing that year, then-Deputy EPA Administrator Robert Perciasepe said the WOTUS rule would “clarify the jurisdictional scope of the Clean Water Act, simplifying and improving the process for determining waters that are, and are not, covered by the Act.”

Much depends on one’s understanding of “simplify.” For instance, the rule exempts from regulation “certain intermittent and ephemeral ditches,” defined in explanatory notes on EPA maps as streams that flow “only in response to precipitation events.” But those same notes say “many ephemeral streams are included in the ‘intermittent’ category.”

Standards placed in the WOTUS rule by the EPA specify that regulation might cover any piece of ground within a 100-year floodplain or within 4,000 feet of any regulated water body.

Close analysis showed that across wide swathes of the country, it would be impossible to move more than a few feet in any direction without stepping into federal jurisdiction. In September 2015, the American Farm Bureau Federation released maps showing three areas in Wisconsin of approximately seven square miles each and appearing to be mainly land, not water, in Columbia, Grant, and Wood Counties. In each case, the Farm Bureau said, “The area of possible regulation covers the entire map.”

Certainly it can be argued that the use of qualifiers like “could,” “possible,” and “potentially” signals an interest group inflating its concerns. The counterargument is that it perfectly illuminates a threat to private land use rights posed by the ambiguity the EPA and Corps said they would remedy, when regulatory action depends on case-by-case decisions with fines reaching tens of thousands of dollars per day in the balance.

The Trump executive order signed February 28 directs the EPA and Corps to open a “notice-and-comment” rulemaking to develop a new rule revising or rescinding the WOTUS rule. Revealed by documents circulated within the Department of the Army in the spring of 2015, the history of the original rule’s development suggests the Corps might not mind a do-over.

Made public in July 2015 by the House Committee on Oversight and Government Reform, extensive Army memoranda detailed what Corps officials saw as a pattern of EPA indifference to technical problems the Corps said would produce an unworkable rule likely to be overturned in court. 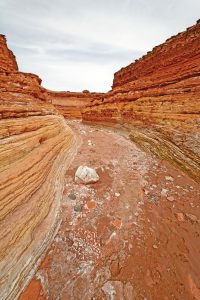 A potential “water of the United States,” according to the Corps of Engineers.

Particularly telling was an April 24, 2015 memo from the Corps’ Chief Legal Counsel David Cooper saying the EPA’s “assertion of jurisdiction over every stream bed has the effect of asserting CWA jurisdiction over many thousands of miles of dry washes and arroyos in the desert Southwest.”

Cooper added that “edits or ‘fixes’ to the rule” recommended by the Corps were dismissed by the EPA, leaving the final rule “legally vulnerable, difficult to defend in court, [and]difficult for the Corps to explain or justify.” Two years later, Cooper could cite four federal judges who are at least open to the possibility he was right.

But if the EPA had difficulty working with the Corps, it enjoyed close cooperation with outside groups recruited to manipulate public comments on the WOTUS proposal, in “a campaign that tests the limits of federal lobbying law” according to a New York Times investigative story published May 18, 2015.

The 90-percent favorable comments (out of one million) received by the EPA were “orchestrated,” the Times reported, in legally adventurous coordination with outside political groups.

Similar manipulations discovered more than a year earlier by the Wisconsin Electric Cooperative Association found apparently fabricated public enthusiasm for the rule, exposed by identical quotes attributed simultaneously to different people in several states, in press releases prepared before the rule’s content was released to the public.

Finalizing a new rule will take at least a year.

It hadn’t happened by deadline for this month’s Wisconsin Energy Cooperative News, but another wide-ranging executive order, sending the EPA’s power-plant carbon dioxide regulations back to square one, was expected imminently from President Trump.

Unofficial reports said as with the WOTUS rule, the order would prescribe a new rulemaking articulating a rationale for withdrawing and replacing the Clean Power Plan (CPP, for existing generation facilities) and the New Source Performance Standard (NSPS) for plants yet to be built.

It was expected, again as with the WOTUS rule, that the Justice Department would ask the courts to delay actions on the CPP until the new rulemaking is done. Oral arguments on the CPP were heard by the U.S. Court of Appeals for the District of Columbia Circuit last September, seven months after the Supreme Court stayed the regulation and sent it back to the D.C. Circuit for further proceedings. The court isn’t obligated to honor the request and a decision could come at any time.

Unofficial reports also said the order may direct federal agencies to cease using the disputed “social cost of carbon” set by the Obama administration for estimating costs and benefits of regulations. Critics say the social cost metric inflates the monetary benefit of regulations by counting only negative aspects of fossil fuel use such as pollutant emissions, while omitting any positives such as agricultural productivity and availability of base load power.

On March 17, the International Energy Agency said worldwide energy-related carbon dioxide emissions were flat for a third straight year in 2016 while the global economy grew 3.1 percent.

The Paris-based agency said the U.S. cut emissions the most, 3 percent, reaching its lowest level since 1992.