With its neat red barn and towering silos set against 800 acres of rolling fields and cropland, Roehl Acres farm near Loyal in Clark County is the very image of Wisconsin’s Dairyland at its idyllic, pastoral best. This serene setting, owned and operated by a three-generation farm family and home to more than 500 registered dairy cattle, is exactly what you’d expect to see when visiting the number-one dairy-production county in the state. 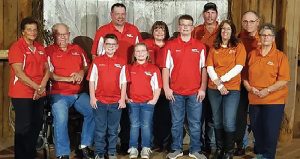 Come July 12–14, however, the sight will take an unexpected turn. As host farm for the 2022 Wisconsin Farm Technology Days (WFTD), Roehl Acres, owned by the Dennis and Suzie Roehl family, will be transformed into a bustling city all its own, with tents housing every kind of agriculture-related exhibit imaginable and demonstrations of all kinds on the surrounding fields. Tens of thousands of visitors are expected to pass through the site over those three days, learning the latest in farming equipment, techniques, and services. Co-hosting the event is neighboring Rustic Occasions, a former dairy barn converted into a wedding and event space, operated by Doug and Kim Roehl.

Both Roehl operations exemplify this year’s WFTD theme of “Tradition Meets Technology.” Purchased in 1967 by Dennis Roehl’s parents, Roehl Acres began as a traditional dairy farm and adapted to new technologies over the years to include the latest in robotic milkers today. Rustic Occasions showcases some of the unique possibilities for dairy farms to expand into agritourism.

On its surface, Farm Technology Days may seem to be an event for just farmers, but its relevance extends to anyone with a stake in the agriculture industry, and that’s just about everyone who lives in Wisconsin. After all, agriculture is a huge economic driver here, pouring a whopping $104.8 billion annually into the state’s economy, according to the latest Wisconsin Department of Agriculture, Trade and Consumer Protection statistics. Those same statistics show agriculture provides 435,700 jobs, or 11.8 percent of the state’s employment.

Furthermore, WFTD is a spectacle not unlike a great amusement park, with entertainment mixed in with the educational displays and all the services needed—including parking, plenty of food stands, and a family care area for simple child-care needs—to make for a fun-filled, family-friendly day. 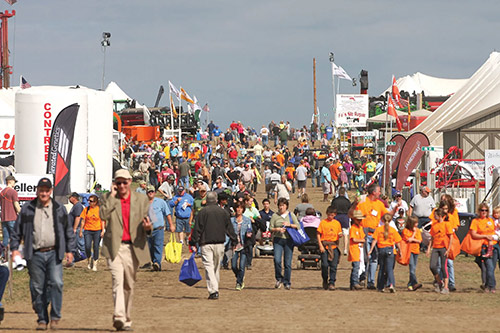 “For first-time visitors, I would just say in general they would be amazed at all of the things that are packed into this event,” said Mike Ruff, director of operations at Clark Electric Cooperative and a member of the 2022 WFTD Executive Committee. “Tent City is huge and everything is built on a farm that otherwise has none of this on it. But by the time of the event there will literally be a small city there that’s packed with events and equipment, everything from lawn mowers and small tractors all the way up to the big equipment that farmers use.” 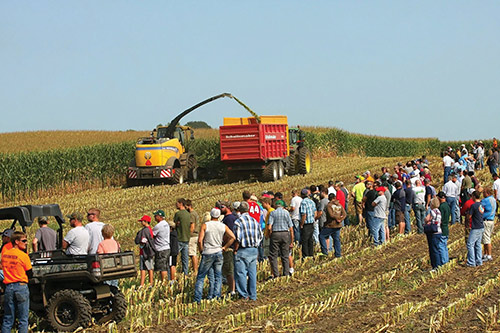 Activities beyond the many exhibits include tours via tram of Roehl Acres, where guests can watch the robotic milkers in action and take the opportunity to feed a calf, and of the Rustic Occasion event barn, where there will be cooking demonstrations and a dance club. Guests can also see vintage equipment at the Heritage Display, watch a demonstration of old-time “checkrow” planting and cultivating at the Heritage Plot, and check out the horses in the equine tent.

New this year is Farm Tech Fest on July 13, an evening of country music featuring Joe Nichols, Sawyer Brown, and Madison County. In addition, camping is available on site for both exhibitors and attendees for the first time this year.

As one of the 24 volunteers to serve on the 2022 WFTD Executive Committee, Ruff has been heavily involved in the planning for this year’s event, but he’s just one of many Clark Electric Cooperative representatives to contribute. The co-op is a silver-level sponsor of this year’s Farm Technology Days, and virtually all employees and directors are donating their time and service in one way or another, whether it’s by serving on one of the planning committees, helping to set up temporary electric service at the site, staffing one of three planned co-op exhibitor booths, or volunteering with any other service during the event itself.

“Farm Tech Days is the premier event for farming and the agriculture community,” Clark Electric General Manager and CEO Tim Stewart said. “It takes a lot of people and a lot of resources to make this event happen. Clark County has some of the largest concentrations of farms—dairy farms in particular—of any county in Wisconsin, and the vast majority of those dairy farms are on our lines, so we felt that we really needed to be a major player in helping this event be as successful as it could be.”

Furthermore, Stewart pointed out that WFTD has a direct impact on the significant portion of the co-op’s membership that farms.

“This really focuses on farming and technology, and margins have gotten razor thin in farming,” he added. “So an event that showcases advances that help make farming more profitable is something that we really need to be promoting and be involved in.” 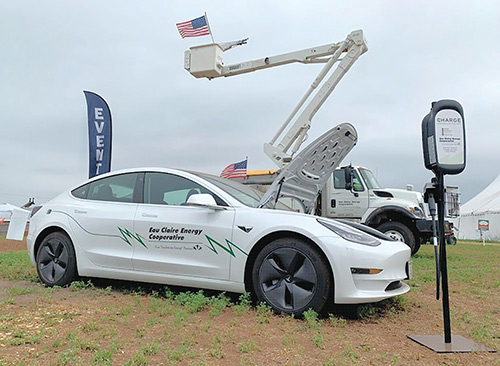 One of the co-op’s major contributions to the event is setting up the temporary electric service needed to power Tent City. Ruff explained that the co-op has a primary line running along the west side of where Tent City will be located. The co-op is donating use of the materials and equipment to establish temporary service from that line, with Clark Electric operations personnel among those volunteering their time to do the work. After the event is finished, the entire system will be taken down.

Clark Electric’s presence will be felt in the air as well as on the ground. A special feature of this year’s WFTD will be the Touchstone Energy balloon, courtesy of Clark Electric and Touchstone Energy. The last time the Touchstone-branded hot-air balloon made an appearance at Farm Technology Days was the last time it was held in Clark County—in 2005 at Malm’s Rolling Acres near Loyal. Alice in Dairyland was one of many guests at that event to take a tethered balloon ride. Weather permitting, tethered rides in the balloon may be available this year as well, with the current Alice in Dairyland on hand to take a ride if the opportunity arises. 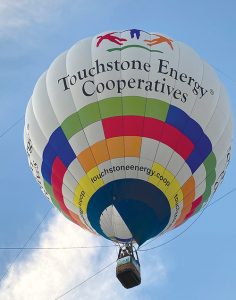 In addition, Clark Electric will be partnering with some neighboring electric cooperatives in showcasing a variety of electric vehicles across from where the Touchstone balloon will be set up.

Clark Electric’s significant role in Farm Technology Days is a perfect example of the Seventh Cooperative Principle, “Concern for Community,” in action. Last year’s WFTD brought more than 52,000 people over three days to Huntsinger Farms in Eau Claire. That’s roughly one and a half times the population of all of Clark County.

“It’s a tremendous undertaking,” Stewart said of the event. “It involves a lot of volunteers to make it work.”

Volunteers are needed to take care of everything from staffing the tents, conducting the tours, parking cars, taking care of garbage and recycling, and mowing and trimming the grounds. Ruff said the Executive Committee tallied about 20,000 volunteer hours that are needed to simply staff the three-day event, not including the time to set up the site and break it all down afterward.

Local businesses, organizations, school groups, and individuals all step up and work together to make it all happen.

“I think this event really exemplifies that seventh principle, with small co-ops and small towns coming together for the good of the whole community,” Ruff said, adding that Clark Electric personnel will be working alongside volunteers from Excel Energy as well as local electricians—most of them Clark Electric members themselves—to set up and break down the temporary service system for Tent City.

Just as the many community groups and individuals give generously to support Farm Technology Days, the event gives right back.

All in all, visiting WFTD is a great way to experience the Dairy State at its very best.—Mary Erickson