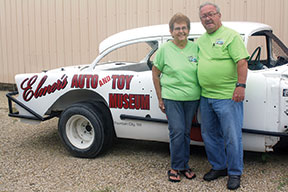 It all started with a single pedal car. In 1971, Elmer Duellman of Fountain City bought a pedal car at a swap meet. 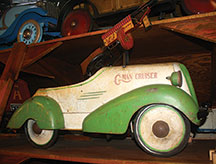 Swelled so much, in fact, that between the full-size autos and the toy cars—not to mention all the other treasures he found along the way—it wasn’t long before Elmer and his wife, Bernadette, had enough collectibles to open a museum.

And so they did. Elmer’s Auto and Toy Museum, located atop Eagle Bluff in Fountain City, along Riverland Energy Co- operative’s lines, houses the Duellmans’ 50-year collection of antique, classic, and muscle cars; pedal vehicles of all kinds; vintage motorcycles and scooters; classic bicycles, including some mid-1800s models with the large front wheels; a newly created display of vintage snowmobiles; and rows upon rows of antique and collectible toys of all kinds.

Now in its 23rd season, the museum is a popular stop for car and toy enthusiasts as well as visitors who just want to enjoy the nostalgic step back in time that a stroll through the museum’s ﬁve buildings offers. Many visitors bring lunch and settle in at one of the picnic tables on the grounds, taking in the spectacular view from the museum’s backyard on Eagle Bluff, the highest point along the Mississippi River.

“We call it the best-kept secret in Wisconsin,” Elmer said.

It All Started with Autos 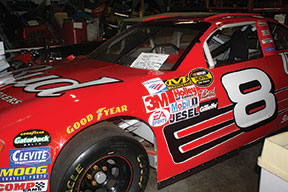 Actually, long before that ﬁrst pedal car, it started with cars. “I’ve been a motorhead all my life,” Elmer said.

Cars have always been part of his life both vocationally—he and Bernadette ran Elmer’s Auto Salvage together for many years—and as recreation. A self-described “car racing nut,” Elmer’s visited 105 different race tracks; he’s attended the Daytona 500 50 times. Elmer even raced cars himself for a short time in the 1960s and has sponsored many race cars as well.

Some unique NASCAR pieces that are part of the Duell- mans’ collection include the side panel off Dale Earnhardt’s race car and Dale Earnhardt Jr.’s #8 NASCAR race car. Both are on display along with other vintage race cars. 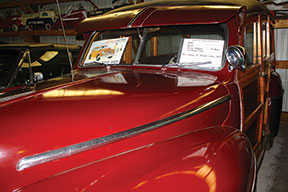 It doesn’t have to be a race car, however, to catch Elmer’s eye. Elmer noted that many of his vehicles were not purchased as investments—he bought them long before they became valuable collectors and simply kept them in good condition.

The Duellmans’ collector cars—all three buildings’ full—are in working order. Elmer and Bernadette take some of them out from time to time for special occasions and community events. The entire collection sparkles; each car, whether it’s taken out for a spin or not, is washed every other Thursday.

This fire truck is one of the 700 pedal vehicles in the collection.

The toy collection that started with a single pedal car grew into one of the largest pedal vehicle collections in the world, at more than 700. They come in all forms, including race cars, trucks, ﬁre trucks, planes, and tractors.

Some are kept in a barn that’s ﬁlled with some of the oldest pieces of the Duellmans’ collection, including antique Model Ford cars, wooden sleds and toboggans, soap box derby cars, wagons, and train sets. 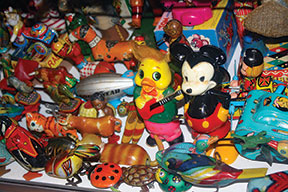 However, the toy collection is not limited to things that go. Next to the barn is a toyshop bursting with bright, colorful toys grouped according to their time and style. There are character toys, circus toys, wind-up toys, and pull toys made of everything from cast iron to rare Japanese tin. There’s a collection of Dukes of Hazzard toys and displays of Christmas and Halloween toys. Elsewhere, an impressive doll collection icludes Shirley Temple dolls, baby dolls, and china-faced dolls from the 1850s, still dressed in their original clothing.

When asked to name a favorite item of their collection, neither Duellman is able to settle on just one. They enjoy their entire collection, having acquired each piece simply because they liked it. As the collection grew, it became apparent that many other people enjoyed it as well.

“We’d been collecting for a long time and people wanted to see what we had,” Bernadette explained. “So we decided to open this to the public once a month, but that wasn’t enough. So we went to one weekend, and that still wasn’t enough.” 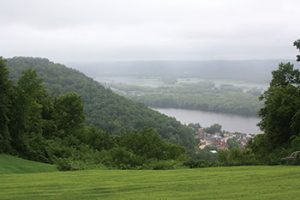 Magnificent view from the top of Eagle Bluff in Fountain City.

The couple settled on opening their collection to the public twice a month from May through October, sometimes with special activities to complement the museum tour. For example, the museum will be open Labor Day weekend, with bluegrass music performed live on the grounds on Labor Day after- noon. On September 17 and 18, the museum will feature a display of vintage race cars, with some local drivers on hand. The museum will be open for three weekends in October—1 and 2, 8 and 9, and 15 and 16—providing extra opportunity for guests to take in the beautiful fall colors from the bluff-top view.

The Duellmans also host visits from tour buses, car clubs, and other groups, and they are happy to open the museum for visitors at other times with advance notice. If someone is interested in seeing what they’ve collected, Elmer and Bernadette are interested in showing them.

“That’s my favorite part,” Elmer ﬁnally answered when asked about his favorite piece. “I like to share it all with other people.”

Elmer’s Auto and Toy Museum is located at W903 Elmer’s Road, Fountain City. Con- tact the Duellmans at (608) 687-7221 or mail to elmerstoys@yahoo.com. To learn more, visit www.elmersautoandtoymuseum.com or visit the museum’s Facebook page.