You can’t miss the Toad House. The bright yellow letters propped in front of this bakery/bistro/coffee shop/art gallery announce its presence loud and clear to anyone entering Ladysmith from Highway 27. Lured in by the quirky signage, you might be tempted to linger on the front porch, maybe settle into one of the inviting chairs for some coffee and conversation, but the aroma of fresh-baked goods will eventually draw you inside.

Once there, you’ll find made-on-site European pastries and locally sourced, seasonal lunch items that are reason enough to visit. The adjoining art gallery, filled with work by local artists, is another draw.

However, Toad House is much more than just an artsy eatery. It’s a creative hub and home base for the artists who make up the Rusk Area Arts Alliance (RAAA). The building hums with constant activity, and not just from the scheduled art classes, book signings, performances, and other such events that are regularly held here.
On any given day that Toad House is open, a guest may stop by for a cup of coffee and a kipfel and end up being treated to an impromptu demonstration by an artist finishing up a piece of work along with lunch, or a spontaneous recital at the piano in the corner.

Drop-in opportunities are abundant. Guests are welcome to draw or paint with an RAAA artist who’s on hand most Friday afternoons. On Saturday mornings, visitors can wander upstairs to the fiber arts studio or the weaving studio to watch artists at work on their looms. Pint-sized visitors can join in the fun at the “Toad-ally Artsy Kids’ Events” held each Saturday morning.

There’s always something going on here: Like its namesake, this place is always hopping.

It Started with a Poem 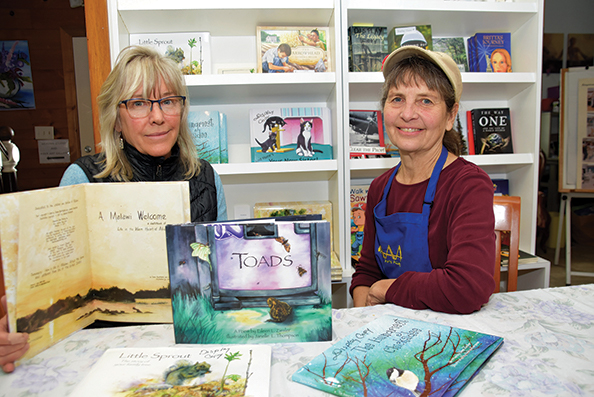 The inspiration for Toad House’s name came from a children’s book written by Eileen Ziesler (right) and illustrated by Janelle Thompson (left).

Open since 2013, Toad House is owned by Eileen Ziesler and her husband, Tony. Although the business has only been open for five years, Toad House’s story actually began 25 years ago with a chance encounter at a vending machine. Eileen recalled that she and Tony had been boating on a hot August day in Bayfield, and as they returned from the water in the evening to get something cold to drink from a soda machine at the edge of the dock, Eileen noticed a big toad on the ground, watching for bugs against the light of the machine.

“I looked for it again the next day,” she said. “I was thinking, ‘Where can he be? Where can be he?’ And out of that this whimsical poem about toads came about.”

A former teacher, Eileen would read her poem to her students and have them imagine where the toad could have 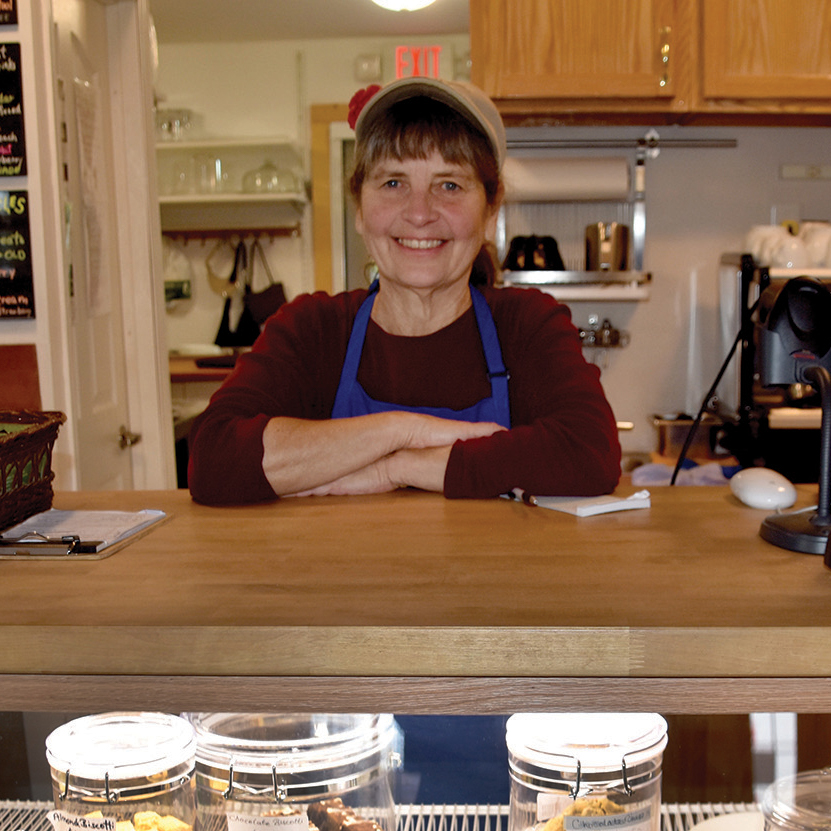 gone. One of her very first students was the daughter of a talented watercolor artist—Janelle Thompson. After retiring from teaching about 10 years ago, Ziesler reconnected with Thompson and formed a publishing partnership, with Thompson creating watercolor images to illustrate Ziesler’s poem.

They spent about a year and a half pitching the finished product to possible publishers, all of whom rejected it. However, many offered words of praise and encouragement, so the two women pressed on and eventually self-published a hard-cover picture book called “Toads.” Ziesler named the publishing company Toad House Publishing. 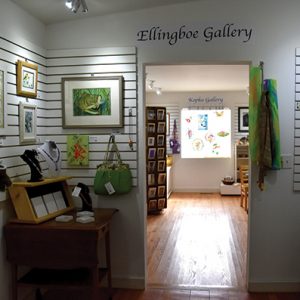 The leap from Toad House Publishing to Toad House came a few years after “Toads” was published. Eileen and Tony had returned to her hometown of Ladysmith and were ready for a new project. At the same time, the artists of RAAA were looking for a landing spot where they could hold classes, sell their artwork, and promote the arts.

The Zieslers purchased the 1905 house on Lake Avenue West with an eye toward turning it into a coffee shop/bakery and art gallery that could showcase the work of local artists. Doing much of the work themselves, the Zieslers spent three years renovating the building. Initially, Toad House offered just coffee and European-style baked goods, made from recipes handed down by Tony’s mother from her native Austria. Toad House evolved gradually into the mix of purposes that it is today with the help of some loyal customers.

“We’ve had some very interesting people come in and kind of layer their talents on top of this,” Ziesler said. First, a customer suggested that Ziesler serve soup, so she began offering soup on Fridays. The next suggestion was to serve soup each day Toad House was open, and then to expand the menu. 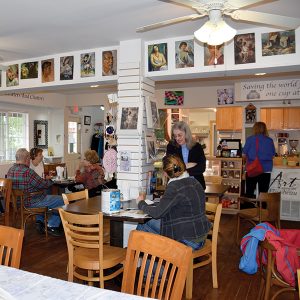 Today, Toad House offers four home-cooked lunch options on the days it’s open: soup, salad, quiche, and a sandwich or pizza. Specific types depend on what’s in season. Ingredients are organic and purchased locally, with many fresh vegetables coming from Ziesler’s own garden, or those of the two employees who work in the kitchen with her. Adding the lunch offerings enables Ziesler to meet the bills and pay her two employees; she and her husband donate their own time.

Toad House has two employees, but it’s nurtured by a network of people who contribute to the business’s rather creative way of meeting work needs while keeping costs low. The building’s gift gallery is filled with art made by members of RAAA. Toad House itself takes no commission; rather, 20 percent of the sales are directed into a fund that provides stipends for people to help with additional needs, from greeting customers to overseeing Saturday morning kids’ activities.

Among the longtime area artists who are active in RAAA are Jump River Electric Co-op members Clarence and Sue Anderson. They’ve been creating unique keepsake boxes out of logs, many found on their own farm property, for 30 years.

The Andersons say the local art scene was very different before RAAA was formed about 10 years ago, with Toad House centering the group a few years later. 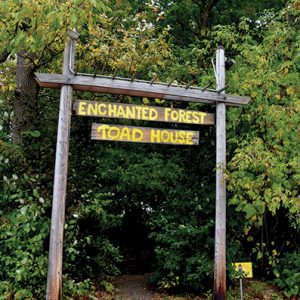 A visit to Toad House is not complete without a walk through the wooded pathways of the adjacent “Enchanted Forest,” where all kinds of surprises await. Toads dominate the whimsical decor, both indoors and out.

“Before the Toad House and even RAAA I had no idea there were so many artists around here,” Clarence said. “People have gotten to know each other where before they didn’t have any idea who everyone was.”

The couple said Toad House has helped increase visibility of local artists and promotes Rusk County as an artistic place by providing a means of sharing art with a wider community.

“[Before Toad House] most of the artists went out of the area to sell their work,” Sue said. “We used to go all over to crafts shows and this kind of thing to sell our boxes, and when we’d tell people where we lived they had no idea where Rusk County is. I think [Toad House] has helped a lot in just letting people know about the local artists that are here.”

They’re not hard to find now. All you have to do is hop on over to the Toad House.—Mary Erickson 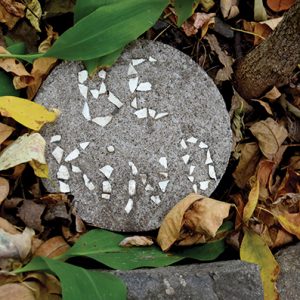 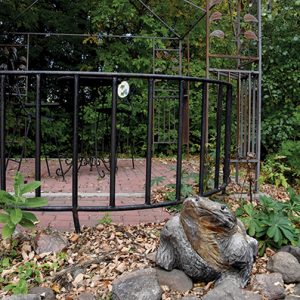