We like it because it’s the nearby hardware store where we can get what we need. It’s where we meet friends for coffee. It’s the shop where they look us in the eye and smile. It’s a word of warmth that makes us feel known.

Local also means your electric co-op. It’s as local as you and your neighbors because you own it. It’s grown and changed with you, possibly starting before you were even born. Because it’s made up of you and your neighbors, it’s as unique to each community as you are. And it changes to help out with the community’s needs, whether that means bringing electricity to farmsteads 80 years ago or helping to navigate COVID-19 challenges today.

October is National Co-op Month, and this year it’s especially meaningful to reflect on what it means to be local given the many changes we’ve all seen over the past eight months.

As we all face the fallout from the effects of COVID-19, electric co-ops are adapting as the virus changes everything from the national economy to how we stay connected to our neighbors. 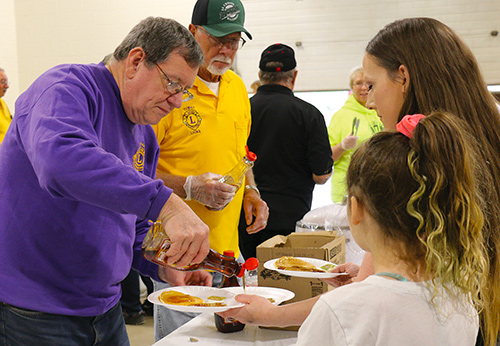 Oakdale Electric Cooperative typically serves up a pancake breakfast to up to 1,500 members during its Member Appreciation Celebration each October, as shown in this scene from last year’s event, which broke attendance records. 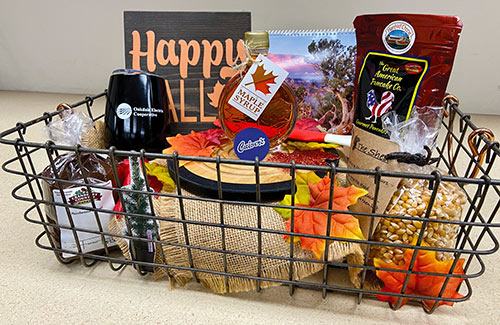 This year, Oakdale Co-op is bringing a basket of pancake breakfast fixings to 50 of its members instead.

Take our Co-op Month celebrations, for example. A typical October will see electric co-ops throughout the state hosting lively gatherings that bring hundreds of members together for a picnic, pancake breakfast, or cookout. In most cases these member celebrations have far surpassed the annual meetings as the largest attended member gathering on the co-op calendar. This year the need to protect public safety in the face of a still-dangerous virus has meant October Co-op Month won’t look the same.

However, just as electric co-ops came up with innovative ways to conduct their annual meetings while keeping staff and members safe (see “Business Not As Usual,” June 2020 WECN), co-ops are now finding creative ways to celebrate October Co-op Month in their local communities.

Putting a Twist on It

At Oakdale Electric Cooperative, an annual Member Appreciation Day celebration typically sees more than 1,500 members of all ages come to the co-op headquarters for a morning of fun including a pancake breakfast; games and activities such as bounce houses, balloon arts, and kids’ crafts; and displays where members can learn more about their co-op’s services.

The celebration has become a tradition in the community that Oakdale Electric didn’t want to let go, despite the pandemic. So the show is going on as usual, albeit with a twist. This year, the co-op is bringing breakfast to the members in an event billed as “The Co-op Comes to You.”

In the five days that would typically lead up to the Member Appreciation Day event, the co-op will hold drawings for 50 baskets filled with fixings for a pancake breakfast as well as items that represent other aspects of the event, including a handcrafted gift item and a tree seedling to represent the popular booth about vegetation management. Winners will be announced on the co-op’s social media channels, with baskets hand-delivered to the winning members’ doorsteps. Everything in the baskets—from the pancake mix to the syrup to the fall décor items—comes from local businesses and community members, the majority of them co-op members.

“It was so important to us that we still do something to give back to the members, and that we offer something fun and raise spirits while supporting our local businesses as well,” said Deana Protz, public relations & communications specialist at Oakdale Electric Cooperative.

Richland Electric Cooperative is also putting its annual Member Appreciation Picnic in reverse, taking the festivities to the members instead of bringing the members to the co-op. In a typical October, Richland Electric’s service center is transformed for an afternoon into a festival atmosphere, with bounce houses, games, picnic tables, and a line of grills where co-op employees turn out brats, hot dogs, chicken breasts, and pulled pork to about 300 members and guests. The annual event is also used as a vehicle for raising funds and donations for community needs, with food drives and collections for flood relief, for example. 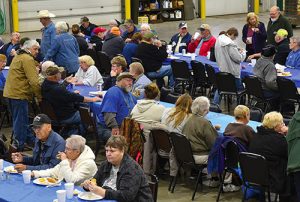 October Co-op Month celebrations typically bring hundreds of members together, such as in this photo of a past Member Appreciation Picnic at Richland Electric Cooperative.

While the picnic itself had to be canceled this year for safety reasons, the co-op saw no reason to cancel the fun, or the opportunity to give back to the local community.

“We found a way to give back to our members and our community all at once,” said Trevor Clark, director of outreach services at Richland Electric. “We are doing a drawing every day in October for a $50 gift card to a local business. One of our cooperative principles is Concern for Community and we wanted our community to know we are there for them.”

As did several other cooperatives, Richland Electric also utilized the local pages of this magazine to host pandemic-safe Co-op Month activities, including co-op-themed trivia contests for prizes as well as coloring contests for children.

No such thing as a typical co-op

Today, 900 electric co-ops provide electricity to more than 20 million businesses, homes, schools and farms. They cover more than half the land in the United States. They employ more than 68,000 people and invest $12 billion a year in local economies, contributing $88.4 billion to the nation’s Gross Domestic Product.Because electric co-ops are so uniquely local, it’s hard to describe a typical cooperative.

Another way to look at that variety is by the average number of members served by each mile of its power lines. The co-op with the densest population serves 78 members for each mile of line. The most remote co-op averages less than one person per mile of line.

Breakfast on the Go

Price Electric Cooperative is one of several co-ops in Wisconsin taking a different approach, maintaining its popular October Co-op Month Breakfast in the Northland while adhering to safety guidelines. Rather than host the usual pancake breakfast, held in a different part of the co-op’s service territory each year to maximize access for all members, the co-op is offering a drive-through breakfast this year.

“Breakfast in the Northland is always a great opportunity to give back to our members and to show our appreciation to them; there was no question that we needed to find a way to make that happen as safely as possible,” said Theresa Raleigh, manager of member services at Price Electric. “I noticed the dairy farms doing their breakfasts drive-through style and knew that was the solution we were looking for.”

Working with a local caterer, the co-op will be handing out to-go boxes filled with breakfast wraps, juice, and sides to members as they drive through the parking lot of the co-op’s service center. Typically held on a Saturday, the event will be held on a Friday morning this year to accommodate members on their way to work.

A drive-through theme will be incorporated into celebrations at Central Wisconsin Electric Cooperative (CWEC) and Pierce Pepin Cooperative Services (PPCS) as well. Both co-ops typically hold well-attended gatherings each October with a variety of features, all of which have been modified this year so they can be conducted safely, without members having to leave their vehicles.

At PPCS, members will be able to drive up to the co-op’s service center and drop off items for a food drive and/or a collection of children’s winter outerwear. Liz Gunderson, communications coordinator, said plans call for safe distancing to be maintained by having members hand off their donations to linemen outfitted with either an extended stick or rubber gloves. Flu shots will be available as planned, although they’ll be administered safely by public nurses through car windows. Members will also be handed a take-home picnic supper as they drive through.

The co-op is working some pandemic fun into the evening as well, with a prize given to the member wearing the most interesting or unusual face mask.

At CWEC, the traditional Member Appreciation Breakfast is held close to Halloween, with the event taking on the feel of a holiday party. The breakfast is also used as a kick-off for the co-op’s annual toy drive, a project coordinated through CWEC’s longstanding partnership with the U.S. Marine Corps Toys for Tots campaign.

This year, the toy drive will go on as always, as will the annual food drive. Members can deliver their donated items and pick up breakfast to-go, and also bring personal documents to be shredded, all without leaving their vehicles.

As for the Halloween fun, while the co-op will not hold its usual costume contest for its youngest members, children will still be handed a bag of Halloween treats as their families drive through.

Whether they’ve turned to drawings or carry-out picnics, or have simply held off an in-house gathering for a safer time, co-ops are adjusting their Co-op Month celebrations in a way that works best for their own unique members—meeting their own local needs the best way possible.

The world keeps changing, and electric co-ops will continue to adapt. Each co-op’s approach may differ, but they’ll do whatever it takes to adapt in ways that make the most sense for the people in their community. That’s what it means to be a local electric co-op.