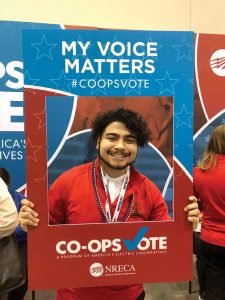 WECA BROADBAND RESOLUTION ADOPTED AT NRECA ANNUAL MEETING
Delegates at the National Rural Electric Cooperative Association (NRECA) Annual Meeting voted overwhelmingly to adopt a broadband resolution submitted by the Wisconsin Electric Cooperative Association.
Resolution 8-A urges NRECA to take a prominent leadership and advocacy role in the U.S. Congress, with the administration, and at the Federal Communications Commission (FCC) to ensure cooperatives have the ability to provide broadband voluntarily, on their own, or in partnership with other local providers in rural America.
Under the resolution, NRECA will advocate for reforms in the FCC’s National Broadband Map to more effectively utilize state and federal investment in rural broadband. This is important because census block reporting by telecommunication providers vastly overstates coverage since an entire area is counted as “covered” if, in reality, only one household actually has service. Like the general census, a more accurate picture of who has coverage can affect who is eligible for programs and funding.
According to the resolution, “…we support more accurate federal mapping using granular data and/or other available information to better reflect actual broadband services and speeds provided. Leadership from NRECA is critical to present a unified voice for America’s electric cooperatives by working together with other rural/industry advocates…”
Delegates approved the resolution by a vote of 566 to 22.

“Multi-state entities that are regulated in any fashion by any Minnesota agency are rightfully concerned with the breadth and scope of this reasoning. Any project that physically crosses state lines will certainly be subject to additional uncertainty.”

The Wisconsin Public Service Commission voted last month to approve construction of the $700 million renewable-enabling Nemadji Trail Energy Center, which will be constructed in Superior by Dairyland Power Cooperative and Duluth-based Minnesota Power. The Minnesota Public Utilities Commission also previously approved the plant, but an appeals court intervened and ordered the agency to conduct an environmental review.
The legal dispute challenges the constitutionality of the Minnesota court’s attempt to require an environmental review for a project based out of state.
In asking the court to grant a Petition for Review and overturn the decision to require the review, the
coalition brief states, “Multi-state entities that are regulated in any fashion by any Minnesota agency are rightfully concerned with the breadth and scope of this reasoning. Any project that physically crosses state lines will certainly be subject to additional uncertainty.”
The 625-megawatt Nemadji Trail center is part of the plan by the utilities to increase wind and solar sources and move away from coal plants. According to Dairyland Power, the combined-cycle natural gas facility will serve as the “power behind the power” supporting renewable energy investments, and providing reliability when the wind doesn’t blow and the sun doesn’t shine.
The Nemadji Trail Energy Center is scheduled to be in service by 2025.