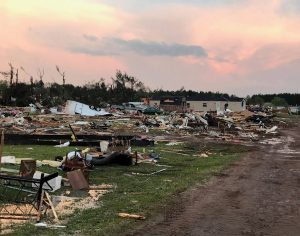 When the season turns from winter to spring, cold and warm weather systems collide over the Midwest, sometimes with violent results. So it was on May 16, 2017, when destructive weather swept across Barron, Jackson, and Rusk Counties and a tornado that stayed on the ground for dozens of miles killed one person near Chetek.

Weather-wise, some years are more active than others. In this state, 2017 was exceptional. An electric cooperative’s own resources are usually sufficient to restore power after a storm, but in just nine weeks last year from mid-May to late July, seven Wisconsin co-ops invoked mutual assistance agreements to get their members’ lights on. After the Chetek tornado, 10 line crews from six other cooperatives were dispatched to the Barron Electric service area. 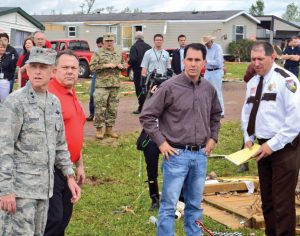 Within hours after that storm, Governor Walker declared a state of emergency extending state assistance to local authorities, including activation of the National Guard as necessary for recovery work. Only months later would an agency’s changing interpretation of its own policies illustrate how complicated a recovery effort could be.

Organized under the Department of Military Affairs, Wisconsin Emergency Management (WEM) coordinates disaster response and recovery efforts in support of local governments. Its responsibilities include administering the Wisconsin Disaster Fund (WDF), a state-financed program to defray the costs of local disaster recovery work. Eligible costs—for instance, debris clearance, protective measures such as securing hazards to the public, road and bridge repair, some labor costs arising from mutual assistance—can be reimbursed up to 70 percent; the remaining 30 percent must be borne locally. 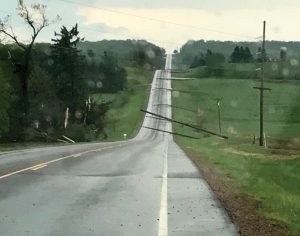 Qualifying for payment depends partly on meeting a federally determined cost threshold for the estimated damage: $3.61 per person across the applicant’s jurisdiction. Last spring three distribution co-ops appeared to clear the per-capita standard, and WEM assisted them in preparing reimbursement applications.

All was well until last fall. Then WEM published a change in its interpretation of program rules reversing previously written policy and past practice that had established co-op eligibility for the program.

The financial impact would be considerable. Preliminary figures submitted by the three co-ops (before factoring in the required 30 percent local share) estimated potentially reimbursable costs at more than three-quarters of a million dollars.

Advised that their applications would be denied because they aren’t local units of government, the cooperatives asked for another look at their situation and WEM proved open to further discussion. 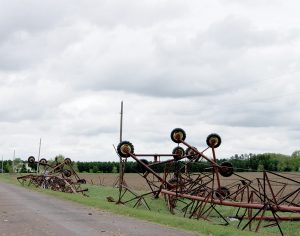 In January of this year, representatives of the Wisconsin Electric Cooperative Association (WECA), the applying co-ops, WEM senior leadership, and the state’s Department of Administration met in Madison. This was the cooperatives’ opportunity to make arguments supporting their eligibility. A second meeting was scheduled for early March, when the applicant co-ops would find out what WEM would propose as a solution.
History was on the co-ops’ side.

WECA representatives were able to document cooperative participation in the Wisconsin Disaster Fund program dating at least to 2011, with several successful applications and payments issued by WEM prior to 2017. 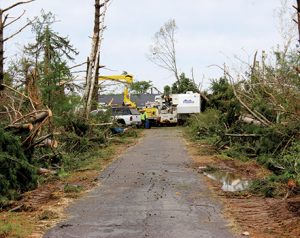 They were also able to cite a 2012 revision to the WDF administrative plan in which the agency used an electric cooperative as an example of a private, non-profit organization providing services of a governmental nature (such as the distribution of electric power, a function of more than 80 Wisconsin municipal governments) and therefore eligible to apply for reimbursement. That administrative plan, they noted, was in effect throughout the time the rejected applications were being prepared and beyond the 30-day window for an eligibility determination. 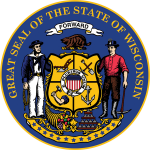 The agency’s position is that Wisconsin law restricts eligibility to local and tribal governments, but at the March meeting it proposed a solution: Co-ops could work with local governments in preparing applications and if they’re approved, WDF funds would be disbursed to the county, which could pass the funds through to the cooperative.
No Second-Guessing There seems to be no disagreement that WEM’s current reading of the law is technically correct; the complications arise from the agency’s past interpretation of the law, combined with explicit co-op eligibility under Federal Emergency Management Agency practices, and the undeniable fact that in situations the WDF was created to address, an electric co-op may be the quickest provider of critically needed services.

As WECA President and CEO Steve Freese, a participant in the January and March meetings, pointed out, “Local governments with very limited numbers of personnel can be overwhelmed by a natural disaster. If it weren’t for what electric cooperatives are often able to do, roads might not be open for responders to gain access to a damaged area.” 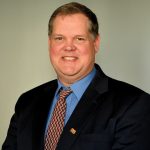 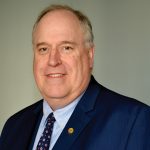 Another participant in the eligibility discussions, WECA Vice President of Operations Tim Clay, noted that co-ops “aren’t responsible for cutting trees off roads but we do it for the general good; to the extent we incur costs for the sake of public safety, in our opinion that’s what the WDF is for.”

Road-clearing is just one example of activities falling squarely within the definition of services reimbursable by the WDF. Whether last year’s Wisconsin co-op expenses for that and other services will be compensated remains to be seen, with rejected applications under renewed consideration.

A key concern in untangling the interpretation of eligibility is that uncertainty over program rules could impede the efficiency of future recovery work, Clay said, noting that disaster response reaches beyond immediate physical danger. “Address the public safety hazards and get the lights back on, because that’s how you reduce the economic impact,” he said. “It’s hard to run a business and keep your employees working without electricity.” 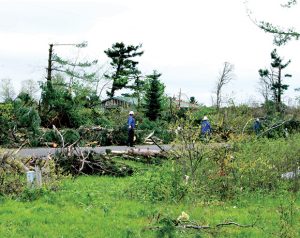 For the sake of an efficient response and economic stability, Clay said,

“Nobody should be second-guessing the rules.” —Dave Hoopman, photos courtesy of Adams-Columbia and Barron Electric Cooperatives, and the Office of Governor Scott Walker.