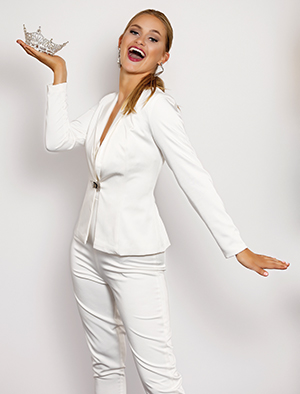 From a very young age, Grace Stanke was going places. Born and raised in Wausau, she skipped 6th grade, started taking college courses as a sophomore, and graduated high school at 17 with enough college credits for an associate degree. She became a classical violinist and a competitive water skier in her spare time. In so many ways, she was exceptional.

In other ways, she was just like her peers. “When I was touring colleges at 16, I was thinking aerospace or nuclear engineering. My dad said, ‘There’s no future in nuclear. Don’t do that.’” So, like a typical teenager, that’s exactly what she did.

Setting out to build her career, and prove her father wrong, not necessarily in that order, Grace enrolled at UW-Madison and found herself immersed in the science of what many call the most reliable source of emissions-free energy at a time when the world is still trying to figure out how to power the planet, without adding to the detrimental effects of climate change. As a college freshman, she participated in a fusion research project on campus, then worked with Constellation Energy, the nation’s largest nuclear fleet at the corporate level. She was, you could say, energized by all that she discovered. 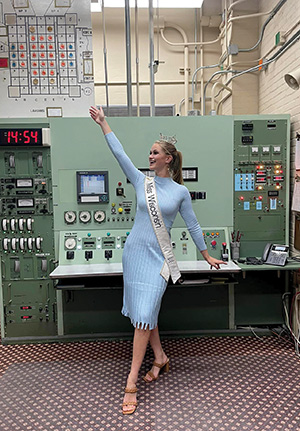 “I was able to learn a lot about nuclear power plants during my time there, and the opportunities for safe, reliable, and clean energy, and I realized we need to be having these important conversations and discussions about the energy crisis and how our energy portfolio needs to change,” she said.

Grace held her own among the seasoned professionals, and Wilson, who also served as her advisor at UW-Madison, said the topic of nuclear energy is reaching new audiences because of her. 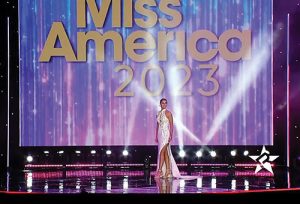 “As Miss Wisconsin, Grace has the opportunity to interact with a diverse cross-section of Wisconsin residents across many age groups, cultural backgrounds, education levels, and interests, some of whom have not engaged with the topic of clean energy. As Grace introduces the topic, she does so with openness, enthusiasm, and lack of judgment, inspiring people to be more aware of the benefits of and need for clean energy,” he said.

In December, Grace sought to shine a brighter light on her initiative when she headed to Connecticut to compete in the 2023 Miss America Scholarship Competition.

“Don’t call it a pageant,” Grace said. The iconic competition has evolved for decades since crowning the first Miss America in 1921. The swimsuit competition is out, and the focus on advocacy, social change, career development, networking, and building the leaders of tomorrow is in. 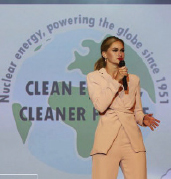 Grace’s social impact statement is “clean energy, cleaner future.” The nuclear engineer did not shy away from her message in the national spotlight. “When I say the word nuclear, what do you think of?” She asked the audience. “I think of warm homes through cold Wisconsin winters.”

During the competition’s red carpet/interview portion, Grace was asked, “Do you believe nuclear fusion could be the future of energy?” Without hesitation, she responded, “I one-hundred percent believe that,” and followed up with an update on the newest promising developments in the technology.

Grace, now 20, acknowledges that nuclear has its detractors, but what some may see as a controversy, she sees as an opportunity for conversation and growth as a state and as a nation. Now is the time to talk facts, she says, and change the narrative to remind people of the many ground-breaking, life-changing, positive impacts of nuclear engineering.

“Nuclear doesn’t have a science or technology problem,” Grace says. “What we have here is a communication problem. Take my dad, for example. He’s a two-time cancer survivor. Nuclear medicine saved his life. He would not be here without nuclear medicine.” (The Positron Emission Tomography, or PET scan, is one type of nuclear medicine. Today, there are nearly 100 different nuclear medicine imaging studies and treatments.) 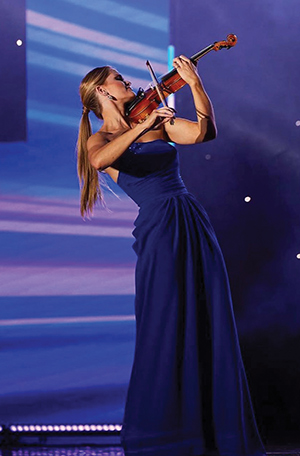 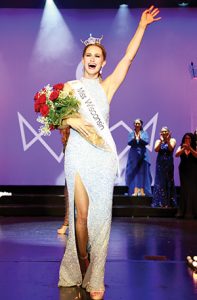 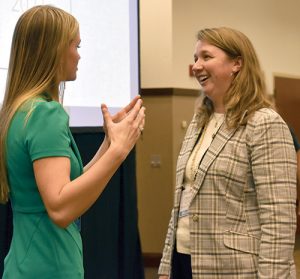 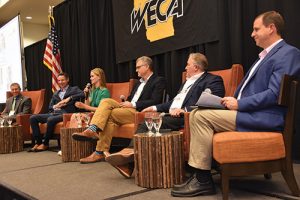 (left) Grace talks with Eau Claire Energy Cooperative President and CEO Monica Obrycki at the recent WECA annual meeting where she also participated on a panel about nuclear energy with industry leaders. (right)

And nuclear energy, she says, is critical to a clean energy future.

“My ideal energy portfolio is diverse. It’s a majority of nuclear—60%, and then 5–10% is fossil fuels. I don’t think we’ll ever be able to completely eliminate fossil fuels, and that’s just the reality. And for the rest, I fully support hydro and wind and solar, as much as we can,” Grace said. “But when it really comes down to it, when we are in the heart of the brutal cold winter, and we need reliable heat, nuclear is one of the only sources of clean energy that can ramp up and meet that demand. So that is my focus. Right now, we don’t need to convince people to support wind and solar. They already do. We need to get more people to support nuclear.”

At the Miss America Competition, Grace shined and showed why she says it’s time to stop “putting people in boxes.” The nuclear engineer won the preliminary talent competition with an exceptional performance as a classical violinist. It was just the beginning.

At the culmination of the competition, on the evening of December 15, 2022, Grace was crowned Miss America 2023, the third Miss Wisconsin ever to take the national title, which comes with a $50,000 scholarship.

Wilson was not surprised. He says Grace showed leadership and drive from the moment she entered the nuclear engineering program in Madison. He believes she now has the opportunity and ability to promote change the way few others can.

“As the first nuclear engineer to be part of the Miss America world, there is a clear dissonance when people encounter a Miss Wisconsin who is also studying such an intellectually challenging discipline. This dissonance is disarming in a way that allows Grace to gain their attention in a way that she may not if her Social Impact Initiative were on a more traditional topic. It also makes her message more memorable because they can attach it to this unexpected dichotomy,” he said.

And he offered a glimpse of her strength of character beyond her many talents. She is not only a great role model for girls in science, she is a champion of all women.

“Grace has shown great leadership in establishing a culture of inclusion in our academic community,” Wilson said. “She has identified and called out behaviors that undermine this culture and sought support to make changes in the community for the benefits of all.” 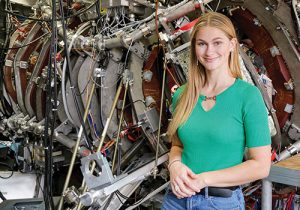 As Miss America, Grace plans to take the clean energy conversation to the next level, especially with the younger generation. “Right now, we’re seeing major turnover in the nuclear industry and a surge of people retiring, which is an opportunity for a whole new generation of nuclear engineers to come in. Realistically, it takes a really long time to build new nuclear plants, and if we really want to see that change in lowering emissions, we have to get started. Other countries are doing it, France is 80% nuclear, and America is capable. We need to put in the time and effort and change the political climate and misperceptions about nuclear. That is the one thing that is serving as a blockade and stopping us from excelling. We can set the standard for zero carbon energy production, not only for our country but for the globe.”

Miss America 2023 is also planning for a social media and public information campaign with the Department of Energy and intends to make the most of the opportunities before her, just as she has always done.

As for her dad, he now sees that there is indeed a future in nuclear, not just for his daughter, but for the nation and the world, if she has her way.

“He knows I have a career and more. He’s so excited!” Grace said.

And for the next year, that career comes with a crown.—Julie Lund