With the holiday season and all of its accompanying hustle and bustle just ahead, now might be a good time to take a nice, quiet walk through the woods and soak up some solitude. A great place to do that is along the Pine Line Rail Trail, where you can take in some history along with the peaceful scenery. 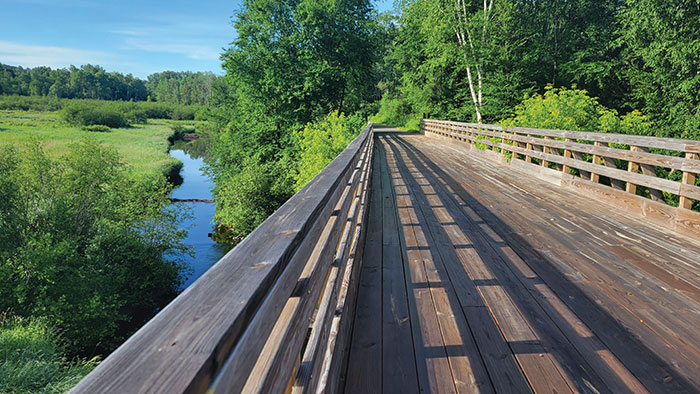 Several bridges along the trail provide places to stop and take in the scenery.

The trail follows a section of the route the Wisconsin Central Railroad took from 1876 to 1988, transporting loads of the eastern white pines that grow abundantly in this region to sawmills. The railroad was a major force in the forested wilderness of northern Wisconsin in the late 1800s, linking the timber-rich areas that were too far from rivers and streams for river logging to major cities like Chicago and St. Paul, where lumber was in great demand.

With the tall stands of pine trees lining the trail—particularly in the northern end—it’s easy to get lost in the past and imagine what the area was like during the lumber-boom era. The small, former whistle-stop communities connected to the trail add to its historical feel. For example, the City of Medford, where the southern trailhead is located, was created by the Wisconsin Central Railroad and a local lumber milling company. The train depot still stands in its original spot, fully renovated and now housing Main Street businesses. 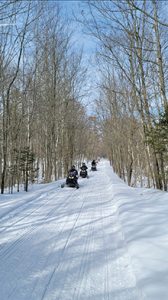 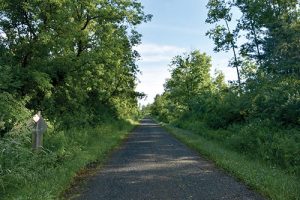 (Left) From December 1 through March 31, the Pine Line trail is open for snowmobiles and ATVs, provided the trails are declared officially open for snowmobiling. The trail is not open for non-motorized use during these times. Snowmobilers can also access 500 miles of Price County and 300 miles of Taylor County snowmobile trails in the area. Photo courtesy of Price County Forestry Department.  (Right) The southern portion of the Pine Line trail, located in Taylor County, has a well-groomed, crushed-granite surface.

Farther north the trail passes through the Village of Ogema in Price County, past a cluster of restored historical buildings including the original train station, which now serves as a rest stop, and the little red Larkin Schoolhouse built in 1883. Other quaint older buildings near the trail include the public library and the refurbished 1876 Ogema House Hotel.

However, the trail’s railway origins bring more than just historical significance to the Pine Line. Like other rail trails, the Pine Line offers comfortable, safe hiking/biking thanks to a mostly level surface, separate from busy roadways. Trains needed a gentle grade to run efficiently, so train tracks bypassed the hills and valleys of the surrounding terrain, leaving an ideal path for biking or hiking after the lines were abandoned by the railroad companies.

The trend of converting these abandoned rail corridors into public trails began in the 1960s, as railroad companies were closing lines at an increasingly rapid pace, according to Rails to Trails Conservancy in Washington, D.C.

At first, according to Rails to Trails, it was an informal transformation, with people instinctively walking along the old corridors where trains once traveled, exploring the bridges and tunnels and enjoying the scenery at an up-close, slower pace than a train ride allowed. Wisconsin is credited with establishing the first official rail trail when the Elroy-Sparta State Trail opened in 1965.

In 1980, Congress passed the Staggers Rail Act, which largely deregulated the nation’s railroad industry and allowed discontinuation of unprofitable routes. This led to the abandonment of thousands of miles of railroad line throughout the early 1980s. Becoming concerned about the potential permanent loss of rail corridor, Congress amended the National Trails System Act in 1983 to allow for preserving inactive corridors for future rail use while providing for interim trail use, leading to a surge in rail-to-trail conversion.

Today, Wisconsin continues to be a leader in developing bike and foot trails along these former railway corridors. According to the latest Rails to Trails statistics, Wisconsin ranks fourth in the nation for having the most rail trails at 109, with a total of 1,920 miles.

The Pine Line was added to Wisconsin’s rail trail system when it was discontinued for use as a rail line in 1988 and Price and Taylor counties acquired it for use as a trail. The trail is covered with crushed limestone and granite in the southern end and crushed gravel in the northern end. It’s still a work in progress, with surface improvements planned in the Price County portion as well as plans to eventually extend the trail farther into Prentice.

The trail’s namesake is still very much a dominant feature along the trail, but pine trees are not all there is to see. The southern end of the trail just outside of Medford passes by pastoral Wisconsin dairy farms, with red barns and black and white Holsteins dotting the landscape.

As the trail moves along north, past former railroad stop communities of Whittlesey, Chelsea, and Westboro, farms give way to hardwood forests and wetlands of the Black River Basin.

Crossing into Price County, the trail climbs gently over a glacial moraine near Ogema. This is an ideal spot to take a break at the restored train depot and get a bite to eat at Rail Trail Café before continuing on past more towering trees, cedar bogs, and swamps, toward Prentice, were the trail ends just outside the village.

The Pine Line crosses several streams and rivers, with bridges providing a place to stop and take in the wooded landscape and wetlands. Wildlife is abundant throughout.

On Top of Timm’s Hill 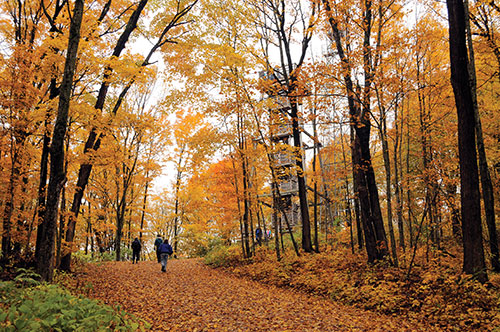 The Pine Line Rail Trail is within striking distance of another Wisconsin must-see—Timm’s Hill County Park in Ogema. At 1,951 feet above sea level, Timm’s Hill is the highest point in Wisconsin, with an observation deck at the very top reaching even higher. The bird’s-eye view from the top of this tower is breathtaking in all seasons, but particularly in the fall when the leaves change color.

The park also offers a variety of amenities including a boat landing and fishing pier, a swimming beach, a shelter with electricity, play equipment, picnic tables and grills.

Access to the park at this time of year is limited to non-motorized traffic, with vehicle access from May through October. However, multiple trails cross and intersect around the area, with Timm’s Hill National Trail connecting with the Timm’s Hill Observation Tower Trail, which leads straight up to the observation tower.

The Pine Line can be enjoyed on foot or on bike, with snowmobile and all-terrain-vehicles allowed from December 1 to March 31 provided the trails are declared officially open for snowmobiling. From May 15 to November 15, horseback riders may use the four feet of grassy area to the right of the trail, off the gravel. Hunting is prohibited along the trail at all times.

On the fourth Saturday of April each year, the trail’s 26.2 miles—coincidentally the exact distance of a marathon—are put to use for the annual Pine Line Marathon Run/Walk, although the course for 2023 calls for turning around mid-way through the trail so the race begins and ends at the same location at Medford City Park, by the Pine Line’s southern trailhead.

At this time of year, however, the Pine Line Rail Trail will bring peace and quiet, not to mention an appreciation for the area’s lumber-rich past.—Mary Erickson

Parking for the trail is available at the southern trailhead on S. Allmen Street in Medford and the northern trailhead in Prentice on Morner Road. The trail can also be accessed on municipal streets in Ogema, Westboro, Chelsea, and Whittlesey. For more information, contact Taylor County Tourism, www.taylorcountytourism.com or 715-748-4729, or the Price County Forestry and Parks Department, www.pricecountywi.net or 715-339-6371.