If you’re an American of a certain age, you probably don’t think of Labor Day without also thinking of the Jerry Lewis MDA Labor Day Telethon. For 44 years, millions of people would gather around the television for some of the 20-plus-hour event and watch Lewis convince viewers to pledge donations for the Muscular Dystrophy Association (MDA). 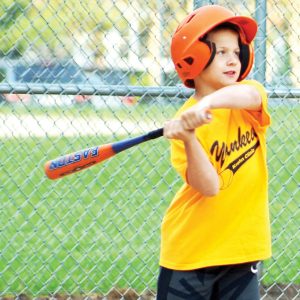 The Jerry Lewis MDA Labor Day Telethon ended in 2010, but its legacy lives on in Millston, where an annual Labor Day softball tournament that was inspired by the call to help “Jerry’s kids” is rivaling the iconic telethon in longevity. Now in its 38th year, the Millston MDA Labor Day Softball Tournament is the “oldest small-community fundraiser for MDA in the nation,” according to Sue Marcou, tournament organizer and a member of Jackson Electric Cooperative.

“That’s what the MDA has told us,” she said. “It’s my favorite weekend of the year. I just love this tournament. I don’t even know if I can express my feelings about this tournament—just the feelings of gratitude for the generosity of everyone involved.”

While softball is the weekend’s main draw, this is much more than just a softball tournament. Over the years, the event has been expanded to include other activities like a bean bag tournament, a volleyball tournament, a .1K walk (yes, you read that right—.1K), a pancake breakfast, and an auction.

It’s also become a reunion of sorts, as some teams have been participating for many years and now have second- and even third-generation family members on the rosters. There are new faces each year as well, as folks who are camping in Jackson County for the holiday weekend sometimes stop by just to see what’s going on and end up becoming regulars too. 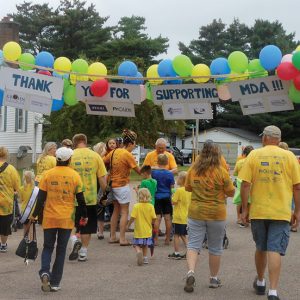 Everyone, it seems, gets caught up in the spirit of the weekend and contributes to the cause, whether by participating in the auction, buying a T-shirt or raffle tickets, or simply throwing a few bucks (or more) in the big fishbowl. Money from concession sales helps support the park, but all donations go to MDA, specifically to MDA summer camp.

“No one makes any money here,” Marcou pointed out. “The only people who are paid here are the umpires, but everyone else is a volunteer and most of the money—entrance fees, everything—goes to MDA.”

Over the past five years the tournament has raised an average of just over $12,000 in donations, she said, with the highest year totaling more than $17,000. 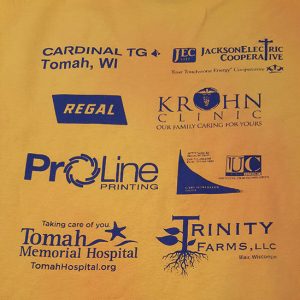 The Millston MDA Labor Day Softball Tournament is now a major event on the community’s calendar, but it rose from humble beginnings. The first event was just a softball game between two local teams, played with the intention of raising some money for “Jerry’s kids.”

That first game was arranged by Larry “Fuzz” Randals. Inspired by the Jerry Lewis telethon, Randals set up a softball game for Labor Day weekend to raise some money for MDA.

While Randals was busy making arrangements, his high school classmate and occasional softball teammate/opponent Scott Peterson was itching to play and heard there’d be some kind of Labor Day tournament in Millston. Peterson, who retired a few years ago as work order clerk at Jackson Electric Cooperative after a 28-year career there, “went down on a whim to see if there was someplace to play and they [Randals’ team] ended up needing someone on their team.”

That first game was played on a field that Randals mistakenly thought was public, but its private ownership turned out to be the least of its challenges. The field, he and Peterson said, hadn’t been mowed, there was no fence, and outfielders had to sidestep the rabbits that kept popping out of holes and avoid the deep dip in left field where water would pool.

However, the game was played in high spirits, and between the raffles and the hot dog sales the modest event managed to raise $500, all of which was donated to MDA, Randals said.

They were off; the tournament just kept building from there.

At the same time, the local softball team set to work raising money for the Town of Millston to purchase the field and make improvements to it. With volunteer labor and money raised from yearly tournaments and other fundraisers, backstops, bleachers, fencing, ticket booths, and a scoreboard were gradually added. Randals said at one point some area cranberry growers brought their bog equipment and leveled off the field, eliminating the left-field dip for good. 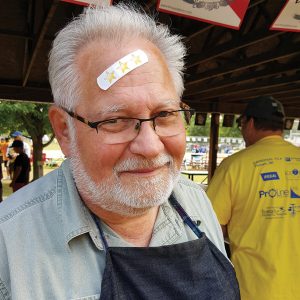 Dan Smrekar, Jackson Electric Cooperative board member and Millston’s town chair, sells the tickets and performs other duties, including distributing band-aids after the .1K walk.

The result is a quality field surrounded by colorful landscaping, paths, benches, a fountain, and other park-like features. It’s a source of pride for the Millston community, especially because it was built with donations and volunteer sweat equity. Dan Smrekar, a longtime member of Jackson Electric Cooperative’s board of directors, also serves as the Millston town chair. He pointed out that the town itself has limited funds due to its unique tax base that includes a big chunk of the Black River State Forest.

“Yet we have this beautiful ballpark,” he said. “It’s the people who have given money for this. I am just surrounded by all kinds of good people.”

As town chair, Smrekar has a number of duties on tournament weekend, but his primarily role is—as Marcou describes him—“master ticket seller.” For years Smrekar has been working the tournament crowd, selling scratch-off tickets for various donated prizes.

Randals and Peterson are still mainstays of the tournament as well. Randals no longer plays softball but he’s usually on hand for at least some of it. Peterson too mostly coaches now, but he hasn’t missed a tournament since the very first one.

The Heart of the Weekend

In the early years, proceeds from the weekend were given to MDA to be used at the organization’s discretion. Starting in 2011, tournament organizers began requesting that all donations from the weekend be channeled specifically to the MDA summer camps, a move that fits with the organizers’ approach to the fundraiser. 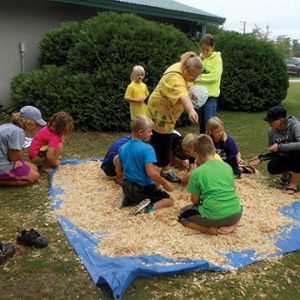 “When you think of muscular dystrophy, you initially think of muscles like arms and legs, but every part of your body is a muscle, including the heart and the lungs,” Marcou explained. “So one of the things we emphasize is to use that heart that we get. We play for this weekend so the kids can play for a week at camp.”

Participation by area children affected by MDA gives great meaning to the tournament. Currently serving as a mini spokesperson is Samuel Sedelbauer, age 9, who is diagnosed with a form of MDA. Marcou said Sedelbauer has participated in the tournament for the past four years, and his parents provide an update on MDA research progress each year.

The “use the heart” theme extends to accompanying activities as well. The weekend’s .1K walk was designed as such because, as Marcou pointed out, “anyone can do it.” Participants get T-shirts provided by local sponsors including Jackson Electric Cooperative, and Marcou said spectators cheer on the walkers with great enthusiasm. 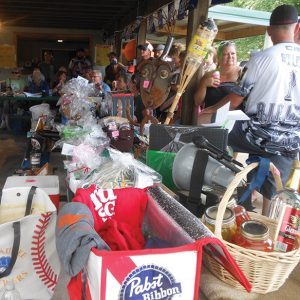 Big hearts are also on display at the auction. Marcou said part of the tournament entry fee is an item for the auction, and teams have given everything from homemade iron fire rings to tickets to sporting events. Spectators and teams alike bid generously, she said.

There’s plenty of heart among the teams as well, despite the competition on the field. Many teams are from the local area, but some travel considerably to participate each year. One team has traveled from Cedar Rapids, Iowa, for about 20 years. This team came close to missing the tournament a few years ago, due to devastating flooding in Cedar Rapids.

Disappointed, the team captain called Peterson to say they couldn’t pull together enough players to participate. “I said, ‘Tell you what. You bring your six, and I’ll make sure you have a team,’ ” Peterson responded.

The Cedar Rapids team ended up coming after all and playing with a mix of Iowa players and volunteers from the Millston area. Filling out a team—and the tournament—is never a problem, it seems.

“Teams are coming from all over, and there’s no money to win,” Randals marveled. “All you get is a trophy, and sometimes they even donate the trophy back.”

While the generosity of all involved no longer surprises him, Randals is still amazed at what the simple softball game he organized 38 years ago has grown into.

“I never thought this tournament would end up being what it is now,” he said. “I never would have imagined it.”—Mary Erickson