When their long-serving elementary school closed, this community transformed the property into a park.

It’s never been very difficult to identify the center of a rural community. Especially in the early days of Wisconsin’s statehood, the core of the settlements that were popping up could mostly be found without the use of a compass, map, or tool of any kind. All one really had to do to was look up for a cupola, listen for the bell that would ring inside it, and follow along to the local school. 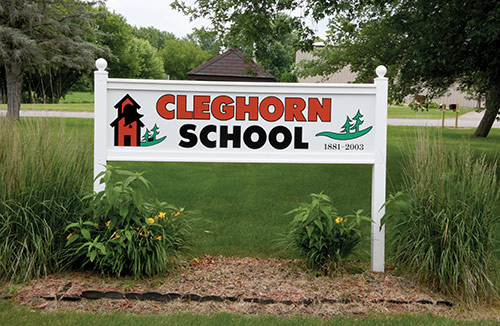 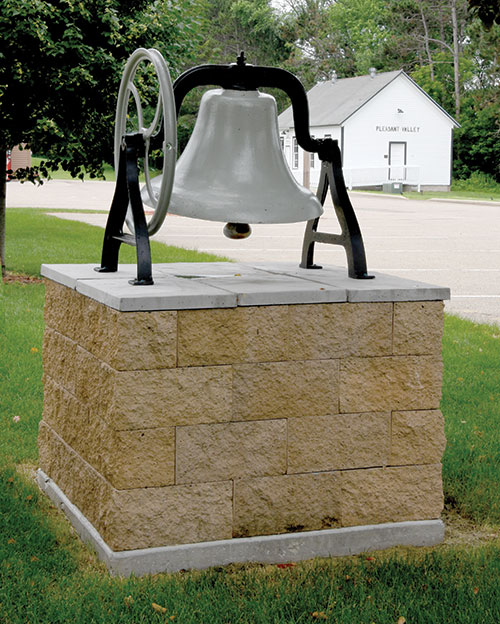 The original school bell is kept on display at Cleghorn School Park in Pleasant Valley, where the former Cleghorn Elementary School once stood. Behind it is the town’s historic town hall, which was moved to the park and is now a museum.

These little rural schools—typically just one room and presided over by a single teacher—played a much more significant role than simply providing a place where children learned the three Rs. Rural schools were often the heart of their communities, serving as social hubs where families would gather for picnics, performances, town meetings, and other occasions. The schools themselves may have changed with time and progress, but their importance in keeping the community connected stayed the same.

Such was the case with the Cleghorn Elementary School, which served the community of Cleghorn within the Township of Pleasant Valley for more than 100 years. Begun in 1881, the original structure was replaced with a “modern” brick building in the 1950s, serving children from kindergarten through grade 5.

Although it was beloved in the community, the Cleghorn school eventually succumbed to the challenges faced by all small rural schools, and the Eau Claire School District closed the building in 2003.

“That was a critical time for us here in our little Cleghorn community because the school was a big part of us,” said Dan Hanson, Town of Pleasant Valley board chair. “The school closing—we were all very disappointed in that. We had two or three generations in this community that went there.”

“We turned something really bad and really negative into something super special,” Hanson said. “We’ve got a spectacular park here that came from something that we were all so sad and disappointed about. It took us a long time to get here, but what we have now is really special.” 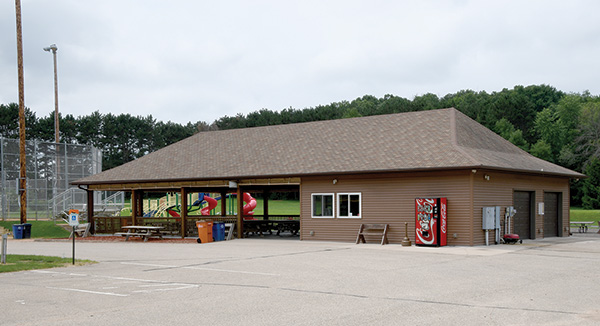 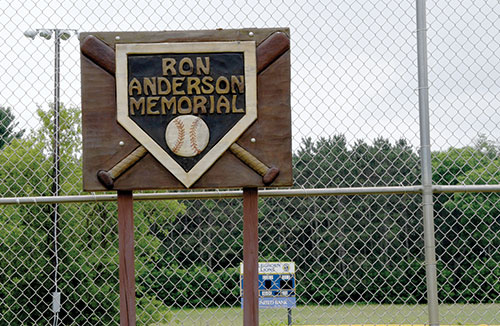 Left: The park’s pavilion includes public restrooms and a state-approved serving kitchen, stocked with stainless steel equipment, large coffee roasters, and large coffee pots donated by individuals or purchased with money raised by members of the community. Right: The ball field, designed to accommodate both adult softball leagues and youth baseball, was built largely with funds donated by the family of former Lions Club member Ron Anderson as a memorial gift.

The transformation of Cleghorn Elementary School to Cleghorn School Park was nurtured by virtually every aspect of the community including service organizations, local businesses, and individuals, all of whom donated time, talent, and funds to the ongoing project.

The effort began when the town took up the school district’s offer to purchase the school property, which included the old school building, some playground equipment, a nature trail, and a private well and septic system.

The transaction was for only $1, but that didn’t exactly mean it was a bargain. The agreement came with the understanding that the town would cover the costs of demolition and any necessary upgrades to the property’s infrastructure. A park committee was formed to oversee the property’s development.

Thankfully, the well and septic system were found to be fine, but testing of a 1950s building unsurprisingly turned up asbestos, which had to be removed before the building could be razed. Even this unfortunate discovery, however, led to something special.

The town received a substantial grant from the Wisconsin Department of Natural Resources and another from the State of Wisconsin to help with the cost of removing the old school building. The community also held the first of many fund-raising events in the fall of 2004 inside the empty building. That modest gathering has morphed into Cleghorn’s annual three-day Harvest Fest held in September, an event that has grown in popularity to the point of needing space even beyond the park’s borders.

After the old school building was safely removed, the committee focused on adding a pavilion equipped with a kitchen. Once again, community support made light of a large, expensive project; the Chippewa Valley Homebuilders Association built the pavilion, complete with public restrooms and a state-approved kitchen, in 2006 as a community-service project.

Next, the committee focused on creating a new, professional-level ball field at the site where the school’s little playground ball field had been. This project, completed in 2008, involved filling and grading the field, installing an irrigation system, seeding grass, putting in new bleachers and dugouts, adding an electronic scoreboard and a professional PA system, and installing lights. The latter was done with the help of Eau Claire Energy Cooperative (ECEC).

“We put the co-op’s equipment to the test on that project because they’re 80-foot poles, and the co-op crews volunteered their time to come out and brought the trucks,” Hanson said. “We would never have gotten those lights up without Eau Claire Energy.” 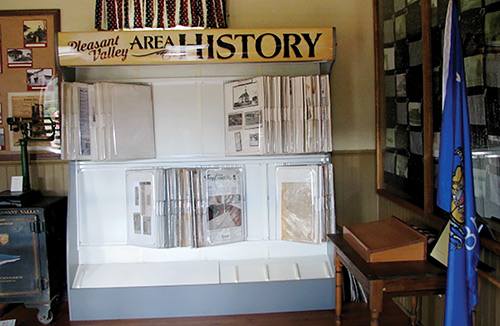 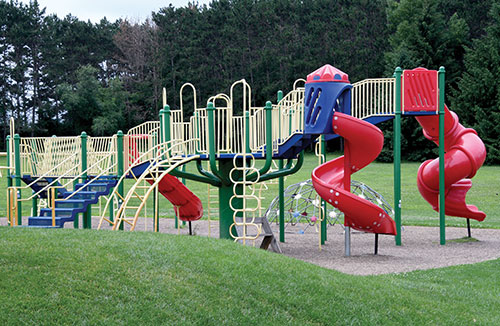 Installing lights at the ballfield is not the only way the co-op has helped the Cleghorn School Park shine. ECEC serves electricity to the park and has been involved in its development every step of the way.

“The Eau Claire Energy Co-op has been a great friend to our park and the Town of Pleasant Valley over the years,” Hanson said. “We can’t thank them enough for what a friend they are.”

In addition, ECEC Director Frank Neibauer is current chair of the Town of Pleasant Valley Park Committee. He’s also a member of the Cleghorn Lions Club, which was formed about the time the park project began and has played a major role in the park’s development ever since.

Among other contributions, the Cleghorn Lions Club purchased the lights that ECEC crews installed at the park’s new ball field. To help control the cost of the electricity to power the park, Neibauer helped arrange for the Lions Club to purchase subscriptions for ECEC’s MemberSolar community solar installation and donate them to Pleasant Valley Township. With the purchase of those subscriptions, the Lions Club has locked in electric rates for the town through 2035.

“Over the years, Eau Claire Energy has helped us in many ways,” Neibauer said, “but it took lot of community support to get this whole project to work.”

Among the more unique donations was Cleghorn’s old town hall building, given to the park by the owners of the property on which the town hall was located. The town had to take care of moving the building, and ECEC stepped in to help again by raising power lines along the route so the building could pass safely through. The historic building now houses a museum showcasing the history of the Cleghorn community. 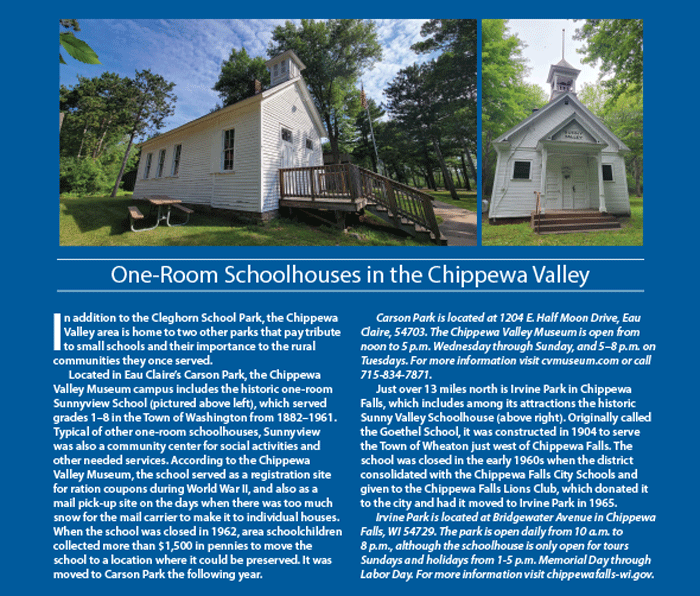 In addition to partnering in the park’s development, ECEC is also a major sponsor of the town’s annual fall festival, which has gotten bigger and better over the years, even as the park’s dependence on the event as a fundraiser has all but disappeared. 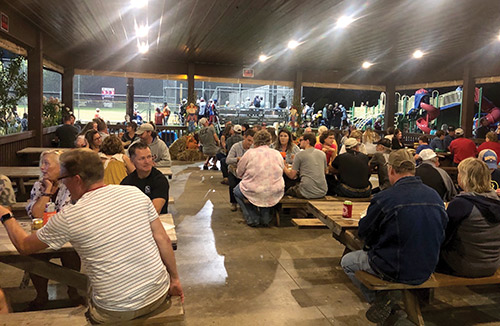 The Cleghorn School Park hosts many community gatherings, the biggest of which is the three-day Harvest Fest in September. This annual celebration makes use of every inch of the park, with car shows, ball games, food, live music, and other activities. 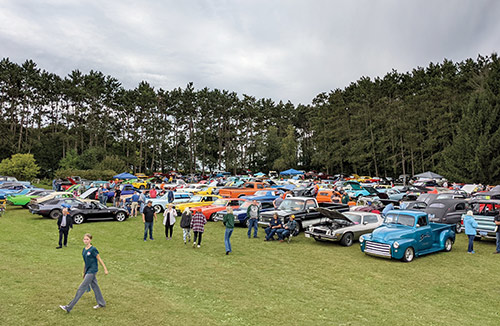 “The park supports itself now with money generating from the pavilion rental and kitchen rental,” Hanson said, noting that the pavilion is typically booked solid every weekend from the middle of May to the end of September for tournaments, reunions, parties, and other gatherings.

Money from fundraisers as well as memorial donations continue to be used to enhance the park; future plans call for additional landscaping and trees, adding a fan deck and dugout covers at the ball field, and building a Veterans Memorial. However, the Cleghorn Harvest Fest now serves first and foremost as a celebration of all the good that’s come of a sad situation thanks to a community that pulled together to keep its school spirit alive.

And in the center of all the activity stands the old Cleghorn school bell, still bringing the community together.—Mary Erickson

The Cleghorn School Park is located at 10434 County Road I, Eleva, WI 54738. It’s open to the public year-round, typically 6 a.m. to 11 p.m. To learn more about the park, visit pleasantvalleywi.gov. or call 715-878-4645. For more information about the Cleghorn Harvest Fest, visit www.cleghornharvestfest.com