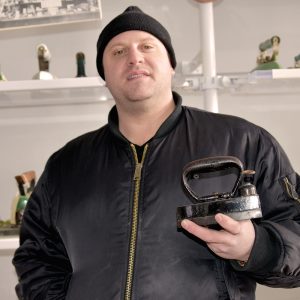 An electric iron made by Carpenter in St. Paul in the 1890s, the first model of electric irons to be commercially produced

Stefan Osdene is a fan of electric appliances. A big fan.

Owner of Cambridge Gold and Antiques, Osdene deals in all sorts of vintage items, but the electric appliances are what sparked his interest. The walls of his store are lined with every kind of electric appliance imaginable, and the entire upstairs is a mini-museum filled with the most unique and special items from his vast personal collection, acquired over three decades. You’ll see everything here from old electric hair dryers and irons to malt makers and motors. And fans. Lots and lots of fans.

“As a young kid, I was very much afraid of fans,” Osdene said. “I was afraid that I was going to get sucked into a fan and chopped up, especially after seeing ‘Willie Wonka and the Chocolate Factory’.” 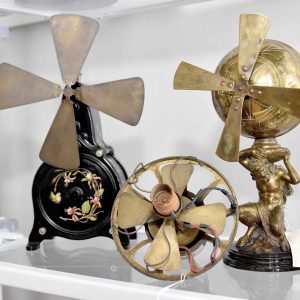 That fear, he said, turned into an obsession that led him to seek out ventilating fans in the local businesses he’d visit. It was during a family vacation to Florida, when Osdene was about 7, when his fear of fans turned into appreciation for them. The family visited the Edison Museum in Fort Myers on that trip, and Osdene began to see fans in a whole new light.

“I saw a brass-plated fan in every room,” he said. “I was hooked. I was just smitten with brass fans. There’s something very beautiful about a piece of machinery that’s 120 years old and still has aesthetic beauty and function.”

Osdene bought his first fan at a thrift store when he was 8 years old. Shortly after he bought his first of what would be many brass-plated fans, an Emerson, which Osdene believes made the finest electric fans ever.
Over time, Osdene picked up more and more fans, becoming a bona-fide collector like his father, an avid stamp collector with a special focus on stamps from all reaches of the British Empire. 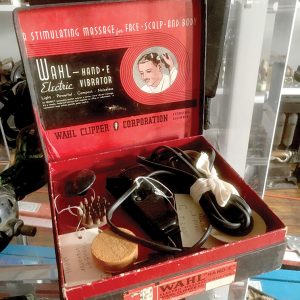 “He encouraged me to collect,” Osdene said. “The fans were the first things, but then I picked up some electric toasters, and I got into electrical history. Over time I started to collect any and every kind of electrical appliance. Anything with a cord on it—the stuff that effectively tells the story of electrification.”

Osdene’s father grew to share his son’s interest and began collecting old appliances himself. Between the two, they amassed an impressive collection, all of which came under the younger Osdene’s watch when his father passed away in 2011. 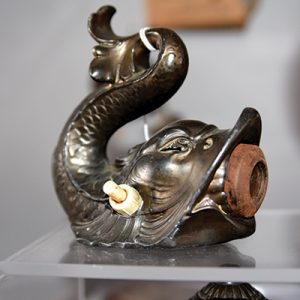 Given the Dairy State’s rather prominent role in the history of electrification (Osdene noted that the second electrical power station in the United States—after Edison’s Pearl Street Station—opened in Appleton in 1882), it seems only natural that he found a permanent home for his collection here. Osdene came from his native Virginia to Wisconsin in 2006 to study art history at UW–Madison, attending graduate school on a full scholarship and earning a doctorate in art history in 2014.

While attending graduate school, Osdene visited antique stores and operated an antique business from his home. The antique stores he explored yielded lots of great finds, due in part, Osdene said, to the state’s strong history of manufacturing and industrial production, as well as Wisconsin being a birthplace of several iconic small appliance brands.

Racine is home to Hamilton Beach and Oster Manufacturing Company, founded in 1910 and 1924, respectively. And Racine, he noted, is only about an hour from Chicago, home to Sunbeam, “probably the single most famous maker of mixers and small appliances.” 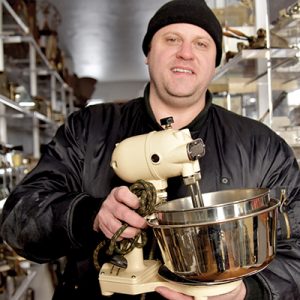 Stefan Osdene collects all kinds of small electric appliances, but electric fans are still his favorite. Inset: Osdene holds a 1931 mixmaster stand mixer, made by Sunbeam.

“I would see stuff that just blew my mind,” Osdene said. “It knocked my socks off. I found so much early wonderful stuff that you don’t see anywhere else. ”

Eventually, it made sense for Osdene to find a building that could serve as a home base for his business and personal collection. He settled his business in Cambridge because the village is safe, located close to Madison, and had a building available on Main Street that’s a perfect fit—a 1902 red brick building with a rich history of its own.

Osdene moved several truckloads of his electric appliance collection and other items to his “new” building and opened the storefront in January 2017. The upstairs museum display is open to visitors, although still a work in progress. 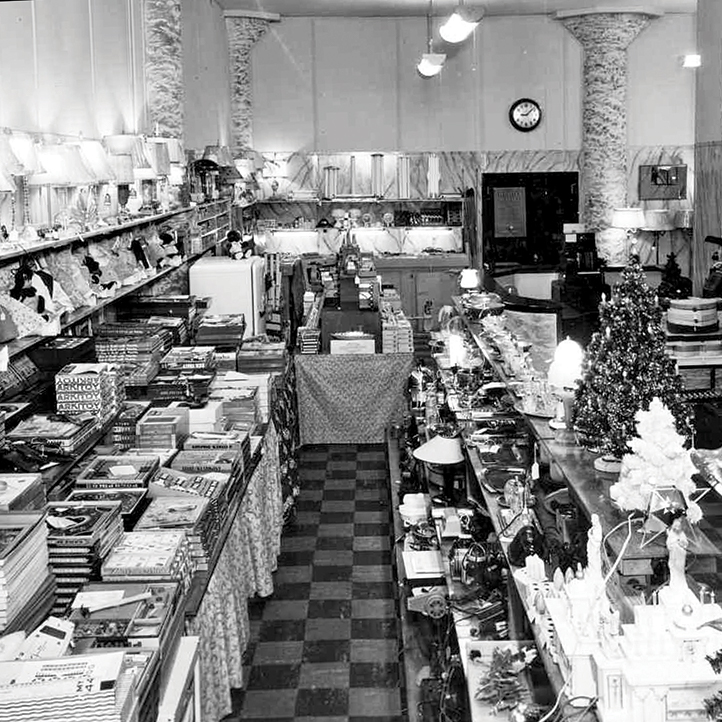 The upstairs display room of Stefan Osdene’s Cambridge Gold and Antiques brings to mind the downstairs retail store once operated by the Wisconsin Electric Cooperative (WEC), the statewide association serving Wisconsin’s electric co-ops, known today as the Wisconsin Electric Cooperative Association. The retail store, offering all the latest electric appliances, opened in 1942 on the ground floor of WEC’s headquarters at the time, on East Wilson Street in Madison. Thanks to an extensive purchasing network WEC had established before wartime restrictions were placed on the manufacture of consumer goods, the WEC store carried some items that were hard to find at the time, making it a popular stop for Madison shoppers. Ultimately, cooperative managers determined the store was not in the spirit of the WEC bylaw stating that “all operations of the cooperative shall be on a cooperative basis, not for profit, and for the primary use and benefit of its members.” It was closed in 1944. 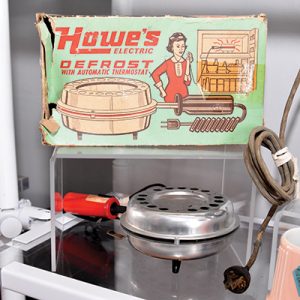 Before automatic-defrost refrigerators were available, items such as this Howe’s electric defroster helped keep fridges and freezers clear of ice buildup.

Osdene sells and buys antiques and offers free appraisals. He does most of his business online or over the phone, so the storefront is open by appointment only.

He also welcomes visitors who simply share his interest in and appreciation of antique small appliances and would like to wander through the upstairs display, studying the individual items. He can help fellow collectors track down individual items they might be seeking, or direct collectors to resources for any other needs, such as restoration work.

Not that much restoral is often needed, given how sturdy most of these appliances are. Osdene pointed out that most of the items in his collection still work. Most use direct current instead of alternating current so they may not work easily, he said, but with the right adaptations, they will work.

“What I find really intriguing about these items is the fact that they can still be functional so many years later,” Osdene said. “They have an heirloom quality in terms of manufacturing expertise, the engineering. They’re built to last. You can’t say that about a lot of products today.” 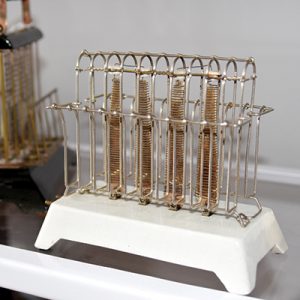 A General Electric porcelain-based toaster made in about 1909, the first model of electric toasters to be commercially produced;

In addition to their functionality, the early small appliances were created with embellishments that complemented the design trends of the day, another quality Osdene finds appealing.

If you would like to see for yourself, give Stefan a call at Cambridge Gold and Antiques and arrange for a visit. You might just become a fan yourself.—Mary Erickson