On occasion, the stories we feature truly strike a chord and sometimes even connect with the past. 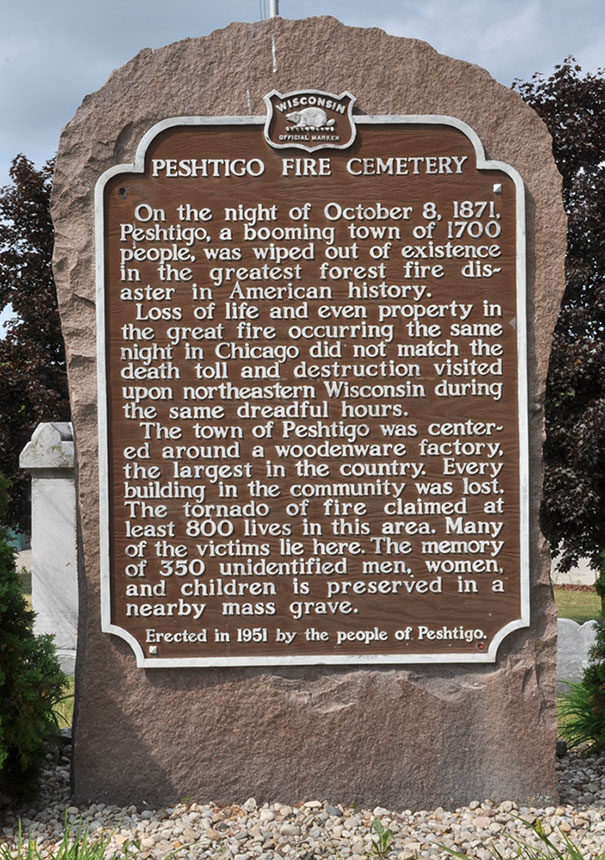 Wisconsin’s very first historical marker is the one erected at the Peshtigo Fire Cemetery.

A reader from Vernon Electric recognized two of the survivors of the Peshtigo Fire from the 1951 photo on page 25 of our September magazine. You may recall that our Wisconsin Favorites feature last month—“150 Years: Peshtigo marks the sesquicentennial of America’s deadliest wildfire”—shared accounts of the disaster and featured a photo of the survivors standing near the historical marker at its 1951 dedication ceremony.

The Vernon reader—Tom Race—grew up in Peshtigo. When he came across the 1951 photo with the survivors, he recognized his Great Grandmother Nellie standing next to the tall man he thought at first was his Great Grandfather Lorenzo. Upon further investigation into his family’s history Tom learned that the man standing at Nellie’s side is actually her brother, Charles Wright, as  Lorenzo had died earlier in 1951.

Tom shared his great-grandfather’s survival story with us, which is pretty harrowing. He told us when the fire struck, Lorenzo’s father, an itinerant preacher, told the family there was no use in running because this was the end of the world, as described in the Book of Revelations. He took two of his children (his wife, a midwife, had gone to a neighboring farm earlier that day to attend to a birth and never made it home) into the cellar, but Lorenzo and his brother Harley instead grabbed their bed linens, soaked them in water from the well, and ran through the firestorm to the nearest creek bed. They dug themselves down in the mud of the creekbed and pulled the wet linens over their bodies, and the fire passed right over them. They were the only members of their immediate family to survive. Tom said Lorenzo was badly burned by the fire
on the right side of his face and arm, probably from covering up his younger brother in the creek bed, and all his grown life he kept a long beard to cover up the scars on his face.

Lorenzo and Harley owed their lives, Tom said, to the “mercy of God and the insight of Lorenzo Race.” Lorenzo died in 1951, not long before the photo by the historical marker was taken. Nellie died in 1957.

We thank Tom and his family for sharing the story with us as we continue to remember the lives lost 150 years ago this month. —Dana Kelroy