Powering a home using the sun’s energy is not a new concept by any means. But recent technological advances and lower costs are helping to make solar a more attractive option. This promising source of renewable energy is also becoming increasingly accessible, with many electric cooperatives offering community solar programs as an alternative to purchasing a rooftop solar array. Community solar helps spread the costs and relieves the homeowner of the burden of maintaining and operating the system.

A question pondered by many—who may or may not be considering the investment in a solar generating system—is how solar panels actually produce electricity. Here, we’ll break down this seemingly abstract concept for a closer look at the conversion of sunlight into usable power.

The solar panels you see on road signs or rooftops consist of smaller, connected photovoltaic or “PV” cells, “photo” meaning light and “voltaic” meaning capable of producing direct-current electricity. These cells consist of two layers of a semi-conducting material, typically silicon, which are the meat of the solar panels. The cells are infused with additional elements giving the top layer a negative charge and the bottom layer a positive charge. The two silicon layers are also sandwiched between several other coatings, including a glass casing, to optimize the PV cells’ energy production and provide protection from outside debris. 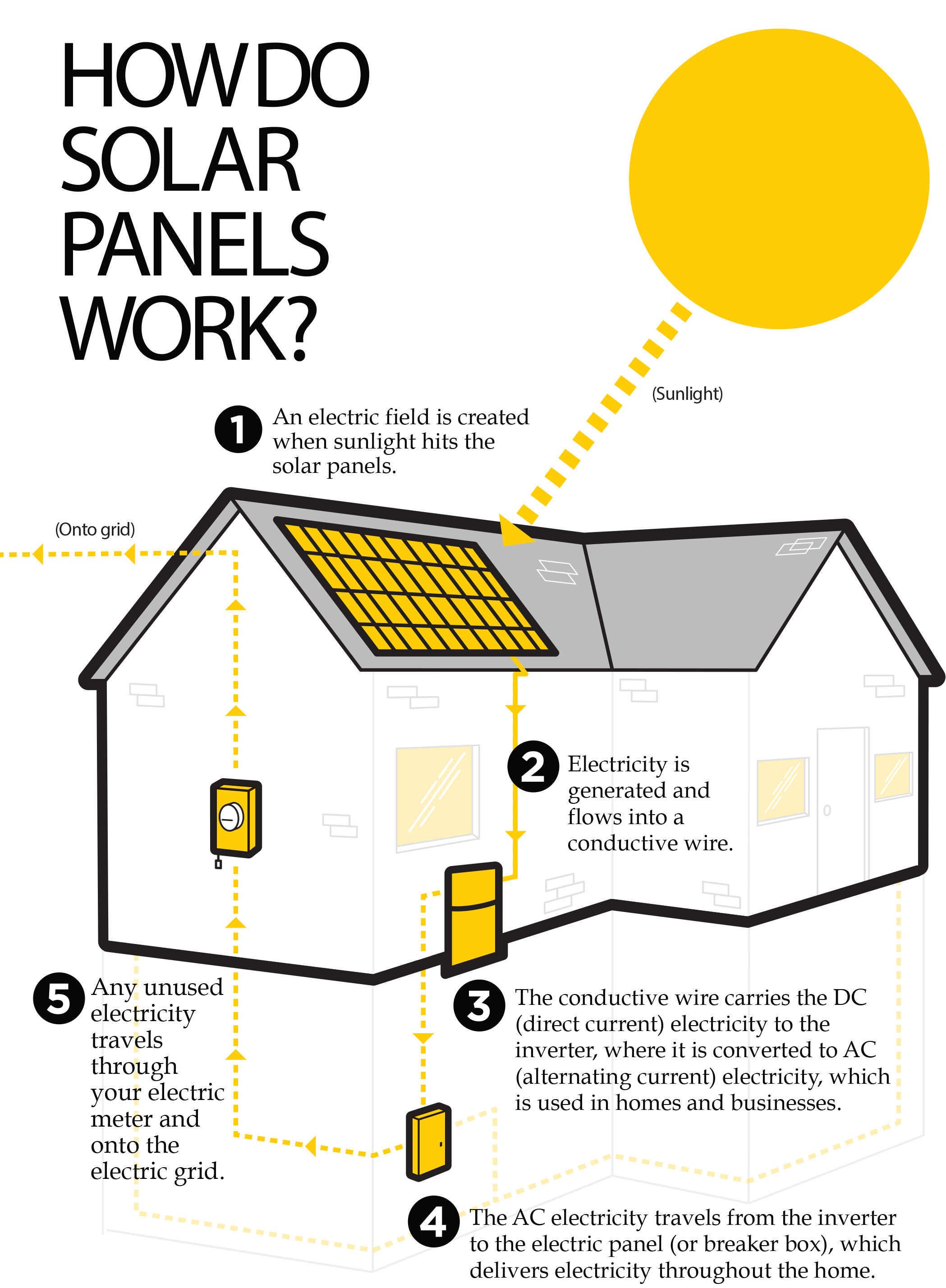 Keeping in mind the construction of these panels, let’s explore the electrical process they facilitate. The sun emits massive amounts of solar energy each day in the form of photons, very small particles of electromagnetic energy in the form of light. When photons collide hard enough with PV cells, electrons are dislodged from atoms in the top silicon layer of the cells, leaving gaps to be filled by electrons from the bottom layer. Because of the electric field created by the two silicon layers, the loose electrons will circulate through the cells in a single direction, out towards the metal sides of the solar panel, creating electricity with a direct current (DC).

This is where the system component called a power inverter comes in. The newly generated electricity flows out of the panels, through conductive wire and into the inverter system. This system is needed because the majority of our home appliances and electronics operate on alternating current, or AC power. The inverter converts the power from DC to AC. Once the electricity is in an alternating current, it flows from the inverter to our breaker box and into our homes as needed for charging our phones, watching TV, or running appliances. Any solar energy that goes unused will flow through the electric meter and onto the grid.

Solar has been booming, especially among utilities. And electric cooperatives have been leading the utility industry in developing the resource through a deployment strategy called “community solar.” This business model of shared solar generation allows co-ops to develop an array for members who can either purchase the power or lease panels. A community program makes solar energy accessible for co-op members who find rooftop panels impractical because of expense, tree shading, directional orientation, renting rather than owning the residence, or other factors.

Rooftop Solar If the cost makes sense and you have a suitable roof, installing solar panels can be a great way to reduce your monthly energy bill. If that’s something you might consider, it’s a good idea to talk with your local electric cooperative before installing solar PV on your home.

Many co-ops nationwide have been working to gauge the level of member interest, and you might find your co-op offering a community solar program for a better price than a rooftop system and without the hassle of maintaining it yourself. Individual cooperatives may also have differing policies regarding member-owned generation, and they can also give you sound advice on maintaining a system of your own.