Ready or not, electric vehicles (EV) are coming. They’re already here, of course, but with prices dropping, charging networks expanding, and new, appealing models entering the market (see sidebar), their numbers are expected to grow significantly, and quickly. Just recently, top U.S. automakers announced intentions to have 40 to 50 percent of new vehicle sales be electric models by 2030.

Electric cooperatives are working hard to ensure they—and their members—are ready for this dramatic increase. This past year, Wisconsin electric co-ops launched CHARGE™, a network of co-op-branded, public-use level 2 and level 3 charging stations, with a virtual map of chargers so travelers can plan trips free of the “range anxiety” that currently plagues many would-be EV owners. CHARGE’s offerings also include co-op-branded in-home chargers with intelligence built in to allow for load control and time-of-use rates that will help members save money. 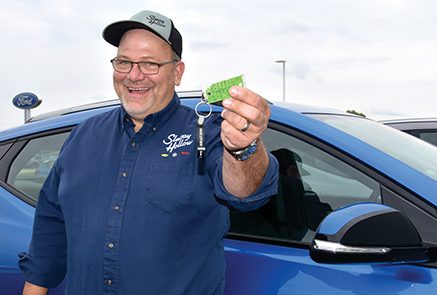 Sleepy Hollow owner Lavon Felton hands a key to an EV to anyone approaching his
dealership in search of a rental car. Among his EV customers are Vernon Electric
Cooperative General Manager/CEO Craig Buros and Jeff Springer, Dairyland Power Cooperative manager of innovation and efficient electrification, both of whom purchased their electric vehicles from Sleepy Hollow. In fact, Sleepy Hollow’s very first EV sale was to Springer. Both Vernon Electric and Dairyland Power, along with Richland Electric Cooperative, are also partnering with Sleepy Hollow in establishing a public charging station outfitted with co-op-branded fast chargers.

On the customer services end, co-ops are working just as hard to stay ahead of fast-moving EV trends. Member services personnel from co-ops around the state meet annually for a day of education and training to help them better serve their members. The bulk of this year’s programming was devoted to EVs, with an EV showcase where employees could test drive different vehicles and exchange ideas about incentives and programs.

Working together in this way is a key cooperative strength. But cooperatives also gain strength by reaching beyond co-op borders and working with other businesses and organizations for the betterment of their communities. The emergence of electric vehicles has opened up opportunities for partnerships that benefit co-ops, local businesses, and consumers alike. One such collaboration is occurring in southwest Wisconsin. 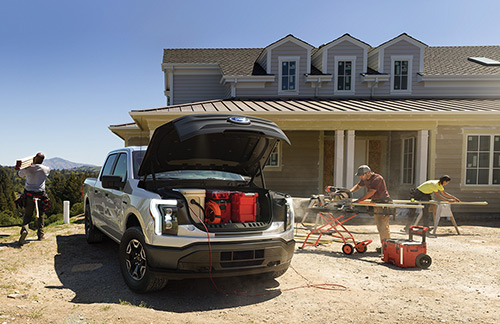 Electric Trucks and SUVs are Coming

The Ford F150 Lightning is changing minds across America about what an electric vehicle can do. In fact, Ford declared this is their best truck to date—not best electric vehicle, but best truck, period. It’s scheduled to arrive in spring 2022, starting under $40,000 for the commercial trim package (230-mile range model). A 300+ mile battery is an option, and all models are 4X4 with respectable towing and payload capacities. The Lightning is also equipped to provide 9.6kW of home backup power or portable power for a jobsite.

SUVs are also available now and pickups will be soon.

GMC has announced a late 2021 release of an electric Hummer with 1,000 horsepower and additional features for off-road performance.

Rivian, a startup backed by billions of dollars from Ford and Amazon, is planning to unveil their R1T electric pickup later this year.

Crossover SUVs (CUVs) are one of the most popular types of vehicles, and a number of manufacturers say they’ll have electric models available soon. Ford’s Mustang Mach-E is available now with a range up to 305 miles, starting at $45,000. Volkswagen’s ID4 CUV starts at $40,000.
Several factors are driving demand for more and more EVs:

Lavon “Spanky” Felton is owner of Sleepy Hollow Auto in Viroqua and a well-known presence in the community, with multiple ties to electric co-ops. He’s a member of Vernon Electric Cooperative himself, and the new Ford dealership he’s adding in Viroqua will be served by Vernon Electric as well.

Felton also shares electric co-ops’ approach to the growing EV market, choosing to stay ahead of the trend by preparing not only his customers, but also his sales and maintenance staff, for the expected surge of EV vehicles.

“I’m trying to be ‘boots on the ground’ with EVs,” he pointed out. “I’d rather be the guy that knows what to do right away than play catch up later.” 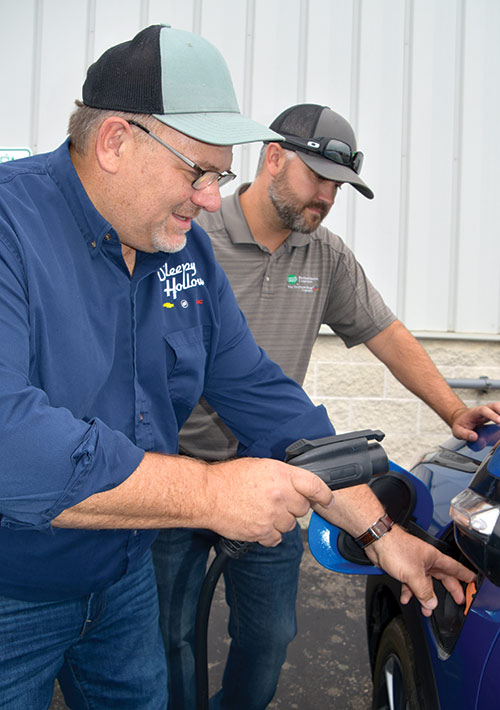 Felton, shown here with Trevor Clark, Richland Electric Cooperative’s director of outreach services and the president of the Member Services Association for 2020-2021, spoke to co-op member services employees at their recent annual gathering about how electric co-ops and car dealers can work together to facilitate a successful transition to EV use.

To that end, Felton’s been essentially creating his own blueprint for introducing and promoting EVs, centered around the goal of simply getting as many people as possible behind the wheel of an electric vehicle to give it a try.

Felton was discussing this idea with Shannon Clark, CEO/general manager of neighboring Richland Electric Cooperative, earlier this year when they got to talking about how electric co-ops and Sleepy Hollow could work together toward their shared goal of encouraging EV use and facilitating a smooth transition. Vernon Electric, in the meantime, was already successfully working with a local business in this venture, having installed a level 3 charger at Readstown Restaurant at the intersection of Highways 14, 61, and 131 in Kickapoo last spring.

Ultimately, talks led to a similar partnership among Sleepy Hollow, Richland Electric, Vernon Electric, and Dairyland Power Cooperative, through which Felton obtained two CHARGE-branded level 3 chargers that will be installed at the new Sleepy Hollow dealership and available for public use.

They will be located under a canopy in front of the building similar to how gas pumps are arranged in front of a convenience store. Not only will be travelers along Highway 14/27 be able to stop and quickly charge their EVs there, but potential EV customers at the dealership will be able to see for themselves how quickly these level 3 chargers work.

The partnership is mutually beneficial, as it brings together two different facets of the EV equation.

“They’re the electric vehicle sales experts,” said Craig Buros, general manager/CEO of Vernon Electric. “They’re out there selling EVs. The co-ops’ role is in the charging. We’re the experts in electricity sales, providing the network, rates, incentives, not only for in-home charging where 90 percent of the charging will take place, but also with the fast chargers—the public chargers that will help alleviate the range anxiety.” 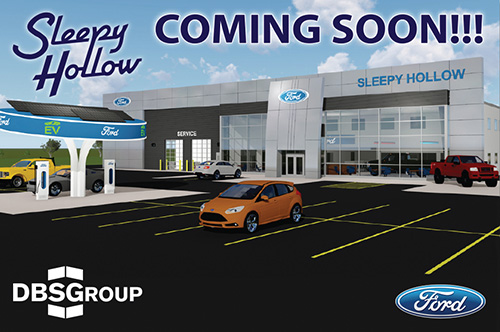 One Person at a Time

Felton, however, is not waiting for the new dealership to open to begin selling EVs. Working with the co-ops simply brought new possibilities to what he was already doing.

“Because we were able to form such a great partnership with the co-ops and with CHARGE, we went ahead and started switching out our rental fleet with EVs,” he said. “Now we have 12 of them in our fleet. And they’re running every day.”

Whenever a customer comes to Sleepy Hollow in need of a rental car—whether it’s for a few days’ trip or just a couple of hours while their personal vehicle is in for repair—Felton hands over a key to one of the EVs. For customers who are brand-new to EVs, a Sleepy Hollow employee takes a moment to explain how the vehicle’s app works, ease their concerns about range, and set them on their way. They return satisfied at least, downright excited at best.

“You need to put people in these things, let them drive it, take it home, and then decide if they want to buy it,” he said. “It’s about showing people, one person at a time, one conversation at a time, and by having these cars in the rental fleet we’re able to do that.” 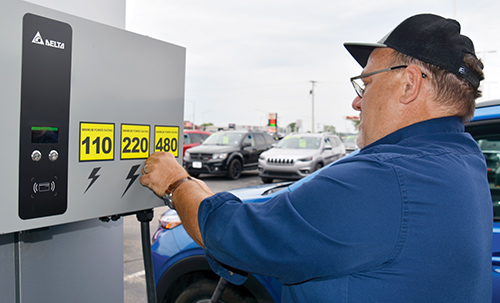 To help consumers feel comfortable with EVs, Felton uses terms and symbols people
are already familiar with. Here, he affixes stickers he designed to resemble the
symbols on a gas tank to help consumers determine how much of a charge to give
the vehicle. 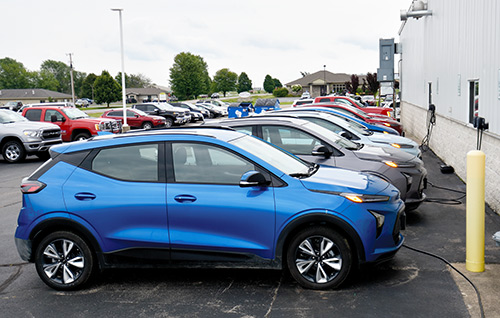 Sleepy Hollow has 12 electric vehicles in its rental fleet.

First-time EV drivers have expressed surprise at several things. First, they discover range is not that big a worry after all. Felton said most of his rental EVs have been getting 250 to 300 miles from a full charge, more than enough for what most people need to drive in a single day.

Some EV drivers are surprised by how quiet an EV ride is, although the soft engine noises that feed through the speakers are soothing to those who might be slightly unnerved by the vehicle’s lack of an engine.

Other drivers are surprised by an EV’s speed. Because electric motors are much simpler than internal combustion engines, an EV accelerates from zero to top speed much faster than gas-powered cars.

However, perhaps the biggest surprise for most people, Felton said, is that ultimately, there really is no big surprise.

“They realize it’s just a car,” he said.

“They enjoy it. They enjoy driving it, and they enjoy talking about it.”

Felton’s own experience with EVs has been equally positive. He said the EV rental fleet is much easier to monitor, the vehicles are largely maintenance-free, and they’ve been performing well, with “zero problems.”

Furthermore, Felton’s promotional plan of simply getting people behind the wheel of an EV has been successful so far in generating awareness, interest, and ultimately sales. When the inevitable surge comes, he’ll be ready, just as electric co-ops will. In true cooperative fashion, electric co-ops and local businesses like Sleepy Hollow are working together.—Mary Erickson