During my 16 years as a state representative, I valued my relationship with the members of the rural electric cooperatives I represented. The members were always engaging on issues and they helped me be fully prepared to represent the issues that mattered to them in the legislature.

With Election Day quickly approaching, America’s electric cooperatives continue to build momentum behind an innovative program to boost the political clout of rural America. Called Co-ops Vote, the non-partisan campaign has one simple goal: increase voter turnout at the polls this November.

In the 2012 elections, rural voter turnout dropped by 18 percent, twice the decline seen across the nation as a whole.

Electric co-ops are deeply rooted in their communities and the decline raised an alarm.  Concerned that the downward voting trend would continue and could diminish the voice of rural America in future elections, co-ops sprung into action.

Participation in Co-ops Vote is strong. More than 560 electric co-ops representing all the states in which co-ops operate are taking part in the effort. As of mid-August, 50 co-ops had achieved “5-star status,” indicating they had undertaken at least five distinct program activities, such as hosting an employee engagement event or voter registration drive, building awareness of Co-ops Vote through newsletter articles, or promoting the campaign on social media.

More than a half million people have seen news about Co-ops Vote through social media, and several thousand have taken the pledge to get out and vote in this election. 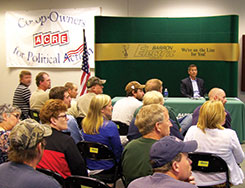 “America’s electric cooperatives are leaders in the communities they serve throughout the country,” NRECA CEO Jim Matheson said. “Co-ops Vote focuses elected leaders on the people who are most invested in the success of their own communities. With 42 million members in 47 states, electric co-ops are a powerful voice on national issues that have a local impact.”

Anyone can take the pledge online by visiting www.vote.coop. The website provides a variety of voter resources and information on key issues, such as the
importance of rural economic development and the continuing need for safe, reliable, and affordable electricity.

Roughly one third of Wisconsin legislative districts are considered rural, another third are made up of medium and large cities, and the remaining one third are suburban districts. Those of us who live in rural communities are outnumbered by those who live in the more populated areas of Wisconsin. I can tell you, a one-size-fits-all approach to politics simply doesn’t work. If we don’t actively engage, the voice of rural Wisconsin will disappear, and legislators who represent urban areas will make decisions that will affect the lives we live in rural Wisconsin.

You can show your support for rural communities by joining co-op members across the country in casting your ballot on November 8.