Co-ops Take a Page from the History Books to Move the Needle on Broadband Expansion, With the Help of Community Partners

The plan was only 11 pages long. In 1934, President Franklin Delano Roosevelt called for the proposal that led to the creation of the Rural Electrification Administration (REA), aimed at electrifying the rural residents of the country. The concept presented in those 11 “powerful” pages led to an executive order, and within two short years 350 electric cooperatives, funded by low-interest REA loans, formed in 35 states including Wisconsin and were powering more than 1.5 million farms, homes, and businesses in rural America. Rural electrification is known as one of the most profound successes in the history of federal policy-making in the United States. Too bad history doesn’t always repeat itself.

It has been more than a decade since government leaders of both parties recognized that high-speed internet access is critical to the rural economy, much like electricity was more than 80 years ago. The Federal Communications Commission’s 2010 report, Connecting America: The National Broadband Plan, was touted as a roadmap that would ensure every American had broadband access by 2020. The reality fell far short of the achievable goal, even though this plan was book-length, 376 pages long. Many co-ops across the country and here in Wisconsin are now taking a “less talk, more action” approach.

“Making things happen is what we do best,” Cornell said.

And he’s right. The co-op and partners were recently awarded a grant from the state Public Service Commission (PSC) to help pay for the installation of approximately two miles of fiber on the mainland in Door County from the Cellcom tower in Gills Rock to the cable shore landing at the Northport Ferry terminal. Cornell and the co-op board had the foresight to include a fiber-optic line with the new electric cable installed in late 2018 after the existing cable failed due to ice damage. This forward-thinking approach means now they can connect the fiber line to the Cellcom tower on the island, extending the option of high-speed internet to 214 homes and businesses, including the Washington Island Ferry Line, the town, emergency services, and school, for the first time ever.

“It means the cooperative will be in a position to move towards expansion for all members sooner and easier,” Cornell said of the grant proposal, which the PSC ranked second out of 124 applications, based on merit. “Fiber to the home and the corresponding reliability and high speeds and low latency means that our members will be able to do things that many folks in the county will not. It is really an economic development driver for the community. It means distance learning for children and adults alike will be easier. Telemedicine becomes more realistic and effective. Services for visitors will be better. There is a myriad of benefits for all.”

And they’re not doing it alone.

Washington Island’s project is a partnership with Nsight, the parent company of Cellcom, a local cellular provider, and Door County, all invested and intent on the same goal—making broadband a reality for their communities, made up of their neighbors and families and friends.

Cooperative collaboration is key in Chippewa and Taylor Counties as well, where Ntera (formed when Chippewa Valley Electric Co-op and Citizens Connected Co-op came together to expand broadband in the region) also received supporting funds from the PSC (PSC grant applicants agree to put up matching funds, or more, in most cases). Three of Ntera’s four applications were among the PSC’s selected approvals, which means close to 400 more homes and businesses will soon have broadband access, again thanks to the synergy of strong partnerships. Ntera is working in collaboration with Dairyland Power Cooperative, Jump River Electric Cooperative, Eau Claire Energy Cooperative (ECEC), Taylor County, and local towns and villages to make these projects happen. Russ Falkenberg, director of IT & member services at Chippewa Valley Electric Cooperative, says the Town of Goetz contributed to the construction of one project, as did Eau Claire Energy, as it will connect their Cadott substation.

The collaboration with partners, both formal and informal, has been amazing,” said Falkenberg. “There is no battle over recognition or credit; everyone is working together to get broadband to their respective members and residents. This has been one of the most rewarding projects I’ve ever been involved in.”

“For years, I’ve been trying to get reliable broadband to our township. I’ve contacted the big players such as CenturyLink and Charter. Simply put, they have no interest in serving the rural areas,” said Town of Arthur Chairman Cory LaNou. “When I approached Ntera, not only were they willing to partner with us to achieve our goals, they went above and beyond by helping our town win grants that allowed us to finally start bringing in the much needed broadband.” 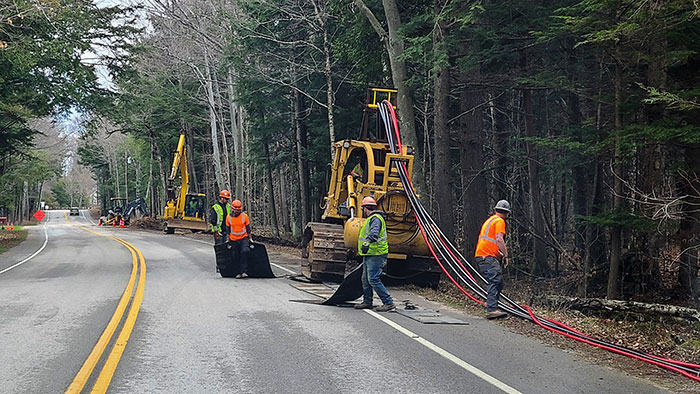 Pierce Pepin Cooperative Services (PPCS), like Ntera, was largely denied funds awarded in the FCC’s recent Rural Digital Opportunity Fund (RDOF) reverse auction, which mostly favored large telecom companies, and newer, lesser-known companies like LTD Broadband, but PPCS is also getting funds from the PSC. Two of PPCS’s three applications were approved, which means they will be able to extend high-speed internet to more than 550 homes and businesses in Pierce County areas that are very much underserved.

Pierce Pepin President and CEO Nate Boettcher said the PSC funds take away some of the sting of losing out in the RDOF auction to some “bigger players” who have failed to follow through with broadband expansion commitments in the past.

“In our area specifically, we heard 20 years of promises by Tier 1 telecoms that took federal money but never served the rural areas,” Boettcher said. “The question I get asked is, ‘If PPCS doesn’t do this, who will?’ The fact remains, broadband is our electricity challenge of the 1930s. Our distribution system and our members not only depend on it today, but it will be a baseline requirement for living by all future generations.”

It appears that President Joe Biden is among those who recognize that electric cooperatives, and other local entities, are key to fulfilling broadband expansion promises in rural America. His $2 trillion “American Jobs Plan” released in March cites the success of the Rural Electrification Act and says, “Broadband internet is the new electricity.” The plan, which includes a record $100 BILLION investment in broadband expansion, gives preference to electric cooperatives and municipal utilities and is already getting fierce pushback by big telecom companies.

To put the cost in perspective, that 11-page plan that led to the electrification of rural America back in the 1930s estimated the total cost to run power to all unserved rural residents in the country would be up to $200 million, but Congress went further and approved $410 million. Adjusting for inflation, that would be the equivalent of about $8 billion in today’s dollars. December’s RDOF auction alone awarded $9 billion in broadband expansion funds, and the president now wants to spend $100 billion more on broadband expansion.

While there are many similarities between broadband expansion and the electrification of rural America, there are also many stark differences. Unlike electrification, broadband providers don’t have a guaranteed customer base. Some people don’t want, or can’t afford, high-speed internet, and those who do are always free to consider other options. Electric cooperatives have to weigh all of the factors before taking on a project, and some find the risk to members is too great.

Broadband expansion will likely not be remembered as one of the great policy-making moments in the nation’s history, but with the synergy build of local partners and electric cooperatives, it appears true broadband expansion may finally get done.

“We have found through experience with the big telcos that it would be better if rural areas were able to be in control of their own destiny,” Cornell said. “Cooperatives serve their members, not outside interests or shareholders.”

Perhaps the greatest benefit for members poised to be served by the latest Wisconsin co-op projects is the timeline. Pending the delivery of materials and supplies, the co-ops are working aggressively to get the jobs done, compared to recipients of the RDOF funds whose long-form proposals are still under review by the FCC, and could be for another year. Once approved, it could be six to ten more years before those projects are complete, if ever.