It’s impossible to feel blue during blueberry season. For starters, blueberries literally make you feel good. Packed with antioxidants and loaded with nutrients, blueberries bring a bounty of health benefits.

They’re also tasty and versatile. Blueberries can be baked in pies and muffins, sprinkled on cereal, tossed in salads, stirred in smoothies, cooked into jams and sauces, and, of course, plucked right from the bush and eaten on the spot.

Fresh off the bush might actually be the best way to enjoy them, and not just because biting into a fresh blueberry gives you juicy burst of sweet flavor. Since blueberry season comes round usually in July and August, a berry-picking excursion puts you right in the middle of all that is wonderful about Wisconsin’s countryside in the summer: warm sunshine, fresh air, bright colors, sweet aromas, a slower pace.

That does, however, lead to about the only strike against blueberries that we can think of—they’re not quite as ubiquitous in this state as some other forms of berries, exacting as these plants are about their soil. If you’re looking to pick some blueberries, you might have to travel a bit.

However, a little travel to a pick-your-own place is well worth it, especially if it’s one of the following blueberry farms, both located on electric cooperative lines. Blueberry Ridge Orchard in Eleva and Rush River Produce in Maiden Rock are places where memories are made. Located in peaceful rural settings, each farm offers a full, family-friendly experience. People of all ages might come for the blueberries, but they leave with so much more. 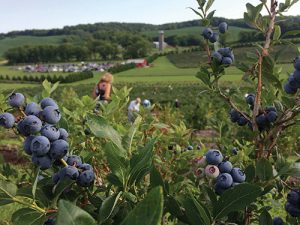 With its pastoral surroundings, Blueberry Ridge Orchard offers a peaceful experience as well as more than seven varieties of blueberries. Photo courtesy of Blueberry Ridge

Located on Eau Claire Energy Cooperative’s lines, Blueberry Ridge Orchard is all about family. Owned and operated by Andrea and Mark Nyseth, the orchard is located on 80 acres of farmland that’s been in Andrea’s family for three generations. Her grandparents were dairy farmers; her father raised beef cattle.

Mark also grew up with a love of working the land. His childhood memories include days spent picking berries with his grandfather. When he and Andrea purchased the farm from her father in 2003, it was Mark’s idea to turn it into a blueberry operation. After a lot of research and work with the soil to accommodate the needs of the finicky plants, the Nyseths planted their first blueberry bushes in 2004. Two years later, they were picking blueberries.

Today, the Nyseths’ blueberry plantings have grown to cover 20 acres for picking. They also have 12 acres of apple and plum trees, bee hives by the apple trees, and they rent some hay ground to a neighbor who raises bison. “We utilize every inch of our land agriculturally that we can,” Andrea said.

They tend to the crops with the help of family members, including two adult children and two grandchildren, who are carrying on the Nyseths’ love of sustainable agriculture. Other family members help out as needed, especially during the busy picking season.

Blueberries are available pre-picked either right on the farm, at the Eau Claire Downtown Farmers Market, or at a local grocery store in Strum. But the real attraction is the farm itself; during blueberry season, guests may come out to the farm on Fridays, Saturdays, and Sundays and wander along the ridge to pick their own berries and immerse themselves in the soothing surroundings. 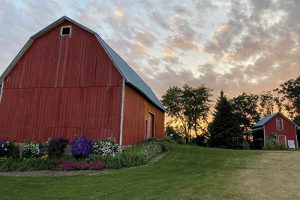 Unlike raspberries, which are ready for picking as soon as they turn red, blueberries will become sweeter and plumper if they’re left to hang on the plants for a few days after they turn blue. Photo courtesy of Blueberry Ridge Orchard.

“It really is about the experience,” Andrea said. “What we focus on is quality produce, a wonderful people experience, and a low price. You’re going to be on the hillside; you can bring your children. We welcome families to come. Whatever age demographic, it’s just such a fun and enjoyable, peaceful experience.”

Many customers have become like family over Blueberry Ridge’s 17 years of operation. The Nyseths have watched the children of regular customers grow from babies into teenagers. Their beautiful farm has served as the backdrop for countless family pictures and other major milestones; one couple even got engaged out in their blueberry field. “How much better does it get than that?” Andrea said. “We’re very blessed.”

These special connections with family—biological or otherwise—are part of what makes farming more than just an occupation for the Nyseths.

“People talk about farming and all the hard work, and it is,” she said. “It’s a lot of long hours. But there is just something about it that is hard to put into words. Getting to work with the land and work with your family, and doing something where it’s providing food for others and enjoyment for others when they come to pick—it’s really hard to put into words what it’s like.” 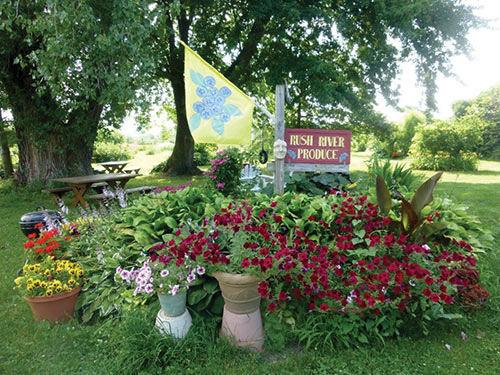 The Cuddys’ 9 acres of U-pick blueberries are the result of 35 years of hard work, the first five of which were spent preparing the soil and nurturing the young plants.

“Thirty-five years ago when we started it seemed like a good idea, is the best way to explain it,” John said of their venture into blueberries. “Very few other people had tried it. There were some other commercial growers out west of the Twin Cities but nothing here. We were lucky and smart, and we worked hard.” 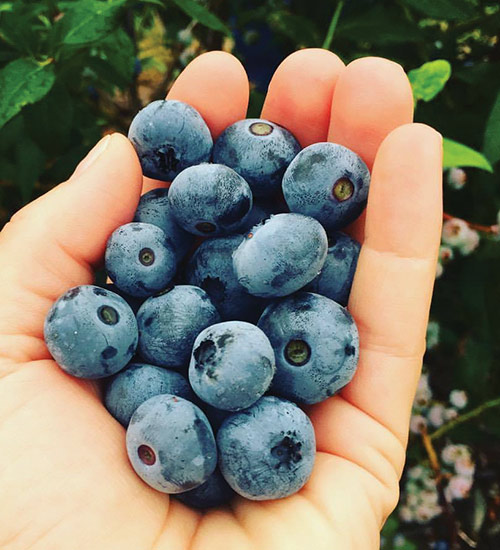 The first step, John said, was to duplicate the acidic soil blueberries need to thrive by adding sulfur, as much as a ton and a quarter per acre at first. Then came pruning, fertilizing, mulching, irrigating, and basically a lot of trial and error, followed by some years of work to promote the business and grow sales. As recognition of blueberries’ many health benefits grew, so did business.

Today, Rush River Produce is a must-stop destination for thousands of people who come every year for the juicy, sweet berries (Rush River also grows and sells red and black currants, and a limited supply of gooseberries), but also to spend some quality time together. On Rush River’s website, the Cuddys ask visitors to “please bring your family to meet ours,” and that sentiment carries through the entire farm.

“We’re real relaxed,” John said. “We are kid friendly. We’ve got kids running all over the place. No point in doing it if the kids can’t have fun. We’ve got a tire swing, slide, big places to run around. Kids can run around and yell and scream, and they don’t have to act civilized if they don’t want to.” 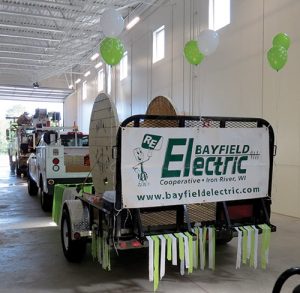 While blueberries are difficult to grow in many parts of the state, they thrive in far northern Wisconsin, where the soil is naturally acidic and the more moderate temperatures of the Lake Superior region create a micro-climate suitable for orchards and berry farms. Wild blueberries are also abundant in the woods and alongside some of the rural roads near Iron River, where Bayfield Electric Cooperative is headquartered.

Iron River celebrates its bounty of blueberries every year at the Iron River Lions Blueberry Festival, held this year July 24 and 25 at Moon Lake Park on Cty Hwy. H in Iron River. This event is filled with festival activities including a blueberry pie-eating contest (of course), fireworks, and a parade through Iron River on the 25th. Bayfield Electric supports this annual event with a donation each year, and frequently has a float in the annual parade. If you want get in on this special kind of blueberry fun, call 715-372-5253 or visit irlions.com for more information.

The property is dotted with picnic tables, filled with acres of colorful perennial gardens, and surrounded by the hills of Coulee Valley, overlooking nearby Lake Pepin. It’s the perfect place to simply spend a peaceful day in the country.

“We have people driving in from hundreds of miles away for family reunions, parties, and we have one outfit that usually brings foreign students out for a picnic, which is great,” John said.

Rush River Produce is open for picking on Thursdays, Fridays, Saturdays, and Sundays during blueberry season. As with all crops, blueberries are dependent on the weather, so availability varies from year to year, and sometimes even day today. John encourages all guests to call before driving to the farm to make sure blueberries are ripe and ready to pick. “I’d rather disappoint you on the phone than in the driveway,” he pointed out.

Other than that, “all you need is a good appetite, nimble fingers, and lots of family to help,” John said.
—Mary Erickson

Blueberry Ridge Orchard is located at E2795 Hageness Road, Eleva, WI 54738. It’s open Saturdays and Sundays, July through October, and also on Fridays during blueberry picking season. To learn more, call 715-287-3366 or visit blueberryridge-orchard.com, or follow them on Facebook.