How Intermittent Generation Can Always Be On

Whether there is an upper limit to the percentage of U.S. energy consumption that can be supplied by renewable sources is a question vigorously debated. Seldom is it debated so vigorously as last summer, when Stanford University Professor Mark Jacobson filed a $10 million defamation suit against fellow academics who criticized his 2015 paper claiming that by midcentury, the U.S. could be powered 100 percent by renewable energy “at low cost.” In February, Jacobson withdrew his lawsuit, but as the still-modest percentage of renewables in the energy mix increases, the debate gathers momentum.

At the heart of the discussion are two issues inextricably linked to renewable—meaning chiefly wind and solar—electric generation: intermittency and storage. Without immense capability for the latter, the former presents an insuperable barrier to the creation of a modern economy powered primarily, or even substantially, by renewables.
And a debate within the debate is what form of electricity storage holds the most promise for bridging gaps that could range from a few minutes to a few days when the wind is inadequate or excessive, when a persistent overcast renders solar panels ineffective, or, as happens once in every 24-hour period, night falls. Real and hoped-for advances in battery technology receive most of the media attention, but people are at work on other ideas too.

Like the other technologies discussed in this article, batteries have been around for a long time. What sets all of them apart for purposes of 21st century energy storage is the scale on which we hope to make them operate.
Take a look at the label on a package of batteries at any hardware store, and you’ll see the contents labeled both as batteries and as “pilas” or “piles.” These are, respectively, Spanish and French words for batteries derived from the term “voltaic pile,” used to describe the first chemical battery made by the Italian physicist Alessandro Volta 218 years ago. This side of the Atlantic, early battery experiments were being conducted in the latter years of the 18th century by—naturally—Benjamin Franklin.

So one thing batteries and the wind and the sun have in common is that people have used them as energy sources in one way or another for centuries. And while battery technology has been greatly refined, the basic principles haven’t changed. The challenge for today and the decades to come is to massively increase the storage capacity and discharge time afforded us when we employ what’s basically an 18th century concept.

In 2015, Tesla Motors introduced its “Powerwall,” a rechargeable lithium ion battery pack designed to complement residential solar generation. According to EnergySage, an online comparison-shopping service for solar equipment and installation, a Powerwall unit now costs about $5,900, not including installation which, depending on complexity, can cost more than the unit itself.

Tesla’s device enables a homeowner to balance the electric generation and consumption of an individual solar-
equipped residence, but according to EnergySage, a single battery pack will power a home for only a few hours. In short, it doesn’t operate on a scale that would serve to back up the grid.

A May 3 article in PV Magazine reported that Tesla’s energy storage deployment volume for 2017 was 410 megawatts. That’s equivalent to a little more than the nameplate capacity of the single generating unit at Dairyland Power Cooperative’s J.P. Madgett plant at Alma. But the PV article also mentioned that Tesla CEO Elon Musk has hinted that the company may be within months of introducing a “gigawatt sized energy storage system.” That would be getting into a capacity range that might usefully back up the grid, though a great many such systems would be needed. Total power plant capacity in Wisconsin alone exceeds 20 gigawatts, according to the state-published Wisconsin Energy Statistics.

In April, Standard and Poor’s noted that through 2017, only about 700 megawatts of battery energy storage capacity had been deployed on the entire U.S. grid. 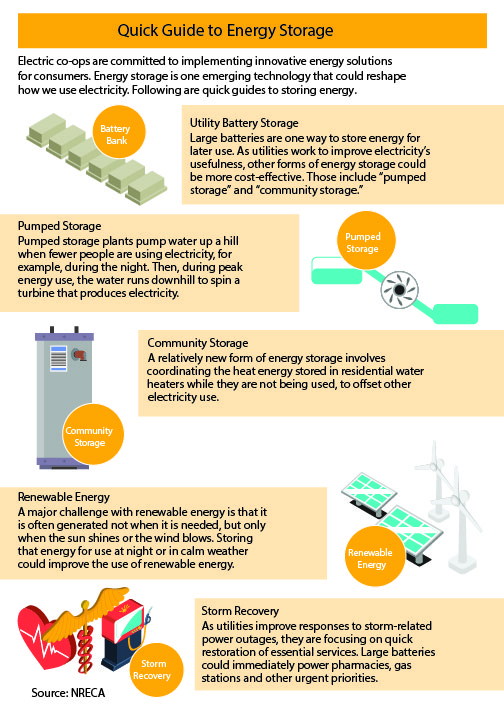 The PV report didn’t indicate whether Musk said Tesla’s new system would use lithium-ion technology, but its Powerwall does, and at the beginning of May, the Massachusetts Institute of Technology’s (MIT) Energy Initiative warned that the energy storage industry ought not commit prematurely to lithium-ion, for fear of crowding out other technologies that might be more appropriate for utility-scale storage.

Utility Dive, an online industry newsletter, cited a Greentech Media report that lithium-ion technology held a 98.8 percent share of the U.S. energy storage market at the end of last year.

But there’s no shortage of alternatives to battery storage. They involve converting electricity as it’s generated into different forms of usable energy, to be converted back to electricity as needed.

One such technology that was already providing energy storage nearly a century ago is pumped hydroelectric generation. During periods of relatively low demand, surplus electric generation is used to pump water out of one reservoir and into another at a higher elevation. When extra electricity is needed, the water in the upper reservoir can be released to spin hydroelectric turbines on its way to being recaptured in the lower reservoir.

A pumped-hydro building boom was envisioned in a 2016 Energy Department (DOE) report claiming U.S. hydroelectric generation could be increased by almost half. (See “High hopes for hydro,” Wisconsin Energy Cooperative News, November 2016.) The DOE estimated U.S. hydro capacity could be expanded by 49 gigawatts, with nearly three-fourths of that capacity coming from new pumped storage facilities to be purpose-built as backup for wind and solar, between 2030 and 2050.

But of course that would be expensive. As the Energy Information Administration—a division of the DOE—put it in 2014, growth of U.S. hydro capacity is “limited by economics, not resources.”

The Energy Storage Association (ESA), an industry group, counts 38 existing U.S. pumped hydro facilities with a combined ability to store a little more than 2 percent of the nation’s total electric generating capacity, and notes that the technology has been in use here and in Europe since the 1920s.

A Weighty Matter If you’ve ever owned a clock powered by suspended weights, you’ve already seen a miniature demonstration of an energy-storage technique British analysts say can get the job done less expensively than batteries.

A start-up company called Gravitricity has obtained U.K. government financing to test its concept, which resembles pumped hydro in that both depend on heavy weights put in motion.

In April, Businessgreen published a story reporting that Gravitricity proposes to suspend weights up to two million pounds in disused mine shafts. (Let’s introduce an element of symmetry many will appreciate and suggest the company has found a way to get emissions-free electricity from coal mines.) When surplus generation is available, the weights are winched to the top of the shaft. When extra power is needed, the weights can be released and as they descend, the winches function as generators, producing lots of electricity very quickly or less power at a slower pace, depending on demand.

Analysts at Imperial College London, Businessgreen reported, say the Gravitricity system should be able to produce power at $141 per kilowatt, compared with $154 for lithium-ion batteries and $187 for lead-acid batteries.
A downside is that the Gravitricity technique is designed to operate very briefly on each cycle, providing backup power for hypothetical 15-minute periods. Businessgreen said the expected power output of four megawatts over a short period could “help manage the real time grid balance between system demand and total generation.” An upside is that the system would have a life expectancy of 50 years and could cycle through several times daily.
Spending in Pursuit of Savings Building redundant energy systems to ensure continuous backup is expensive, but perhaps surprisingly, the ESA says the technologies offered or under examination by its members can save consumers money in at least four ways. It lists reduced cost of providing electricity, allowing consumers to avoid peak-demand pricing, fewer outages, and reduced outage time. (ESA’s international membership includes the
National Rural Electric Cooperative Association, the National Rural Utilities Cooperative Finance Corporation,
and Wisconsin-based American Transmission Company and Johnson Controls).

The few technologies described here barely scratch the surface of known or developing energy storage methods. The one certainty is that every percentage increase of renewable generation on the grid makes the next improvement of storage technology more important.