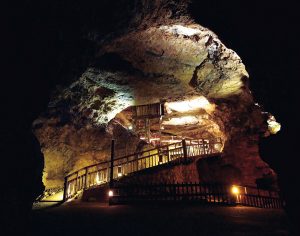 Talk about taking a trip down the rabbit hole. In 1881, two little farm boys by the names of William and George Vanasse were chasing a small animal near their home in the Spring Valley area when the creature disappeared down a hole. Their attempts to examine the animal’s getaway by poking a stick in the opening were thwarted when the stick disappeared under the surface as well.

Call them brave or call them crazy, but the Vanasse brothers returned the next day to explore the strange hole some more. They lowered themselves through the opening, dropping into a dark, dome-like space filled with clay and debris and then farther down to another level with shallow entrances leading to other directions. Unbeknownst to the curious boys at the time, they were the first known human visitors to what would come to be known as Crystal Cave.

They would be the first of very many. Today, Crystal Cave, located on St. Croix Electric Cooperative’s lines, is Wisconsin’s longest show cave at just under a mile, with about a third of it developed for public tours. 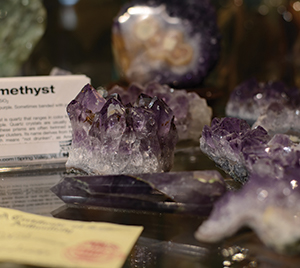 All gems, minerals, and fossils uncovered at Prospector’s Creek are genuine. Gems are also available in the museum gift shop. Photo courtesy of Keith Wohlfert.

According to this publication’s predecessor, Wisconsin REA News, Crystal Cave welcomed 4,000 visitors on June 7, 1942, the cave’s opening day as a public attraction. These days, as many as 50,000 visitors pass through each season to marvel at the cave’s stalactites, stalagmites, and crystal formations.

In season, cave tours are open rain or shine. No matter what the weather’s doing above ground, conditions are always the same below.

“It’s 50 degrees year-round—that’s the average temperature in Wisconsin,” explained Eric McMaster, Crystal Cave’s executive director. “It’s a nice place to visit when it’s cold out because it’s nice and warm there, relatively, and then in the summer when you’re trying to get out of the heat the cave is nice and cold because you’ve got nature’s air conditioning.” 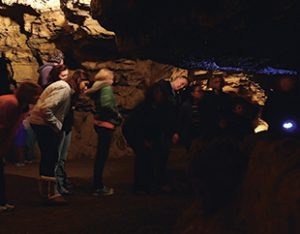 Tours for All Types

Visitors have several tour options. Most popular by far is the main tour of Crystal Cave, which takes guests through a 70-foot elevation change through three separate levels. The pathways and stairs along this tour are developed for public use and lit with energy-efficient LED bulbs. These tours are led by knowledgeable guides who teach visitors all about the cave’s history, geology, and bat population.

New this season for guests who would like a more authentic spelunking experience are early-evening lantern tours of Crystal Cave, which for safety reasons come with more restrictions.

“All the lights are shut off so it’s not for kids,” McMaster said. “People always want to see how dark the cave really is—what it’s like with the lights off. It’s a fun experience, particularly with the little lanterns like what the Vanasse brothers might have had in 1881. Our lanterns are rechargeable, but it’s the same idea.”“We set you up with hard hats and lights and gear,” McMaster said. “It’s a walking tour. You get a true caving experience.” 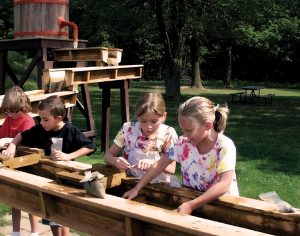 A newer feature of Crystal Cave is Prospector’s Creek, where children can try their hand at gem panning.

Not all of Crystal Cave’s attractions are below the ground’s surface. A separate activity that’s become increasingly popular is Prospector’s Creek, where young visitors can try their hand at panning for gems or fossils over an old-fashioned sluice.

“We’re mimicking what it would have been like in the 1800s, with real post beam construction,” McMaster said. “We’ve got almost 60 stations for gem panning. Staff are out there helping—it’s a lot of fun. We’ve got all sorts of incredible gems and minerals, and real fossils like trilobites and gastropods. They’re all authentic, and they’re from all over the world.” 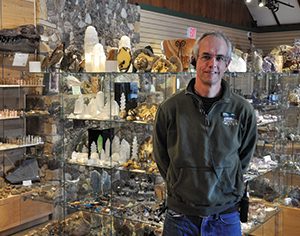 In addition, the Crystal Cave grounds include a half-mile interpretive nature trail open to all visitors, with spacious picnic grounds complete with a covered pavilion, tables, and charcoal grills. Guests are welcome to pack a picnic lunch, or they can purchase some refreshments that are available in the visitor center/gift shop.

Separate from the public tours but equally important to the cave’s purpose is its role as a scientific research site. At any given time, an active research project is underway in Crystal Cave through partnerships with universities, weather data programs, and conservation organizations. 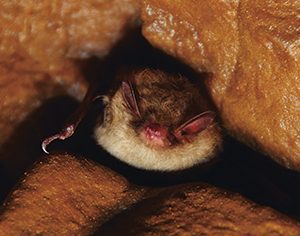 The cave is also a hibernaculum to four species of bats.

“We probably have the most researched bats in the nation,” McMaster said. “Right now we’re working on a project with Santa Cruz University, where we’ve installed radio transmitters on our bats, and then we have a radar on the entrance so we’re able to track whenever bats enter and leave the cave. There isn’t a lot known about that activity, especially in the spring and fall when the bats are entering and exiting their hibernation site.” Last summer, he added, Crystal Cave partnered with the Department of Natural Resources in a study that helped determine where bats go when they leave hibernation.

“We actually put little powerful radio beacons on several bats here, and then when they woke up and left the hibernaculum the DNR had crews of people with radio receivers driving around the countryside seeing where the bats are flying to.”

McMaster said data gleaned from such projects aids in research to, for example, find ways to protect bats from diseases such as White-Nose Syndrome. 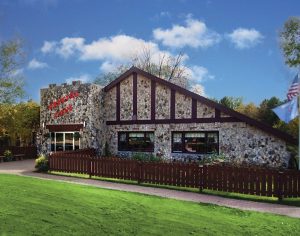 Unless otherwise attributed, all photos are courtesy of Crystal Cave.

The young Vanasse brothers would no doubt be surprised to see that their daring discovery has evolved into a popular show cave and a key scientific research site. A tour of Crystal Cave today is not the trip down the proverbial rabbit hole that it was for these two adventurous boys, but it’s very much a wondrous experience.—Mary Erickson

Crystal Cave is Wisconsin’s longest cave at just over a mile long. A major exploration in 1992 nearly tripled the length of the known cave. Exploration continues today, with more footage constantly discovered.