Have you ever been looking for something very specific and while you’re at it, run across something you never expected to find? That happened to me last month and I’d like to share the story because it’s about when my family became electric cooperative members.

As mentioned in previous columns, my family has lived in southwestern Wisconsin for a long time. Our home farm has been in the family since 1874. But there’s another farm, and I wasn’t sure just how long it’s been in the family. Both are relatively small by today’s standards but in the old days they were considered fairly large for one family farming with horses. Last month, while looking for some documents for my mother, I ran across a file from 1959. In it was the certificate given to my dad upon becoming member number 7222 of Grant Electric Cooperative on February 28 of that year. 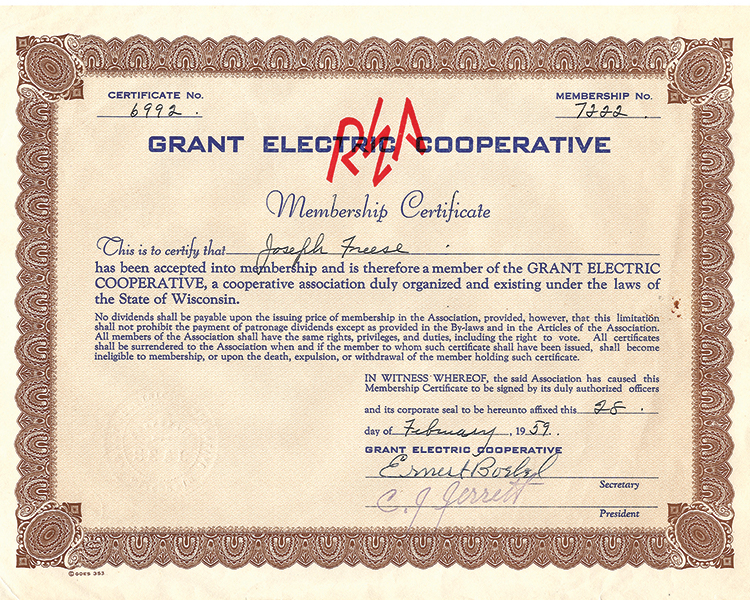 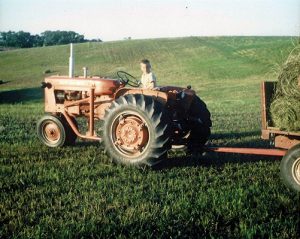 I also found the purchase agreement for my dad’s first new Allis Chalmers Tractor, a D14 Row Crop, and the invoice for his new Allis Chalmers All Crop 66 Combine. Both were bought new at the same time he became a member of the electric co-op. The tractor cost him $2,688.25 and the combine $1,579.40. That brought home how some things have really changed since 1959—like the price of tractors and combines—and how little other things have changed, like the affordability of electricity from the co-op.

Finding these documents sent me on another quest— to figure out just how long our family has been co-op members and when my ancestors acquired the second farm. Luckily for the history lover in me, the family has saved everything about both farms. I pulled out the deed and abstract and started reviewing it, and found to my surprise the “second” farm has been in the family for 165 years—21 years longer than the home farm, but it didn’t carry the Freese surname since it was in my grandpa Freese’s mother’s family line.

All this history led to wondering which of my ancestors was the first to sign up as a member of Grant Electric Cooperative. Was it my dad in 1959 or another before him? Scenic Rivers Energy Cooperative retains the records from Grant Electric and was more than willing to help me find who in my family was the first to sign membership papers. It looks like the lights came on at 404 Logan Road when my father became a member in 1959.

This month we celebrate our nation’s founding, the event that established the freedom that allowed our ancestors many years later to found their own electric cooperatives to meet their common needs—one more thing that hasn’t changed.