“It takes a village to raise a child,” as the saying goes. 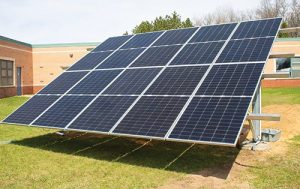 The solar array outside of Lincoln Elementary School is just a step outside the classroom.

In this case, the village is the collaboration of Jackson Electric, JacksonSolar, OneEnergy Renewables, and the Alma Center-Humbird-Merrillan and Melrose-Mindoro School Districts to make solar for each of these schools a reality. “Having our own solar system on site changes solar from a concept taught in the classroom to a hands-on learning experience,” shares Mel-Min Superintendent Jeff Arzt.

The idea for the project originated about three years ago, shortly after the incorporation of JacksonSolar. Early on, Jackson Electric’s Member Relations Manager Carol Blaken began talking with the school districts served by Jackson Electric’s service lines to see if there was any interest in each working together on a solar energy project. “Initially, JacksonSolar was incorporated to educate about solar energy, and one of our cooperative principles focuses on just that. We knew we needed to start the solar education process somewhere,” says Carol. “The best outreach is to our schools, where solar education can be built into the curriculum.” 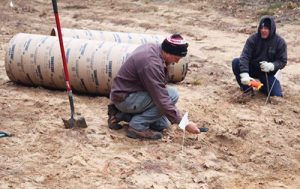 The school districts were on board and receptive of the idea. “We were quite excited when Jackson Electric approached us,” shares former AC-H-M Superintendent Paul Fischer. “It’s important for students to see the relationship between schools and businesses. We’ve had a great partnership with Jackson Electric with our students participating in the youth ambassador program.”

Over the last few years, Jackson Electric and JacksonSolar did their homework in creating a plan on how to make the project happen. “The largest obstacle for JacksonSolar, at that time, was determining how to pay for this investment in education,” says Carol. “JacksonSolar was in its infancy and a donation of that magnitude would be difficult for the business to absorb.” 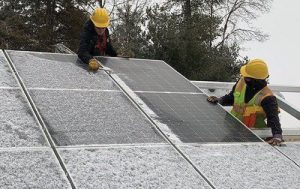 Patience was key in this project as momentum for the project started to gain traction when Jackson Electric formed a working relationship with Eric Udelhofen, project development director at OneEnergy Renewables, during the construction of the commercial solar sites in Jackson Electric’s service territory. “We reached out early on in the project about the possibility of donating any spare panels at the end of the construction to install solar at schools in the area,” Eric shares.

OneEnergy strives to incorporate community outreach into all of its projects, with the Mel-Min and AC-H-M projects being the first, but not the last, school-based projects. “We worked with nonprofit organizations in Ashland where panels were installed for a women’s shelter and a food pantry. Our goal is to get solar in a more visible position and increase awareness to a broader audience,” says Eric.

“We want our students to understand the difference between renewables and non-renewable resources. I’m interested in renewable energy and the opportunity to teach students about taking care of the environment and how it can impact the future.” – Brad Rogers, Principal, Lincoln Elementary School

If you take a drive past the Mel-Min school on Highway 108, you can see the panel installed near the maintenance shop. The system produces enough energy to offset the energy usage for this building. “We were excited to see the district moving forward, being part of the solution,” shares Jeff. “It’s important for students to learn how they can power change and have real world discussions and think critically about renewable energy, energy efficiency, the true cost of installation, generation, storage, and careers in the clean energy sector.”

“I’m also looking forward to working with the school’s agricultural instructor on this project,” says Carol. “At the Mel-Min school, the panel is constructed in an area where the students could start a pollinator project of some sort. I truly believe the opportunities to educate with this system are limitless.” 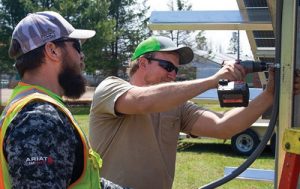 The array at Lincoln Elementary School is not as visible from the road, but it is in an area where students will be able to look out the classroom window or take a step outside for outdoor learning. “Solar will be incorporated into the fifth- and sixth-grade science curriculum,” says Lincoln Elementary Principal Brad Rogers. “They will participate in monthly lessons on analyzing the system’s production versus the school’s usage, which will also incorporate math and graphing. We plan to build in other activities as we develop the curriculum.”

When it takes a village, it helps when everyone involved has the same goals and motivation. The school solar projects will be a powerful way to introduce the solar energy concept and provide firsthand experience with solar. “It’s a new concept, and some people don’t have the background education on how beneficial solar can be,” shares Paul. 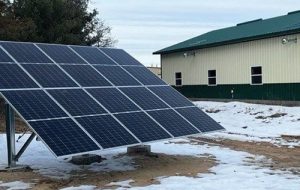 The panel at the Melrose-Mindoro School district is visible from Highway 108 and produces enough energy to offset the maintenance shop’s consumption.

“We want our students to understand the difference between renewables and non-renewable resources. I’m interested in renewable energy and the opportunity to teach students about taking care of the environment and how it can impact the future,” adds Brad.

Jackson Electric and JacksonSolar hope that students learn the facts about solar energy to be more informed consumers and start recognizing career paths in the energy sector and trades. Cooperatives, like Jackson Electric, are concerned about their community; education, training, and information are rooted in the seven cooperative principles. “It’s an exciting partnership with JacksonSolar being new to the industry and providing this donation,” says Carol. “We’ve enjoyed working with our schools and youth for so many years. Community is important to us.”—Brandi Shramek, Member Relations Advisor