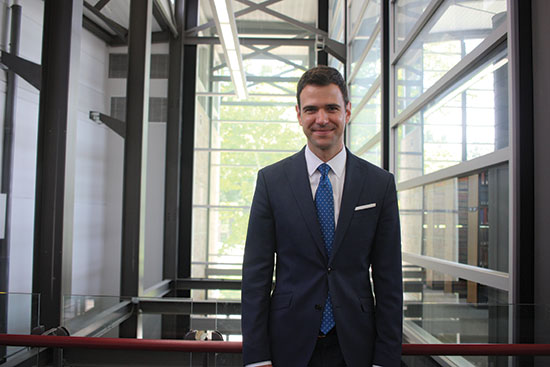 University of Wisconsin Law School student Will Kramer of Middleton is the 2017 winner of the Federated Youth Foundation’s (FYF) Charles Van Sickle Scholarship.

University of Wisconsin Law School student Will Kramer of Middleton is the 2017 winner of the Federated Youth Foundation’s (FYF) Charles Van Sickle Scholarship.

The $2,000 scholarship is given to a law or pre-law student who has an interest in cooperative law. It’s funded through an endowment established in 2013 to honor Wisconsin’s renowned electric cooperative lobbyist and attorney, the late Charles Van Sickle.

Kramer has worked as an investigator with a United States Senate oversight committee under the leadership of then-Senator Herb Kohl and as a safety and risk management consultant to companies across the country, including employment with a mutual insurance company.

“Will demonstrates a deep interest in cooperative business and an aptitude to excel as an attorney,” said FYF Executive Director Ethan Giebel.

Energy Information Administration (EIA) data released in October show residential electricity prices increased 3.1 percent on a nationwide average during the first half of 2017. The increase was smaller in the region that includes Wisconsin.

The data is broken down by federal census division to reflect regional variation. The East North Central division (including Wisconsin, Michigan, Illinois, Indiana, and Ohio) saw a below-average price increase of about 2.5 percent.

The highest kilowatt-hour prices and largest percentage increase were both recorded in the Pacific division (Alaska, Hawaii, Washington, Oregon, and California), at more than 25 cents and almost 7 percent, respectively.

With the economic viability of nuclear generation under competitive pressure from natural gas and renewables, the Department of Energy announced it will guarantee $3.8 billion in loans for the only nuclear expansion currently underway in the United States.

The amount is in addition to $8.3 billion in loans previously guaranteed for the Vogtle 3&4 project, adding two new reactors at an existing Georgia nuclear site. The project is expected to be operational in 2022.

Dan Meyer, who served six terms as a member of the state Assembly representing Vilas and Oneida Counties between 2001 and 2013, is the new secretary of the Department of Natural Resources.

Meyer was appointed by Governor Walker, who had previously elevated Deputy Secretary Kurt Theide as interim secretary at the end of August when Cathy Stepp vacated the top agency position to become principal deputy administrator at the U.S. Environmental Protection Agency Region 7 headquarters in Lenexa, Kansas.