Why the latest federal effort to bring broadband to rural America is already rife with red flags.

As 2020 wrapped, many people were filled with optimism for the future, looking forward to what 2021 may bring. That includes many in rural Wisconsin hoping this would be the year they finally get broadband access. It was looking really good in the Pierce Pepin Cooperative Services area. Over the past 12 months, co-op leadership surveyed, researched, investigated, campaigned, and explored the feasibility of getting into the broadband expansion game, and ultimately decided to make a pitch for federal funds so they could offer high-speed internet to 5,500 members who currently don’t have the option.

“For members who lack broadband, the opportunities for working from home, doing virtual classrooms, participating in video conferences, or using telemedicine are nonexistent,” said Nate Boettcher, president and CEO of Pierce Pepin Cooperative Services (PPCS). “Connectivity is no longer a nicety; it’s a necessity.”

The Federal Communication Commission’s (FCC) $16 billion Rural Digital Opportunity Fund (RDOF) reverse auction, which wrapped in late November, offered the greatest glimmer of hope for many in rural Wisconsin, as local entities, including electric and telephone cooperatives, competed for federal funds to expand broadband to their members. As the pandemic accelerated the paradigm shift to life online, there was a light at the end of the tunnel. Finally.

The RDOF is the latest in a string of pricey federal programs set up to expand rural broadband. Broken promises and lack of accountability plagued past programs. According to the FCC, the federal government has committed $22 billion over the past five years alone for rural broadband expansion, and yet 175,000 people living in rural Wisconsin—from areas near Evansville to Rib Lake to Belleville—still have no access at all, and nearly 600,000 don’t have access to the defined speed of 25 Mbps or faster, according to Broadband Now.

The subsidy road to broadband expansion started years ago with investments from the Universal Service Fund (paid for by you, with a 21 percent fee on every landline and cell phone bill), which became the Connect America Fund (CAF) in 2009. The CAF program largely failed when the FCC limited the grantees to the biggest players, awarding companies including Verizon, CenturyLink, and Frontier large territories to expand broadband for big bucks, but some of them never did, essentially “freezing out” expansion opportunities for local players for years. 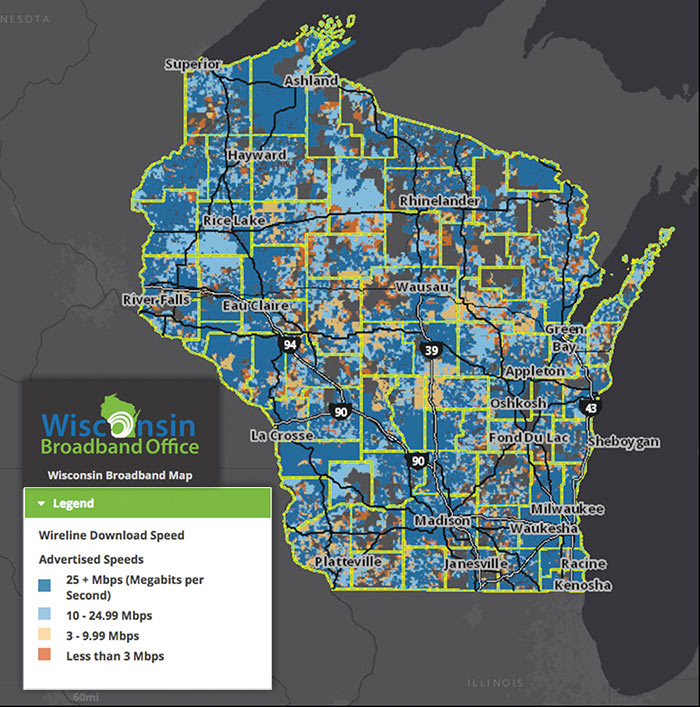 In 2010, the American Recovery and Reinvestment Act included $7.2 billion for “complete broadband and wireless internet access,” with the goal of “leading the world in mobile innovation with the fastest and most extensive wireless network of any nation.” That turned out to be a lofty goal. You can’t be a world leader in the industry when people in Ellsworth and Arcadia still have to drive to Starbucks for WIFI.

The 2020 RDOF auction promised to avoid the pitfalls of CAF and other programs by allowing entities invested in their communities, such as electric and telephone co-ops, to participate. In the reverse auction, the bidder who offers the highest speed and lowest latency at the lowest bid wins the grant dollars to extend service to each specific census block. Co-ops are an obvious choice, as they already have existing business service and infrastructure and knowledge of the geographic challenges in their areas. In addition, co-ops have stability in funding, access to low-interest loans, and a proven success record.

Ntera, for example, formed in 2018 when two cooperatives—Chippewa Valley Electric Cooperative and Citizens Connected—came together to bring broadband to members in the Chippewa Valley area. Ntera’s first members were online with premiere fiber optic internet in less than a year, and the co-op shattered expansion goals over the next three years, boosted last year by a $3 million USDA ReConnect grant. Ntera also bid in the RDOF auction to keep the buildout going near Crescent, Cadott, and Sheldon.

PPCS estimated it would cost about $32 million to expand broadband to all 5,500 unserved members using 100 percent fiber access, which is capable of handling increased speeds as technology rapidly advances. In the RDOF auction, the FCC set the reserve for the 26 census blocks at $28 million over 10 years. PPCS bid just under 50 percent, at around $14 million, with the commitment to offer gigabit-level (best) speeds, at rates competitive with more populated areas. They lost. Ntera lost, too.

The FCC awarded the territories the co-ops were seeking to LTD Broadband, a relatively new, out-of-state provider, which was the top winner overall in Wisconsin and the nation, taking more than $1.3 billion in grants to serve 530,000 locations in 15 states. LTD’s plan includes “fixed-wireless,” an option that does not offer the speeds and longevity of fiber, and industry experts say would be problematic in the Wisconsin landscape.

“As with any wireless communication, the more ‘line of sight,’ the better. With our wooded hills and bluffs, the Chippewa Valley area offers anything but line of sight,” said Russ Falkenberg, director of IT & member services at Chippewa Valley Electric Cooperative, who was instrumental in the startup of Ntera. “Fixed wireless is not only impractical in this area, but it cannot compete with fiber, which is extremely low latency and future proof.”

Stakeholders across the country also cried foul, questioning LTD’s ability to secure the needed capital and deploy the workforce necessary to cover the mass territories it was awarded.

“I have very little confidence that RDOF will result in the massive improvements needed to connect rural America,” said Shannon Clark, Richland Electric Cooperative general manager and CEO, and board chairman of the National Rural Telecommunications Cooperative (NRTC).

After seeing the amount of federal support dollars that some of these companies accepted, which in some cases was less than 10 percent of what the FCC felt it would take to incentivize a build-out, you have to wonder why these companies bothered with the auction at all. I question why these companies weren’t willing to build years ago.”

Another big red flag in the auction results is the selection of Frontier and CenturyLink. Both are among the top 10 grant money winners, even though both were awarded territories under CAF and failed to fulfill the requirements to service their areas over a six-year time span.

We’re not giving up until we can pave the way for a connected future. Our members have waited long enough.”
Nate Boettcher,
president and CEO,
Pierce Pepin Cooperative Services (PPCS)

Also, SpaceX, a new satellite startup owned by Elon Musk, Tesla’s owner and the world’s richest person (net worth of $165 billion), was granted $886 million of federal subsidies to serve areas in 35 states, including some cities that already have high-speed internet options. SpaceX just recently launched, deploying thousands of low-earth orbiting satellites which, like fixed-wireless, is subpar to fiber.

SpaceX’s broadband-from-orbit “is a completely unproven technology,” said Jim Matheson, chief executive officer of the National Rural Electric Cooperative Association (NRECA), in speaking out against the FCC’s choices. “Why use that money for a science experiment?”

“Personally, I think SpaceX should have been ineligible, until they had a proven technology,” Clark agreed. “It doesn’t cost SpaceX any more to deploy an antenna to one person in remote Wisconsin than it does to provide it to one person in an urban setting—consumers per mile has no impact on their costs.”

PPCS, meanwhile, is not throwing in the towel. The co-op is seeking other options to move forward with broadband expansion plans, because even if LTD Broadband follows through with its proposed plan, it could still be years before members are connected. The RDOF auction winners are only required to provide service to 40 percent of their locations within three years, and 20 percent each year after. PPCS’ goal was to have all 5,500 unserved members up and running within two years.

“Without federal or other funding, the business case is less attractive, but not impossible,” Boettcher said. “We are exploring partnerships and we are pursuing grant opportunities, such as the Wisconsin Public Service Commission Broadband Expansion grants. We’re working with state and local elected officials and the Pierce County Economic Development Corporation. We’re not giving up until we can pave the way for a connected future. Our members have waited long enough.” —Julie Lund