You could say that Vernon County has cornered the market on a unique subset of ag tourism, which is a bit ironic considering the distinguishing characteristic of that very subset is a distinct lack of corners.

Built in 1906, the Harris-Kaplan barn is believed to be the oldest round barn in Vernon County. The restored barn is one of two round barns in the county that is on the National Register of Historic Places.

The years have taken their toll on the remaining historic structures in Vernon County, which has lessened the likelihood that it’s still in the running for the “most in country” honor, although the “most in state” standing is still secure. But no matter the rankings—Vernon County has a lot of round barns, and they add character and historical significance to the rural landscape. Visitors can take a self-guided auto tour to appreciate these symbols of the past following a map produced by local historians and available through the Vernon County Historical Society.

Vernon Electric Cooperative members Kevin and Patsy Alderson—he a former history teacher and she an artist—have teamed up for a number of local history projects. They’re researchers, tour guides, public speakers, and co-authors of two books, including “Barns Without Corners.” This book shares the story behind each of the nine historic round barns remaining intact in the county and is illustrated with Patsy’s paintings as well as photographs of each structure. The book also comes with a map and location points to help guide interested visitors to the barns’ often-remote locations, with notes of public viewing areas, as all of the barns are privately owned and stand on private property. Two of these barns are registered on the National Register of Historic Places. Some are still in use, although mostly for storage; only one is still used to house cows.

In the late 1800s and early 1900s, round barns were a fairly common sight in the Midwest. They were considered ideal for dairy farming; in fact, the Aldersons’ research shows that a round barn was considered to be a sign of a progressive farm.

The Donahue-Fish barn was built in 1910 and is still part of a dairy operation although it no longer houses cows, and the central silo is no longer in use. A rectangular barn was added to the other side of the round portion in 1975, into which the cows were moved. A metal roof and metal siding were also added to help maintain the barn. Inside, the barn more closely resembles its original state, with some of the original timbers still in place.

The Aldersons say the primary advantages of round barns over rectangular structures included lower cost of construction; ease of feeding, with a centrally located silo surrounded by inward-facing stanchions; sturdiness against severe weather, with the circular shape providing much less wind resistance than flat exterior walls would; and a self-supporting roof and expansive haymow.

Round barns reached their peak of popularity in Wisconsin between 1900 and 1920, which Kevin Alderson pointed out coincides with the state’s agricultural focus shifting from wheat farming to dairying. He said the proliferation of round barns in Vernon County especially can be traced to two factors. First, the county is close to the University of Wisconsin in Madison, where agriculture professor Franklin Hiram King was championing the round-barn design. Also, the area was home to noted barn builder Alga Shivers, who built or oversaw construction of at least 15 round barns in Vernon County.

Shivers’ own history is as unique as that of the barns he built. He was the son of a plantation slave who made his way from Tennessee to Vernon County, where he established himself as a progressive farmer. Shivers was a respected member of the area’s Cheyenne Valley Settlement, one of the earliest integrated communities in the country. He was a World War I veteran and a recognized community leader, but perhaps his most visible legacy is in the round barns he built.

That some of Shivers’ barns are still standing today is testament to his skills as an architect and carpenter. Alderson said a Shivers barn is distinguished by the wood siding made from logs that were typically cut right at the farm on which the barn was built. His style of construction also embraced placing the silo in the middle, a characteristic unique to Wisconsin’s round barns.

The round-barn design began to fall out of favor in the 1920s as farming progressed. Rural electrification, which helped facilitate great advancements in farm operations and increased the quality of farm life overall, ironically contributed to the end of round barns, although Alderson said it’s only one factor. 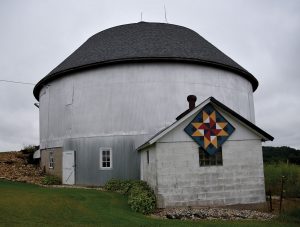 The Miller-Sebranek barn has been renovated with a new support system and new flooring. It’s used for feed and storage.

“They quit building round barns when they were no longer as convenient as linear barns for running the apparatuses like barn cleaners and milkers,” he said. “Square bales were a factor. Herd size was also a factor; farms were smaller back then. And round barns are harder to build onto.”

Gradually, the number of round barns in the county—thought to be as many as 25 at one time—dwindled, with some being taken down and others falling victim to time, the elements, and a lack of resources for their costly upkeep.

Coming Back Around   Although no longer as functional as they once were, Vernon County’s round barns have long been appreciated for their historic value. The Aldersons’ research and book are the latest in an ongoing effort to catalog and preserve the county’s rich history of round barns, a project that began in 1993 with a chance phone call from a Fulton County official.

A visitor to the Round Barn Museum in Indiana had commented to the curator there that Vernon County, Wisconsin, might actually have more round barns than Fulton County. That prompted a call to the president of the Vernon County Historical Society, the late June Zalewski Pedretti, for confirmation. June and her husband, Harry, searched the county’s backroads themselves, map in hand, to pinpoint locations for all the round barns they could find within county boundaries. They located 16 round barns and worked with the historical society to produce a pamphlet about them. Their efforts were documented in an April 1995 article in this publication. 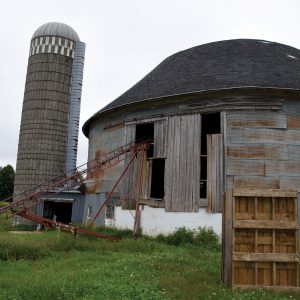 The Pepper-Schmidt barn is the only round barn in Vernon County that still houses cows.

Later, an owner of one of the round barns joined forces with Zalewski Pedretti and Dr. Wava Haney of UW-Richland Center to expand the phamphlet into a booklet entitled “Round Barns of Vernon County, Wisconsin—A Circle Tour.” The Aldersons used that very booklet to guide them on their own tour. While exploring and studying the round barns, Patsy took photos of the structures that she used to create paintings, prints of which became popular sellers.

As the supply of booklets ran out, the historical society reached out to the Aldersons to create a new book filled with additional information gathered from the couple’s research as well as Patsy’s paintings. You could say the Aldersons brought the whole project full circle.

For more information or to purchase a book, contact the Vernon County Historical Society, www.vernoncountyhistory.org or 608-637-7396, or contact the Aldersons at kpalderson@gmail.com.