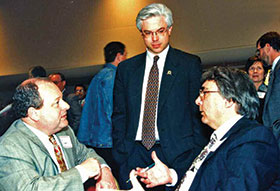 First World problems tend toward anxiety over retaining the comparatively easy existence we’ve enjoyed for most of the past 70 or so years. Frivolous as that may appear to someone who has never even seen a light switch much less owned dozens that virtually always work, the risk of squandering the advantages of First World residency is not imaginary.

One such advantage—a crucial one—is electricity to reliably power homes, farms, and businesses at costs low enough to keep commodities and consumer goods abundant and affordable. Human nature being what it is, a persistent First World problem is the notion of rearranging electricity markets to tilt the advantage toward one interest or another, almost certainly diminishing the advantage for the majority. This was a public policy mania of the 1990s, and there are those who’d like to bring it back.

Not many current members of the 132-seat Wisconsin Legislature were serving back in the days when policy experts held the consensus view that deregulation of the electric utility industry at the retail customer level was inevitable. Only 18 of today’s incumbents held office in 2000, the year Wisconsin quietly walked away from electric deregulation. Given pending retirements and the unknown results of next month’s elections, a maximum of 16 will return next January.

Those who’d like to revive interest in what had been a nationwide fascination two decades ago might see the departure of legislators who remember those times as an invitation to try again. Of the 50 states, 23 plus the District of Columbia adopted electric restructuring during the mid- and late 1990s. Seven states have since suspended their programs and others—notably Michigan and Ohio—are actively pondering substantive revision.

Merriam-Webster defines deregulation as “the act or process of removing restrictions and regulations.” Wisconsin residents haven’t experienced electric deregulation, but it’s not entirely absurd to contend that neither have residents of Illinois, Michigan, California, Ohio, or other states that allow retail customers to choose their electricity suppliers. How that can be is simple: The dictionary doesn’t venture into what happens when “restrictions and regulations” are removed only to be replaced by others.

State programs vary, but a recurring feature of 1990s electric “deregulation” is the simultaneous adoption of new rules and regulations plainly calculated to conjure the illusion of benefit to retail—particularly residential—customers. The classic example would be the Illinois Legislature’s imposition of a 10-year rate freeze by the same act that supposedly threw retail electricity prices into the unregulated, competitive market: Lawmakers thus defused the political bomb that would have gone off if retail deregulation raised, rather than lowered prices as promised. California lawmakers went so far as to authorize taxpayer-financed bonding to buy down electric rates and make consumers feel like they were winning.

Moreover, even absent legislative thumbs applied directly to the rate-setting scale, states prohibited ownership of electric generation and distribution by the same company, thereby discarding inherent efficiencies and turning some of the components of a fully functional system into a new class of middlemen.

Thus this magazine’s preference for the term “electric restructuring” rather than deregulation.

More than a decade and a half after a system reliability crisis in this state and a California market manipulation fiasco featuring rolling blackouts combined to drain the energy from Wisconsin’s march toward electric restructuring, major industries are asking to revive it. 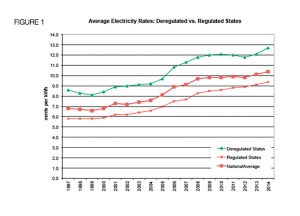 Redistributing benefits among customer classes, restructuring has coincided with higher overall costs, studies by the nation’s municipal utilities have found.

Hopes of resurrecting the idea—Wisconsin officials studied it energetically beginning in 1994—simmered on a back burner for years. This summer, advocates turned up the heat by warning the Public Service Commission (PSC) of dire economic consequences if high-volume electricity users aren’t permitted to shop for alternative retail providers—a message delivered widely in a lengthy, mid-August Wisconsin State Journal story industry observers perceived to be aimed at the new legislature to be seated in January.

The warnings were initially delivered to the PSC through public comments filed in response to the regulatory panel’s strategic energy assessment (SEA), a biennial project the latest edition of which was finalized at the end of July.

The SEA concluded that average Wisconsin electricity rates now top those of eight Midwestern states for the first time in a decade. At 10.97 cents per kilowatt-hour, they’re still slightly lower than the national average of 11.02 cents.

The Wisconsin Industrial Energy Group (WIEG) and the Wisconsin Paper Council jointly filed comments complaining on behalf of their member industries that Wisconsin electricity prices are excessive compared with those in neighboring states. WIEG represents about 30 of the most electricity-intensive industries in Wisconsin.

Figuring prominently in the August 21 newspaper story was Saukville-based Charter Steel, a manufacturer with deep Wisconsin roots and a retail customer of Wisconsin’s biggest combined gas and electric utility, Milwaukee-based WE Energies. A Charter official indicated bluntly that any future expansion of his company’s business would occur outside Wisconsin because of “the non-competitive cost of electricity in the WE Energies service territory.”

Charter’s comments to the PSC blamed rate increases mainly on the cost of WE Energies’ decision during the past decade to build two new coal-fired units totaling more than 1,200 megawatts at its Oak Creek plant—contributing to surplus capacity under today’s circumstances of tepid economic growth and slack demand but supported at the time by large industries and others concerned about the reliability of Wisconsin’s power supplies.

In the summer of 1997, then-Governor Tommy Thompson described the state’s predicament as “the lack of a dependable electricity supply” as he composed a letter appointing utility executives to a reliability task force assigned to recommend corrective legislation.

That same year, Charter Steel was among WE Energies’ (then Wisconsin Electric Power Company) harshest critics after being forced repeatedly to curtail operations. The state’s power grid had been hobbled by a nine-month repair outage at the Kewaunee nuclear plant, unexpected and lengthy shutdowns of both units at the Point Beach nuclear plant, and perhaps most critically, interstate transmission capacity inadequate to make up the shortfall.

The precarious power supply let the air out of the restructuring balloon as regulatory and legislative focus shifted to Wisconsin’s neglected infrastructure needs.

In the energy business during the 1990s, ritual invocation of the adjective “inevitable” in all references to electric restructuring was considered a sure sign of deep knowledge, and none professed more ardent enthusiasm for the concept than Wisconsin’s large, investor-owned utilities.

But times, and personnel, change. At the end of August William Skewes, executive director of the Wisconsin Utilities Association (WUA), told Wisconsin Energy Cooperative News those hoping to revisit the retail choice issue are using economic data tainted by its 2008 starting point.

“A longer look is needed than simply ‘cherry-picking’ data from 2008 to the present, when the economy began to suffer and has yet to fully recover,” Skewes said.

A February study by Madison-based energy consultants Christensen and Associates warned of another kind of cherry-picking: energy marketers in competitive retail environments seeking lucrative, high-volume sales by offering sweetheart rates to large commercial and industrial customers, “which may result in other customers bearing disproportionate shares of utilities’ generation costs.”

The Christensen study noted that adoption of retail choice by almost half the states during the late 1990s was driven primarily by industrial customers seeking lower rates, but “Nearly two decades later, there is little evidence that retail choice has yielded any significant benefits.”

Skewes of the WUA pulls no punches. As today’s public face of former restructuring advocates, he says retail choice “has been a disappointment in most states where it’s been tried. Far from living up to the hype, it has resulted in consistently higher rates and hits the poor disproportionately hard.”

Skewes sees that as a potential problem, citing “difficulties getting energy marketers who have no ties to the communities that regulated utilities serve, to bear responsibility for disruptions of power or reliability of service.”

He also cites the lengthy timelines inherent to the utility industry: It’s not unprecedented for the time lag from filing an application for regulatory approval to energizing a new transmission line to reach 10 years. Under a restructured system, Skewes says, “long-term planning becomes difficult, risky, and expensive. No one is held accountable for long-term growth so reliability erodes over time when demand outstrips supply.”

A 2015 study by the American Public Power Association (the nationwide organization of municipal utilities,) examined rate averages for 2014 and found customers in states that have adopted restructuring were paying more than those in states that retained the traditional regulatory model.

Looking at an “average of all averages,” customers in restructured states paid 3.3 cents more per kilowatt hour than customers in states that hadn’t taken the plunge into retail competition. Moreover, the study found the price gap consistently ranging from 2.9 to 3.2 cents over the preceding three years.

Sixteen years ago, this state’s electric infrastructure was so weak that a lightning strike or tornado taking down a single transmission line between the Twin Cities and central Wisconsin during the hours of peak demand could have triggered cascading outages across several states.

That specific vulnerability and others have since been remedied, but at the time, it was evident that a state where the routine delivery of energy was at constant risk would be ill-equipped to support genuine competition among multiple providers. Fixing those deficiencies was a project with a multi-billion dollar price tag; higher rates were an unavoidable cost of providing adequate infrastructure.

Robert Seitz, executive assistant to PSC Chair Ellen Nowak, pointed out that part of the rise in Wisconsin electric rates has been “the result of a build-out that occurred as a response to the need for reliability, and much of the build-out was being completed at just about the time the economy tanked.”

Public policy determined in venues other than the PSC also contributes to upward pressure on rates, with renewable energy mandates and the cost of complying with environmental regulations making the list.

But if the infrastructure is now robust, doesn’t that suggest flinging the door open to marketers willing to take a shot at competing in Wisconsin, potentially forcing others to lower their prices?

Not necessarily. Back in August, the Wisconsin State Journal quoted PSC spokeswoman Elise Nelson calling the merits of the retail choice issue “speculative at best” and pointing out that “a number of states have suspended or rescinded so-called ‘retail choice’” and turned back toward traditional regulatory practices.

“So it’s pretty hard to make a case that regulation is the problem,” he said.

Seitz points out that “virtually all” of the SEA public comments that advocated deregulation of Wisconsin retail markets came from outside the state, and from organizations with a direct commercial interest in retail power marketing.

All other things being equal, in states that have retained the traditional regulated utility model, the factor determining electricity prices will be the cost of providing the service. Or, as Seitz put it simply, “The actual cost is what’s going to dictate things in the long run.”

Even if Wisconsin lawmakers were persuaded to restructure this state’s retail electricity market, we wouldn’t be left to struggle with a Third World energy system; that’s not the point. The point is, people striving to overcome Third World disadvantages would likely know better than to do with their energy systems what was done in California and Illinois.—Dave Hoopman