In separate cases two weeks apart during July, federal judges in Chicago and New York ruled that there had been no violation of either the U.S. Constitution’s commerce clause or federal regulatory prerogatives. The state legislatures of Illinois and New York enacted proposals creating taxpayer and ratepayer subsidies valued at hundreds of millions of dollars, for the sole purpose of continuing the operation of otherwise economically nonviable nuclear power plants.

The legislative actions aside, the two court rulings could arguably be labeled as the beginning of the U.S. nuclear power industry’s first winning streak in a long time. Whether the streak continues will be up to at least a half-dozen other judges, higher up the judicial food chain in the federal appellate courts. If the appeals in two different federal circuits eventually yield markedly different answers to markedly similar questions, the possibility of the United States Supreme Court ultimately settling the matter would be greatly enhanced.

And at whatever level the issues are considered, a crucial question can be framed in two starkly different ways: Is it permissible for nuclear generation to lawfully be subsidized by government? Or, is the nuclear contingent the only element of the electric generation sector that lawfully can’t be?

The issues now working their way through the federal courts began taking shape a couple of years ago, as Chicago-based Exelon Corp., owner of the nation’s biggest fleet of nuclear power plants, turned to the Illinois Legislature for help covering the expenses of two plants operated by Exelon’s Commonwealth Edison (Com Ed) affiliate.

It was a classic case of supply-and-demand economics with a little government intervention mixed in: Giant shale gas discoveries upended what in the early 2000s had been a looming natural gas shortage and turned it into a glut, making gas the generation fuel of choice; wind generation subsidized by federal tax credits and made a “must purchase” item by state renewable energy mandates gained advantage in regional wholesale power markets; and not surprisingly, Com Ed found its Illinois nukes no longer able to compete on price.

It was also a classic case of Illinois politics: Pony up, or we’ll shut down lots of emission-free generation and lay off thousands of your constituents.

But if, as a cynic might have assumed, Com Ed was manufacturing a dilemma for political and economic purposes, its story was easy enough to check. The company said its Clinton and Quad Cities plants had lost a combined $800 million between 2009 and the end of last year, and their increasing difficulty having bids accepted in regional wholesale power markets was a matter of public record.

In June of last year and with the Illinois legislative session about to end, Exelon failed in its second try to get a subsidy bill approved. The company immediately announced the Clinton plant, licensed to run until 2026, would be retired June 1 this year. Quad Cities, licensed until 2032, would permanently shut down June 1, 2018.

But lawmakers returned for a veto session last December and on the third attempt, Com Ed brought the Sierra Club, Natural Resources Defense Council, and Environmental Defense Fund on board by amending the bill to increase ratepayer-funded spending for energy efficiency programs to $400 million annually.

The bill passed, and instead of the Clinton plant’s retirement, June 1 marked the first day of a ratepayer
subsidy Com Ed says will cost its average customer no more than 25 cents per month. Opponents said it would cost 18 times that amount. All told, the company will collect $235 million annually for the next decade, to indemnify it against the losses it expects to incur by offering the nuke plants’ generation at prices low enough to clear the wholesale markets.

If the threatened loss of carbon dioxide emission-free generation was a constant presence in Illinois’ lengthy deliberations, it was front and center in the much more abbreviated debate over state subsidies for economically challenged nuclear plants in upstate New York.

The dynamics are similar, as are the players, but actions last year by the State of New York added some urgency. Last year, Governor Andrew Cuomo committed his state to obtain 50 percent of its electricity from renewable generation by 2030, and to reduce its aggregate carbon dioxide emissions to 40 percent below 1990 levels on the same timetable.

Cuomo and others saw that the emission reduction target would be unachievable if three nuclear plants on the shore of Lake Ontario were retired ahead of schedule. Their owner—once again Exelon—had indicated that absent subsidies it would take that action because the plants were losing money.

As this situation unfolded last year Exelon was in the process of purchasing one of the three money-losing plants from New Orleans-based Entergy Corp., owner of the nation’s next-biggest nuclear fleet, in a transaction since completed. (Holding-company ownership of nuclear plants scattered across the country traces back to a buying spree around the turn of the 21st century, when large regional utilities with already substantial nuclear assets sought to expand them, expecting that government policies to battle global warming would make them hugely profitable in competition against coal-heavy utilities and non-utility generators primarily operating natural gas-fired plants. The latter produce only half the CO2 emissions of a comparably sized coal plant whereas nuclear generation produces none.)

Late last winter, Cuomo and state lawmakers enacted a proposal authorizing approximately $8 billion in subsidies to Exelon over the coming 12 years, again to protect the company against losses it anticipates to result from bidding the plants’ generation at prices acceptable in regional wholesale markets.

In March, an online publication by the then-Syracuse Media Group (now Advance Media New York) reported that Exelon executives on a conference call told investors the combined Illinois and New York subsidies would increase company margins (revenues minus fuel and purchased power costs) by $400 million this year and $600 million in 2019.

Like the Illinois legislation, the New York enactment was immediately challenged in court.

Critics of the nuclear subsidies naturally include groups claiming to speak for consumers and objecting to higher utility bills. In New York, Citizens Against Corporate Bailouts, described in a February Associated Press story as “a conservative free market group,” allied itself with “liberal environmental advocates” who evidently dislike nuclear generation even more than carbon dioxide emissions. The alliance came out against the subsidies and drew fire from a Cuomo spokesman who, in a veritable festival of mixed metaphors, referred to the group as “D.C. shills” who were “carrying Big Oil’s water.”

But higher-profile opposition and the thus-far unsuccessful legal challenges have come not from consumers, but from non-utility energy companies, organized for power sales into deregulated wholesale markets and power marketing in states that allow retail electric competition.

Plaintiffs in the Illinois and New York lawsuits include the trade organizations Electric Power Supply Association and Coalition for Competitive Electricity and—there is overlap—individual member companies like Calpine, Dynegy, and NRG Energy, to name a few.

Plaintiff claims include the argument that state subsidies unlawfully thwart the Federal Energy Regulatory Commission’s (FERC) ability to regulate wholesale electricity markets by enabling Exelon plants to sell power below their production cost, and that they violate the Constitution’s commerce clause by intervening in competitive markets operating across state lines. They’ve also argued that the resulting increase in the supply of electricity reduces the prices competing generators are able to obtain.

So far two judges have disagreed but there is a long way to go, and plaintiffs take solace in a 2016 U.S. Supreme Court decision. In Hughes v. Talen Energy Marketing, the high court ruled 8-0 against a Maryland program adopted in response to concerns that low wholesale prices were threatening the adequacy of generation capacity by providing no economic incentive to build new facilities.

The Maryland program called for a state contract with a developer to build a new natural gas-fired plant, bid its output into the wholesale market at a specified rate, and be made whole by utilities and others serving Maryland consumers if the mandated bid price wound up losing money for the developer. The Supreme Court said that infringed on the FERC’s authority.

In the New York case, Judge Valerie Caproni rejected the Maryland argument, saying the subsidy “does not adjust or ‘set’ the amount of money that a generator receives in exchange for the generator’s sale of energy or capacity into the [wholesale market]auction.” 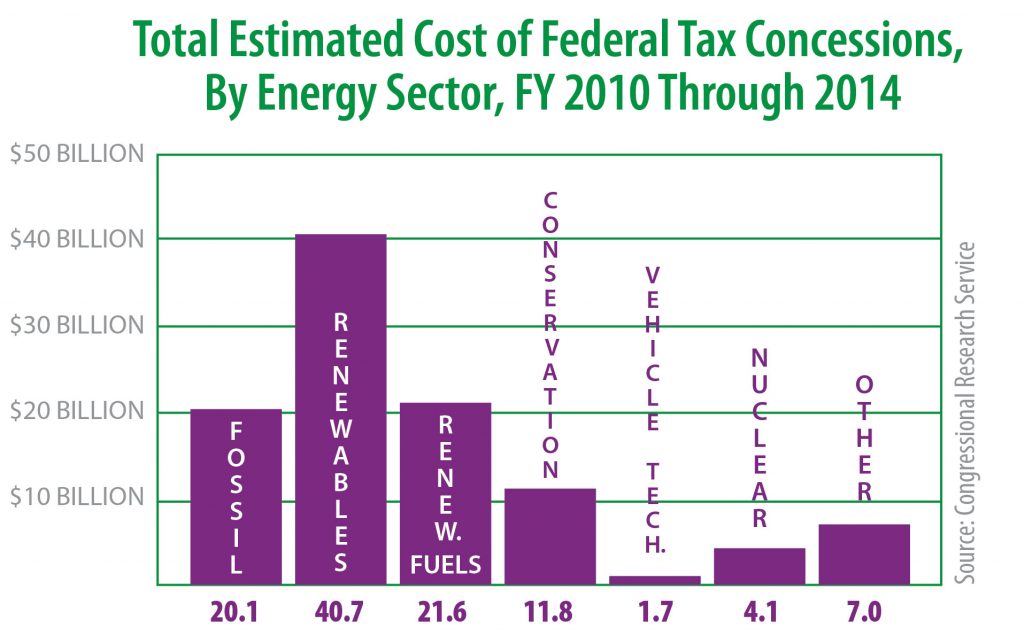 No form of energy production in the United States goes without a subsidy of some kind, though some subsidies are more direct than others.

Prior to the recent Illinois and New York actions, in March 2015 the nonpartisan Congressional Research Service (CRS) published a report titled Energy Tax Incentives: Measuring Value Across Different Types of Energy Resources. It was created to inform congressional committees and staff and evaluated “tax expenditures”—federalese for revenue collections foregone in pursuit of policy objectives—and, among many other things, direct subsidy spending on electricity production.

The data presented in such reports always lags by a few years but broad trends are clear. Looking at the “estimated revenue cost of energy tax provisions” for the 2010 through 2014 fiscal years, the CRS found tax expenditures totaling $20.1 billion benefiting fossil fuels, $4.1 billion benefiting the nuclear sector, and $40.7 billion for renewables, much of it in tax credits but the largest share through “grants in lieu of tax credits.”

None of this either justifies or discredits the Illinois or New York subsidy programs, but it does underscore the involvement of taxpayer subsidies in every type of U.S. energy production and clarifies the reality that some energy sources criticized for receiving government largesse actually receive comparatively little.

Over the next couple of years, the federal judiciary will determine the fate of Exelon’s nuclear preservation efforts, and might answer a question probably no one realized they were asking: whether, among all our methods of electricity production, nuclear fission is uniquely unworthy of taxpayer support.

One can hope the answer will emerge from sober reflection on what we’re really trying to do.