Two years into the pandemic and trucks and transformers are the toilet paper of today, according to many Wisconsin electric cooperatives. COVID-19 is currently waning, but the ripple effect crippling the supply chain is far from over. Like many industries, electric cooperatives are dealing with long delays and increased prices for much of their needed equipment.

“Transformers and regulators are the hardest to get,” said Nic Alberson, Chippewa Valley Electric Cooperative operations manager. “All of that is almost a year out. And those were always four-to-eight weeks’ lead time before.”

“Trucks are ridiculous right now,” Chippewa Valley President and CEO Dean Ortmann added. “We had to change our budget around because a bucket truck that we ordered in April of 2021, we won’t get until 2023, so we had to hurry up and switch it up. We ordered a 2-ton truck, and there was only one that we could find within 200 miles.”

Chippewa Valley also reports major delays in electric vehicle chargers. They ordered a level three charger almost a year ago, and it has yet to arrive. “We were supposed to get it in August. We built a site for it. It’s on Hwy. 29, high visibility, and it’s just sitting there, waiting for the charger,” Ortmann said.

“Anything with computer chips has been impacted,” Pierce Pepin Cooperative Services President and CEO Nate Boettcher said. “EV chargers, meters, etc. We’ve been fortunate to get most of our broadband materials, but electronics and computer hardware has been an issue.”

Dunn Energy Cooperative General Manager and CEO Jesse Singerhouse agreed. “Lead times have increased dramatically for transformers and meters, in particular. Sometimes we are not getting full shipments; for example, where we might order 100 meters, the company is shipping us 20.”

The days of ‘just-in-time’ inventory are gone—we simply can’t risk not having what we need when we need it.

While many people rushed to stockpile toilet paper, Wisconsin Energy Cooperative News (WECN) editor Dana Kelroy learned it’s a shortage of actual paper that would cause the real hardship. She ordered extra paper for this publication and ordered early, and still didn’t receive the needed supply to get the January issue of this publication in the mail on time. “Every time we thought it was on the way, we’d get news of another delay,” she said. “And even though we now have some backup supply on hand, we’re hearing the next few months will also be a challenge. Other similar publications are dealing with the exact same thing.”

In addition to the shipment delays for needed supplies, electric co-ops report prices are up, even higher than the overall 7.5 percent inflation rate in some cases. “Last July, when we were working on the work plan, one (protection device) unit we needed was $14,000, so we used that for budgeting for this year, and now we get a quote, and it’s $25,000. So that’s $11,000 we didn’t budget for,” Alberson said, adding that transformers and regulators are also up 30% or more. 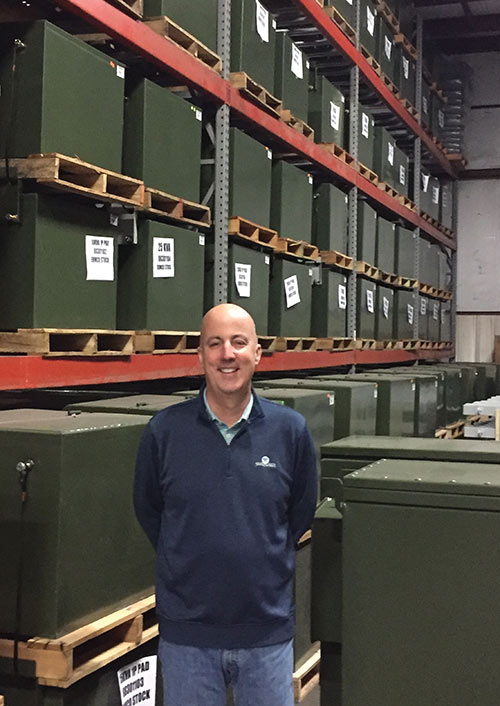 According to the Associated Builders & Contractors national chapter, as of August 2021, overall construction prices increased by 23.1 percent year-to-year and the price of steel mill products was up an unprecedented 108.6%.

To deal with the shortages, many co-ops have shifted their habits and are now ordering earlier and buying more of what they need to ensure members don’t feel the impact.

“We’re already looking at ordering our transformers and underground cable for 2023 this month,” said Kurt Harris. He is poised to take the helm at Jump River Electric Cooperative in May amid this turbulent time.

“We have increased our stock levels significantly over years past,” said Richland Electric Cooperative General Manager and CEO Shannon Clark. “The days of ‘just-in-time’ inventory are gone—we simply can’t risk not having what we need when we need it.

As a result, we have more money tied up in inventory, which puts a burden on our financials. If that gets worse it will impact rates. It’s a fine line between ‘having it’ and hoarding it.”

The greatest threat to reliable power is the potential for the “perfect storm”—a widespread severe weather event complicated by the supply chain backlog. It’s possible that a lack of materials, not manpower, could delay efforts to restore power during a major weather event this summer. 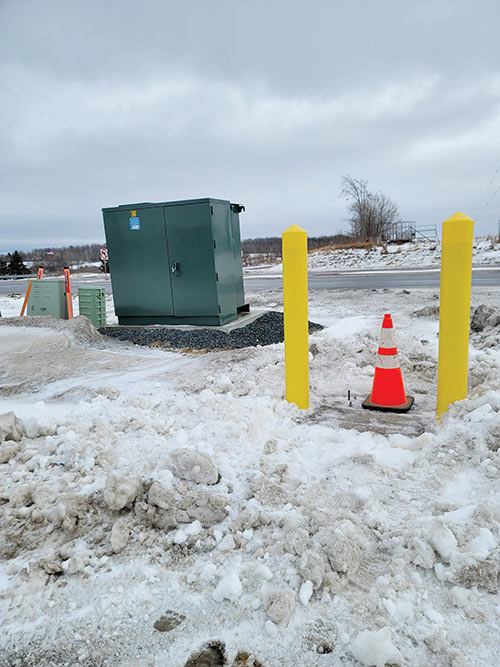 Chippewa Valley Electric Cooperative has a site ready for an electric vehicle charger on Highway 29, but due to supply chain issues, the level three charger, ordered almost a year ago, has yet to arrive. The orange cone shows where the charger will be installed. Photo courtesy of CVEC.

“A storm can deplete our stock of smaller items quickly, so we react by having more on hand rather than risk not getting supplies for months on end,” Clark said.

Parts of Louisiana experienced that challenge when they were hit with a series of major storms including hurricanes, and some people were without power for 30 days or more. And since some Wisconsin electric co-ops get poles from down south, the ripple effect quickly made its way here.

“Our 35-foot southern yellow pine poles come out of Louisiana, and since they got hit with storms our supplier is sending a lot of our red pine poles down there, so now 35-foot red pine is hard to get. Some guys are buying 45-foot poles and cutting them down,” Alberson said.

The cause of the supply chain crisis is multi-faceted and widespread, from domestic manufacturing plant COVID-19 shutdowns, to the labor force shortage, to rampant transportation issues—including shipping delays at multiple ports, railway bottlenecks, and a critical lack of trucks, all exasperated by the blockage at the Canadian border. The conflict between Russia and Ukraine threatens chip supply, as they are both major exporters of key raw materials needed to produce computer chips.

“We’ve been encouraging our co-op members to gradually increase the critical supplies that they carry,” said Matt Brandrup, RESCO president and CEO. “This includes backup transformers, conductors, and fiberglass and metal enclosures. Doing so over the next year or two will help them better prepare and respond to unexpected storms and continued supply chain disruptions.” 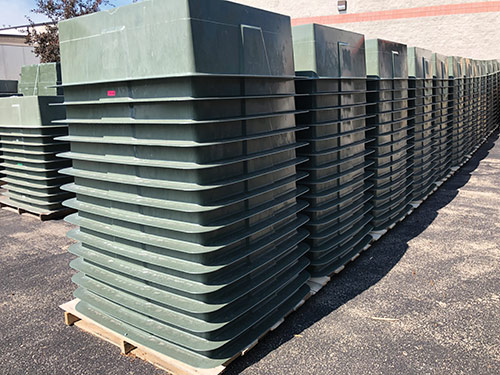 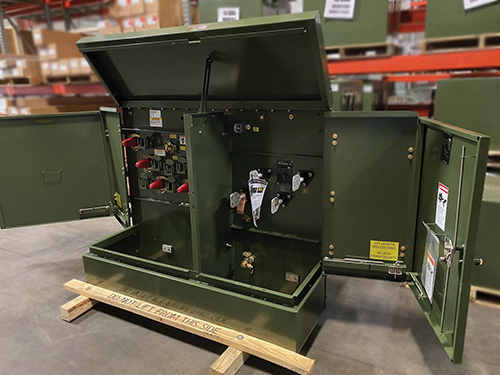 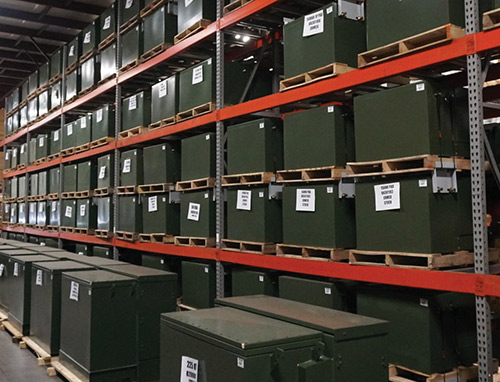 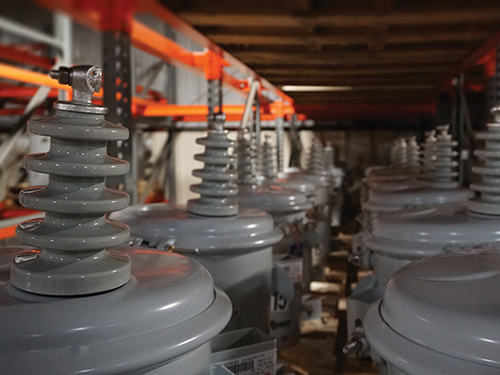 Modeled much like electric co-ops, RESCO is a member-owned, not-for-profit distributor of electric distribution and transmission system construction material—basically an extension of the co-op’s purchasing department.

“We’re able to work with our manufacturer partners to deliver extremely competitive prices, which enables our members to stay within their budgets,” Brandrup said. “These savings are ultimately passed on to the customer. We also return any ‘profits’ to our members in the form of patronage credits. We’ve also been fortunate when it comes to our product inventory, which currently stands at record levels.”

Now, perhaps more than ever, the cooperative model is an advantage for members. “Co-ops, we work together,” Alberson explained. “If someone has a surplus of transformers or equipment, they will share it, and we trade back and forth that way. We were recently able to get conduit that goes underneath the road and we had extra so we could share with a neighboring co-op or someone who needs it.”

RESCO anticipates that supply chain issues will ease in mid-to-late 2023. Until then, Wisconsin electric co-op leaders say they are committed to weathering this storm with minimal impact on members. At Jump River, Harris says they are working to avoid rate increases with good management. But a return to normal, sooner rather than later, would help too. “Hopefully, it ends soon, but I don’t see an end in sight.”—Julie Lund