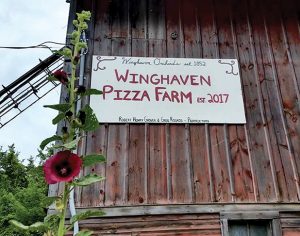 While visiting Winghaven Pizza Farm, guests are encouraged to explore the property and get a taste of farm life while they wait for their made-to-order, stone-fired pizza. Winghaven offers eight varieties of pizza and, new this season, an alternating pizza of the month.

Why just go out for pizza when you can go out for a unique pizza experience? At Winghaven Pizza Farm in rural Galesville, the original-recipe, locally sourced, stone-fired pizzas are reason enough to visit, but there’s so much more to see and do here that it seems a shame to just stay for dinner.

Of course, almost no one does—a trip to Winghaven Pizza Farm, located on Riverland Energy Cooperative’s lines, often turns into a full evening excursion. There’s a whole working crop farm set deep in a beautiful valley that guests are welcome to explore, and plenty of space for both lively lawn games and relaxing in lawn chairs. And on most Saturday evenings, there’s local music to enjoy as the stars come out.

“We went into this not interested in just opening up a restaurant—we were interested in opening an experience,” said co-owner Rob Grover. He and his business partner, Greg Roskos, opened Winghaven Pizza Farm last September and launched their first full summer season at the end of May.

Winghaven Pizza Farm is located on farmland that’s been in Grover’s family for five generations. Pizza is just the latest commodity to be produced here since Rob’s great-great-grandfather started the farm in 1862. At various times it’s been a chicken farm, an apple orchard, and a crop farm.

“Now it’s a pizza farm, so it’s gone through all sorts of formations over the last 165 years,” said Grover.

The farm’s latest incarnation came about as the current generation of Grovers was discussing ways to maintain the farm’s legacy. About the same time, Grover and his friend Roskos, who also grew up on a farm and has extensive experience operating businesses, visited another farm-to-table pizza operation and got to thinking the idea would work well at the Grover family farm.

The two named their business Winghaven in a nod to the farm’s history. Grover’s grandparents operated the farm as an apple orchard in the 1930s, and they named it for the many birds that appeared here due to the farm’s location along the migratory bird path provided by the nearby Mississippi River. 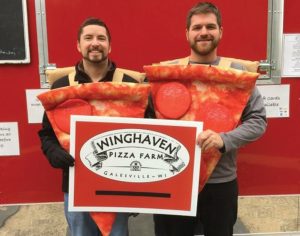 “They’d have so many birds nesting in the apple trees that they called it a haven for birds, so the orchard became Winghaven,” Grover explained. “We’re honoring their legacy and the past generations by calling the pizza business Winghaven.”

They’re also honoring Roskos’ family through the tasty pizzas they serve. Roskos’ late mother was a skilled and passionate cook with a special fondness for Italian cuisine. Roskos learned at her side and grew to share her passion for cooking.

One of his first and most memorable trips abroad, he said, was to Italy with his mother and grandfather when he was just a teen. While there, the three participated in a number of hands-on cooking classes, developing techniques in various aspects of Italian cooking.

As the partner mainly responsible for Winghaven’s food creations, Roskos has put what he learned from his mother to good use. The pizza recipes he developed for Winghaven reflect his mother’s cooking and incorporate many of her own combinations in the signature seasoning blends and sauces. 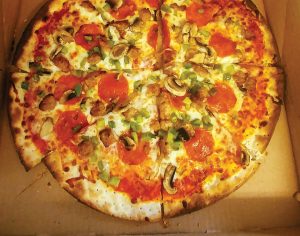 “It was something I kind of took to heart because it gave me the opportunity to honor my mom’s memory,” he said.

Winghaven pizzas are not only created from the heart, but they’re also made with fresh, quality ingredients. Sauces and seasoning blends are specially developed for Winghaven and prepared on site, and toppings are fresh and abundant.

“One of our big things is to not skimp out on ingredients,” Roskos said. “We’re not trying to give people the cheapest pizza around, but we want to give people really good-quality pizza that we’re proud to serve.” 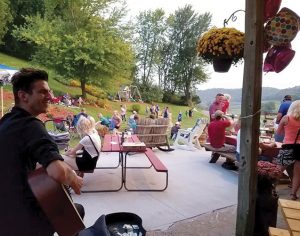 It’s also important to Grover and Roskos that Winghaven uses as many local sources as possible. Many appetizers come from Wisconsin vendors as well, with Ellsworth cheese curds and fresh meat sticks and jerky from Holmen included on the menu.

“We’re a small business ourselves, and we like to support other small businesses as much as we can, not in a competitive nature but in a collaborative nature,” Grover said.

Quality is also maintained by the owners’ preferred method of cooking. The pizzas are stone-fired, but unlike many farm pizza operations, Winghaven uses high-efficiency electric ovens housed in a commercial trailer where the food is prepared.

“We decided early on to go with electricity,” Grover explained. “One thing we really like about the electric ovens is that we’re not putting off a lot of smoke that you sometimes get with wood-fired ovens. We look at electricity as being very environmentally conscious, especially with what the electric co-op is doing now with renewable energy.”

Roskos said he and Grover also believe the electric ovens provide them with a better quality pizza.

“When developing recipes, we wanted to make sure we could have consistent products coming out each time,” he explained. “I knew with the electric ovens we could control the way we could efficiently and effectively get out a good number of pizzas while keeping them consistent, meeting the same high expectations every time.”

“Ease of operation is also important to us,” he added. “Because we chose to have this operation on the farm, we didn’t want to have to build a lot of outbuildings. We wanted to keep the focus on the farm.” 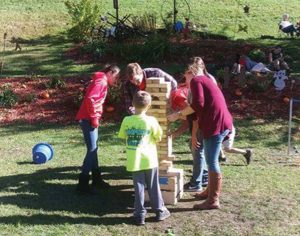 There’s certainly no missing the farm. When guests arrive at Winghaven Pizza Farm on a weekend evening, they’re greeted in the former barnyard area where the food trailer is set up near the 1906 red barn. Adjacent to the barn is a covered seating area with picnic tables, although guests are encouraged to bring their own lawn chairs or blankets as well.

Visitors order their food at the trailer, and then proceed to the bar built into the side of the barn to order beverages. Drink choices include many varieties of soda, freshly made lemonade, and a wide selection of local wines and craft beers.

Because each pizza is made to order, it may take a while before the food is ready, but that’s part of the fun. There’s plenty to do until the food arrives, although the bucolic setting may convince some guests that they’d rather spend the wait time doing nothing at all.

“One thing we’ve found with a lot of the families coming here is the parents will relax with a bottle of wine while the kids run around and burn off their energy before the pizza’s ready,” Grover said. 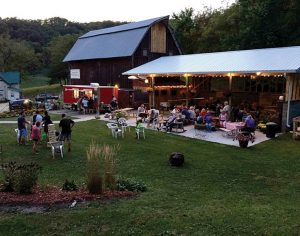 Music fills the air most Saturday evenings. Winghaven offered occasional live music during its brief introduction last autumn, and it was such a hit with the guests that Grover and Roskos had a stage built on the property, with plans for even more music this summer. Winghaven Main Stage not only provides guests with more entertainment, but it gives Grover and Roskos yet another opportunity to showcase local talent.

And of course, there’s the pizza. That’s still an experience in itself.—Mary Erickson