Since the very beginning of the rich history of electric cooperatives in America, the Wisconsin co-ops have justifiably taken pride in their contributions to the rural electrification movement’s success. This magazine would be an especially pertinent example, as the nation’s very first statewide publication for electric cooperative members. You’re reading the 941st monthly edition.

But the subject of this article is not something the Wisconsin co-ops invented or were even the first to embrace. It is something a great many individual Wisconsin co-op members support, finding that by opening their hearts even in a small way, they can have a big effect on behalf of people in need.

The credit for creating Operation Round Up goes to South Carolina’s Palmetto Electric Cooperative. Its history dates to 1989. Since then it’s been adopted by more than 300 electric cooperatives in 40 states. It’s a concept that’s elegant in its simplicity.

In for a Penny…

Operation Round Up—and numerous other co-op charitable programs traveling under different names but based on similar principles—is a 100-percent voluntary effort supported entirely by co-op members who choose to participate.

Members simply notify the cooperative of their wish to contribute and the co-op then begins automatically rounding the bottom-line amount of their monthly bills to the next higher even dollar amount. Beyond the amount actually owed, whatever spare change is left goes into the program fund. If your bill is for $101.02, you’re in for an extra 98 cents; if it’s $101.99, you’re in for a penny. Experience has shown that a typical member’s voluntary contribution averages about $6 over the course of a year.

But what a difference that modest $6 can make…

The seventh of seven principles that are expected to guide every cooperative in the conduct of its affairs is “Concern for Community.” In an article about Operation Round Up four years ago, South Carolina Living, that state’s electric co-op magazine, quoted an employee of one of its member cooperatives pointing out that beyond bringing electricity to rural areas, their mission involves a broader commitment to improving the lives of those they serve. In other words, concern for community.

A typical rounding program would be governed by a board of directors made up of co-op members who hold regularly scheduled meetings where they consider applications for assistance from the program’s trust funds. Such decisions can also be made at any time on a case-by-case basis. Receipt of benefits from the program is not necessarily conditional on co-op membership. 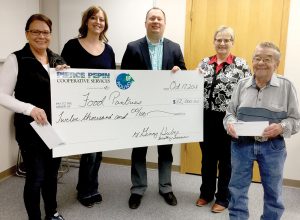 Pierce-Pepin Cooperative Services has donated an average of $1,500 to each of eight food pantries in the co-op’s service territory every year through Operation Round Up.

Local food pantries are frequent recipients of Operation Round Up assistance. Within the service area of Ellsworth, Wisconsin-based Pierce Pepin Cooperative Services, there are eight.

Each October, they’re included among the Operation Round Up grant requests. Though the amount contributed differs annually, the program has been able to donate an average of $1,500 to each of the eight, each year. 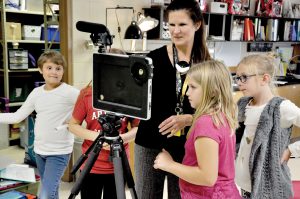 Adams-Columbia Electric Cooperative’s Operation Round-Up program helped a local school purchase a Podcaster that students will use to make videos.

Pierce Pepin points out a tie-in with another co-op philanthropy, the Federated Youth Foundation (FYF). The foundation was created to provide scholarships and other charitable contributions financed by proceeds from the investment of capital credits accumulated by co-op members and left unclaimed when they’ve died or moved away. (Legally, the alternative is to hand over the funds to the state treasury.) The Round Up board reviews education-    related requests, and often FYF is able to provide funds for classroom equipment or musical instruments, to cite just two examples.

A grimmer expression of charity, and a recurring one in annual reports of Operation Round Up activities across the state, is assistance to people who have suffered a residential house fire. In November, Charity Lubich, Pierce Pepin executive assistant and HR administrator, told us the quick assistance at a difficult time is greatly appreciated and it’s given without reference to a member contributing to the program.

“Some of these members are participating in the Operation Round Up program and some are not, but all have been the recipient of the generosity of the combined membership,” she said.

Whether they’re called Operation Round Up or Community Change or Community Cents, the cooperative-based charities are distinguished by their flexibility. Instead of giving people whatever it is that the programs provide, the co-op programs are in the business of finding out what people need. 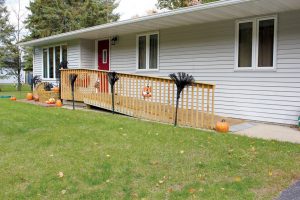 That frees them to pitch in with whatever looks like it will do the most good. In recent years that’s meant thermal cameras for a local fire department and a dishwasher for a community nutrition program, from Adams-Columbia Electric Cooperative.

It’s meant a freezer for a local food pantry and financial help for a young widow with children and a man blinded by an operation, from Chippewa Valley Electric.

It’s meant support for community reading programs and a “piercing nozzle” enabling a local fire department to introduce water into confined spaces from an adjacent room, from Dunn Energy Cooperative.

It’s meant financial assistance to remodel houses and install wheelchair ramps, to help people with disabilities extend the time they’re able to live in their own homes, from Oconto Electric.

And when a specific problem affecting the membership was identified, it’s meant Rock Energy Cooperative’s Project Lift Up, a bill-rounding program that raises funds to supplement Rock Cooperative Care, which helps members whose incomes are too high to qualify for federal energy assistance but too low to keep up with the bills. 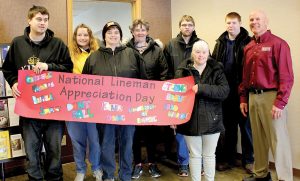 New View Industries, an organization that provides social and vocational services to people with disabilities, has been a beneficiary of Oconto Electric’s Community Change program. Clients of this program have given back to the co-op in turn by visiting the office to show their appreciation for linemen.

Other beneficiaries of Oconto Electric’s Community Change program are disabled people who receive social and vocational services from New View Industries. They learn daily living skills and some are enabled to enter the mainstream workforce—thanks in part to six IPADs purchased for their prevocational skills program by Community Change.

What Makes It Special

Not surprisingly, people closely involved with co-op bill-rounding programs have pretty consistent views of what makes them a special benefit to the communities. Jolene Neisius, who works in marketing and member services for Dunn Energy Cooperative, marvels that “Operation Round Up takes all of these small donations—on average 50 cents per member, per month—pools them all together, and creates these huge impacts. It is a great giving model.” 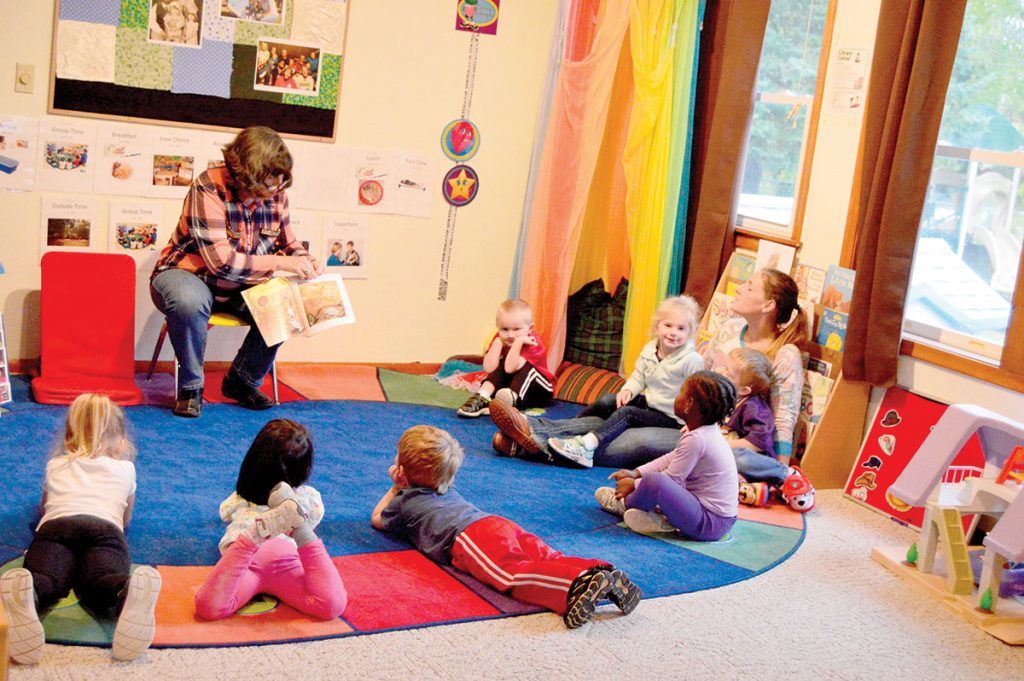 Project Bookworm, which provides books for area children enrolled in HeadStart and 4K programs, has received funds through Dunn Energy’s Operation Round Up program.

One activity supported by Dunn Energy’s program is Project Bookworm. Volunteers from the Dunn County Home and Community Education program take time one day each month to visit area HeadStart and 4K programs, read to the kids, and send a book home with them.

“In helping fund the program, it’s more than just providing money. It’s helping kids in our area get off to a good start,” Neisius says. “It’s doing right by those around us through our guiding Cooperative Principles, namely Principle 7: Concern for Community.”

“We believe the strength of our communities affects all aspects of life from health and well-being to our local economy and education,” Alesch adds. “The actions of the members are what make a community great and we reflect the compassion of our members through Riverland Community Cares.”

A longtime employee who’s been working for electric cooperatives since just before Palmetto Electric created the first bill-rounding program—and has thereby seen countless examples of members’ small contributions adding up to make other people’s lives a little better—has the experience to back up her statement that “These co-ops are doing some really big things in their communities through their Operation Round-Up and similar programs.”

Building Blocks  One of the things that programs like Operation Round Up bring immediately to mind is that they are a very clever method of making a positive difference in the lives of people facing hardship, without heavily burdening anyone.

A more subtle aspect of the programs is what might be called a “multiplier effect” on the activities of numerous small groups that do good for their communities but can accomplish a lot more in cooperation with other organizations. Charity Lubich tells us some Pierce Pepin grants have given local organizations the start-up funds they needed to create their own programs which, in turn, have gone on to serve their communities. At the same time, applications for grants have made the cooperative aware of other groups it can partner with and help grow their community service.

Poring over lists of Operation Round Up funding recipients and organizations whose projects the programs have advanced prompts the mind to return over and over again to a classic phrase: “the little platoons we belong to in society.” When Edmund Burke, the 18th century writer and member of Parliament, authored that phrase, his reference was primarily to the family, but also to the small civic and community organizations with which Burke saw families interacting as the building blocks of a civilized society.

Count the electric co-ops in the roll call of those little platoons.