A missing person mission in Marquette County in September 2019 was successful thanks to the help of the Green Lake County Sheriff’s Office and their drone team. After the relief of finding the missing person, Sheriff Joe Konrath and his staff at Marquette County Sheriff’s Office were inspired by their friends at the neighboring county to develop a drone team of their own.

After several meetings with Detective Sergeant Josh Ward from Green Lake County, Sheriff Konrath soon discovered they would need assistance to purchase the drone equipment needed. Their goal was to raise $30,000, as one camera for the drone costs nearly $13,200 alone. To date, they have received $21,500 thanks to generous donations from Adams-Columbia Electric Cooperative’s Operation Round-Up program, the Brakebush Family Foundation, and Marquette-Adams Telephone Cooperative. 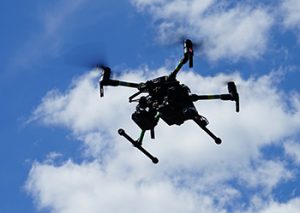 With the funding they were able to purchase a DJI Matrice 210 drone, a thermal camera, and a Zenmuse Z30 zoom camera, which can magnify the image nearly 30 times. The drone can fly for about 25 minutes and up to three miles away. Marquette County Crime Stoppers graciously allowed the Sheriff’s Office to use their trailer to house the drone equipment when responding to calls and for training purposes.
In order to fly the drone, the staff on the drone team had to obtain their Part-107 FAA pilot license. On June 25, Sheriff Konrath presented the team with a pilot wing pin for their hard work in obtaining their pilot license and for the skill set they bring to the communities they serve. 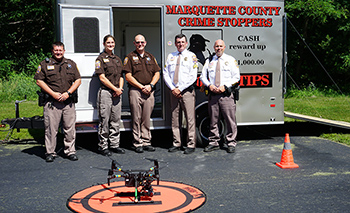 WHAT IS THE DRONE USED FOR?
Besides using the drone to search for missing persons, it can also be used for:

Operation Round-Up is a voluntary program through which members agree to have their electric bills rounded to the next highest dollar amount, with the difference placed in a special fund used for charitable giving and to support community needs.

This story is courtesy of Adams-Columbia Electric Cooperative.