You can fill in the blanks above with the expletive of your choice and you will get the idea of how we felt when ferry captain and cooperative board member Joel Gunnlaugsson stopped in to let us know that ice had drug the Plum Island #1 buoy and its 4,000 lb. sinker at least ¼ mile off station towards the new submarine cable and fiber optic cable laid alongside it. From all angles it was apparent that the buoy, no longer in ice, was in the vicinity of the new cable. Without knowing the length of the anchor chain connecting it to its sinker, we had no idea where the 4,000 lb. weight was. 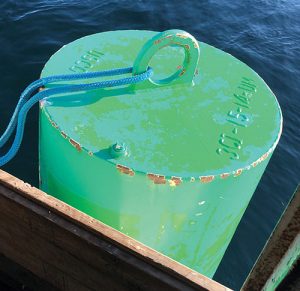 (Title image) View from Koyen Fisheries Sea Diver on approach to the wayward Plum Island #1 Buoy, tied to the Sea Diver (above).

Numerous calls to the U.S. Coast Guard (Cleveland, Sault Ste. Marie, Sturgeon Bay, Milwaukee, etc) were initially unanswered (or we were told to call another department) and Hoyt Purinton, Rich Ellefson, and I took the Arni J. Richter out to the location in order to get a GPS fix on the buoy itself. This fix was also confirmed by the crew on the Madonna. With the help of Roen Salvage engineer Pete Huber, the points were plotted on the cable map created during the installation operation. It showed that the buoy was approximately 100 feet beyond the mapped cable location.

After some discussion, Hoyt and I determined that the next course of action should be to use the ROV co-owned by the Ferry Line and Snapshot Science LLC/Steve Schmidt to determine exactly where the sinker was in relation to the power and fiber optic cables. Because we felt using the ferry to tie up to the buoy might actually drag it further and potentially make matters worse, Kenny Koyen was contacted and he volunteered to take us out with his fish tug, the Sea Diver, and tie up to the buoy while Hoyt investigated with the ROV. In the meantime, the Coast Guard finally got back to us and told us that the sinker was attached with 90 feet of chain. If our plotting and mapping were correct, because the buoy was in approximately 45 feet of water and the chain appeared to be straight up and down, this meant the sinker was likely 45 feet closer to the cable than the buoy, meaning that it had definitely crossed over it. At this point we had no idea if there was damage or if the ice was strong enough to move the cable if it were to be entangled in the sinker/chain of the buoy. The heavy steel armoring around the cable should protect it; however, a 4,000 lb. concrete sinker being drug across it is most definitely an unknown! 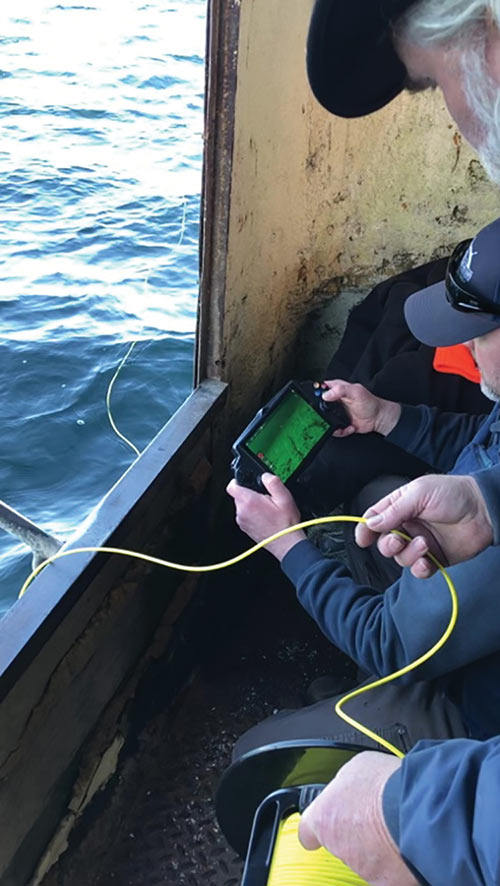 Kenny Koyen looks on as Hoyt Purinton operates the ROV

Investigation with the ROV confirmed that the sinker had been drug between 40 and 50 feet beyond the cable (which, on the good side, showed our mapping was extremely accurate). It also appeared that the sinker had been plowing up sand and silt on the bottom and pushing it in front of itself as the ice drug the buoy along. This actually created something of a ramp that allowed it to cross the submarine power cable with no apparent damage and at best, minimal movement of the armored cable. It did, however, catch the fiber cable that was laid alongside it, separate it from the aircraft cable we had lashed it to, and moved it probably a good 5 to 6 ft.

Using the ROV, Hoyt was able to inspect the length of the cable that had been disturbed and, other than the movement, it did not have any visible signs of kinking or even scuffing of the jacket. This armored fiber cable is the same cable that is run many miles for communication between oil platforms on the North Sea, and the manufacturer had told us when we specified it that it had become entangled in nets and anchors and had survived the experience. The aircraft cable lashed to it, primarily to get it to sink faster, would only be an adder to its strength. The cable will still need to be tested to ensure that there is no damage, but this will be done when the weather is better and in conjunction with other work. In the meantime, we will keep our fingers crossed that it tests fine. 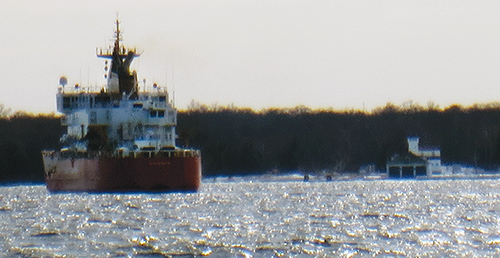 Upon retrieving the ROV, Hoyt, Kenny, and I all breathed a sigh of relief and we told Kenny that it might just be the most valuable lift he ever made! All in all, we were quite lucky. Hoyt, myself and the crew of the new USCG Cutter Mackinaw had a conference call on Sunday morning and when we described the situation to them, they were able to divert from their ice breaking trials and lift the buoy, chain, and sinker onto the deck of the cutter and take it away.

When I had further discussions with the USCG Cleveland office, which is in charge of Aids to Navigation (AToN), options to prevent this from happening in the future were discussed and it sounds as if the buoy will be physically replaced after all ice is gone, with heavier sinkers and then removed for the winter to be replaced with an electronic (virtual) AToN. 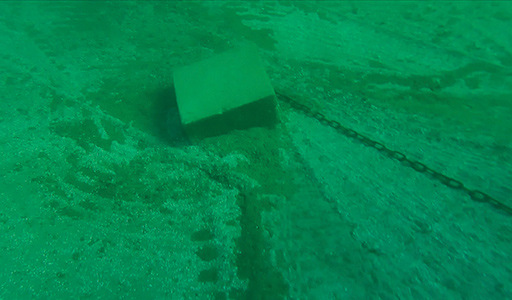 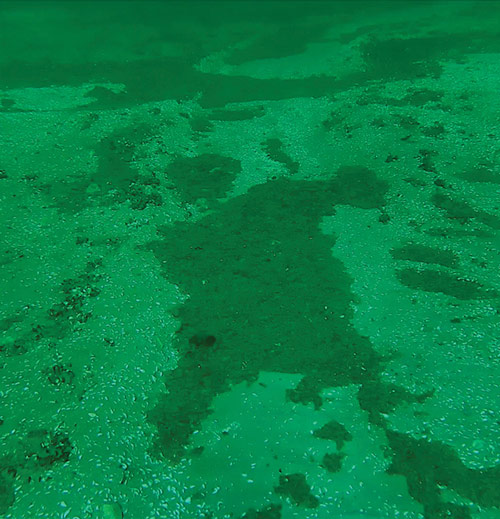 Trench created by ice dragging the sinker across the bottom. 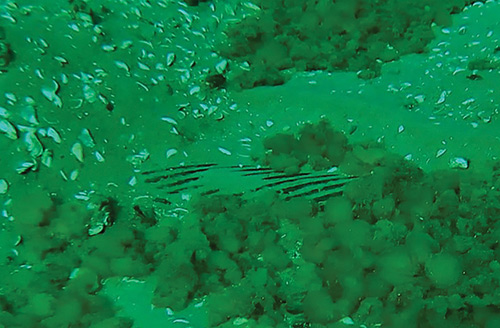 Submarine power cable peeking out of the mound of sand. 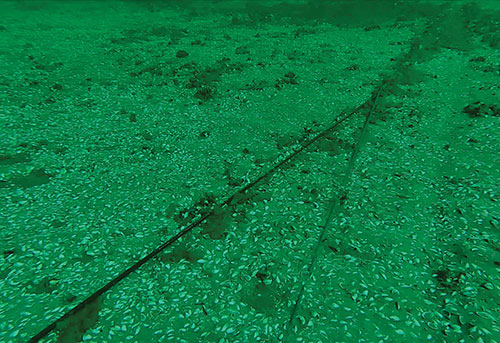 Fiber and aircraft cable (original location visible on the right of the photo). 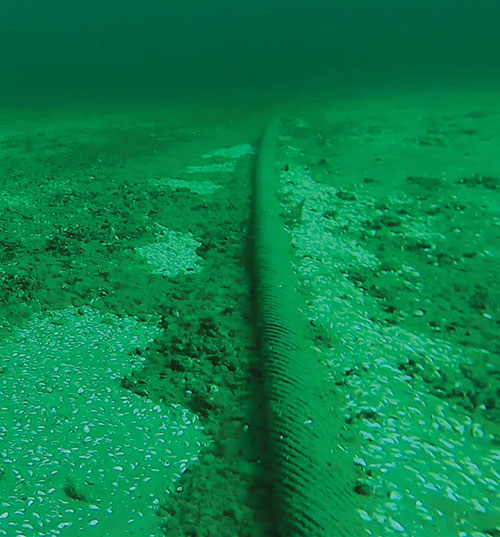 This is the first time this buoy has been more than minimally off station in the memory of longtime ferry crew, and Kenny Koyen said it is the first time he has seen it move in his 50 years of fishing. We considered this concern when planning the route of the new cable and purposely swung into the deeper trench of the Detroit Island Passage. This route kept the cable 340 feet away from the buoy at its closest. We did let the USCG AToN folks know that we would be in touch after the fiber was tested. As a side note, not many electric cooperatives (or any utility) have reason to call on the United States Coast Guard. While the AToN is their responsibility, their quick response with a vessel that was in the area for other purposes was admirable.

More importantly, when you see Hoyt Purinton and Kenny Koyen, thank them for their help!