Deep in the wooded hills of Richland County, you’ll discover a little magic in the form of five enchanting cabins nestled amongst the trees. These charming dwellings form Candlewood Cabins, and they turn a back-to-nature getaway into a fairy tale experience.

Created and operated by Richland Electric Cooperative (REC) members Norbert and Susan Calnin, the custom-built cabins offer sweeping views of the surrounding woods and meadows, with lots of windows and features including porches, decks, and outdoor firepits from which to take in the scenery. 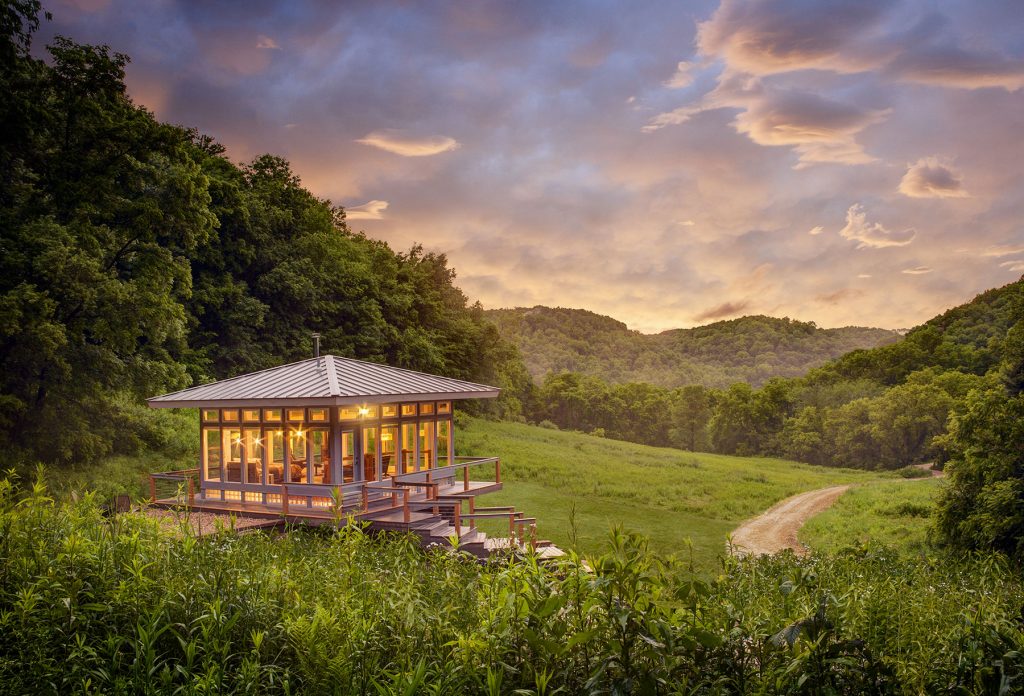 The glass walls of the Meadow House offer a panoramic view of the surrounding woods.

But that’s where the similarities end. Each cabin is unique; the structures range from a traditional log cabin to a distinctive glass cabin. That’s right—two of the five cabins are walled completely with glass panels, offering a spectacular, panoramic view.

The glass panels are outfitted with window coverings, but there’s no real need for them. The cabins are completely secluded, separated from one another by thick trees. The only eyes that might peer through the windows at night would be those of the birds, deer, raccoons, and other woodland creatures that inhabit the surrounding property. 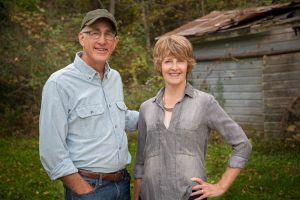 At each site, the Calnins’ theater backgrounds are evident in the cabins’ imaginative designs.

The Calnins came up with the concept for each cabin themselves, bringing in an architect to help with stabilization of the glass-walled houses. All furnishings were custom-made for each cabin. The result is a collection of one-of-a-kind cabins, each offering its own magical experience.

Inside the Meadow House, guests can partake in nature viewing and star gazing without ever having to leave the cabin.

From One to Five 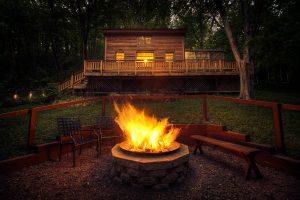 The Hillside Cabin is the original of the five Candlewood Cabins.

Although the five unique cabins blend together seamlessly to create Candlewood, the Calnins say they had no grand plan. They moved to the 80-acre former farm property between Muscoda and Richland Center in 1981 and opened Candlewood Cabins in 1995 with just Hillside Cabin, which was already on the property. Their intention was simply to provide a peaceful respite from a fast-paced world.

“We wish we could claim this great business plan that was all laid out,” Susan said, “but it was very organic. We just thought, ‘Hey, we’ve got a pretty good business with just one cabin. We should build another one.’ ”

So they did. They added a cozy log cabin, and both cabins became so popular that they thought of adding some space for extra guests to sleep. This third structure was another opportunity for the Calnins to put their creativity to the test. 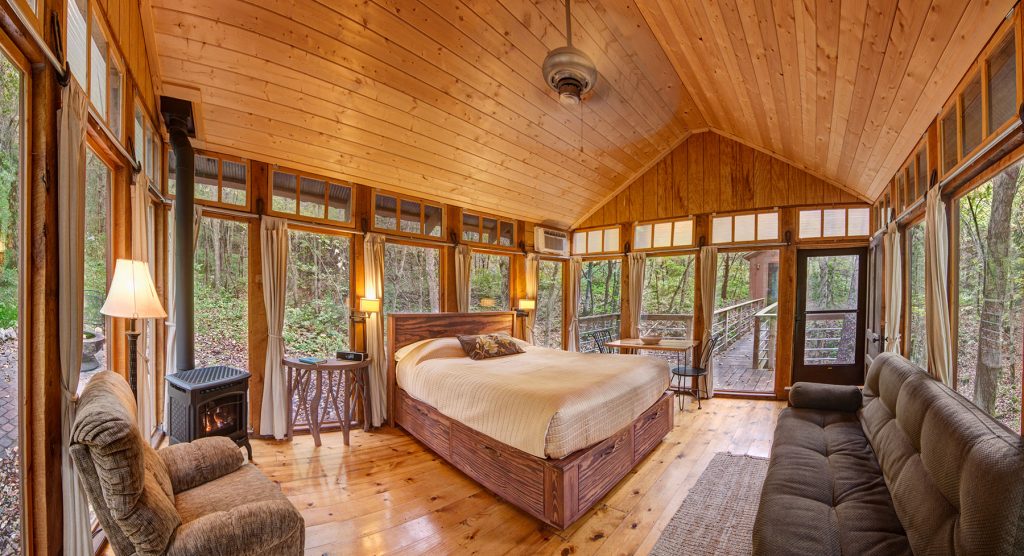 The Glass Cabin is a true back-to-nature experience.

“In another life Norbert was a contractor,” Susan explained. “He did a job where he took out 16 glass patio doors. We put them in the barn thinking someday we might build a greenhouse. Well, someday came, and we built a glass house as an overflow for the Hillside and Log Cabin for people with families. We thought they could just sleep in the glass house. But as we were building that, Norbert got the idea of walking across a bridge to a bathhouse. So it became the Glass House.” 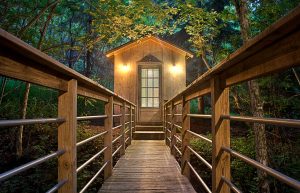 A foot bridge leads to the bath house and kitchenette of the Glass Cabin.

The Glass House was such a success that Norbert used the same concept to build the Meadow House, another cabin walled entirely with glass panels. They intended for this cabin, which Norbert describes as a more upscale version of the Glass House, to be their final one.

“With the success of the Meadow House, we had REC put the line in strategically,” Norbert said. “We told them to put it out as far as they could so the next owners would have the opportunity to build another cabin.”

They didn’t wait for the “next owners.” This past summer, Candlewood’s fifth cabin, Woodland House, opened. This two-story dwelling offers a treehouse-like experience, with a wrap-around deck on both floors and a tower encasing a winding staircase. Clearly customers were anticipating this new cabin with enthusiasm; Susan said bookings for the Woodland House were opened at 10:30 p.m. one evening (Candlewood Cabins does all its bookings online), and it was booked solid for the entire year by the following morning.

The Calnins say social media has helped spread word about Candlewood Cabins and contributed to the demand, but Norbert also noted that the business grew as people were recognizing the value of getting back to nature. 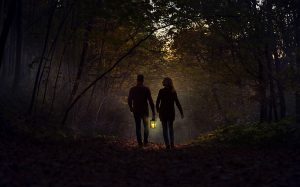 A walking trail begins at the foot of the Meadow House driveway and extends to the top of the ridge.

“We came along with the right thing at the right time,” Norbert said. “We just keep reading a lot about more people living in urban areas and cities than in the countryside. When people were coming, even to our first cabin, we kept hearing them say that it’s great to get out of the city. So as people were discovering us, we were discovering that there was a big need for what we were doing.”

However, a visit to Candlewood doesn’t have to be completely unplugged. When Richland Electric extended power to the cabins, the Calnins asked for the cable to buried so there’d be no power poles detracting from the magical woodland atmosphere. Therefore, despite their rustic location, the cabins all offer modern amenities. Each has a fully equipped kitchen area and air conditioning—four even have wireless internet service.

The Glass House is the only dwelling without wi-fi, and that’s by design. This house is meant to be a true back-to-nature experience. Four of the cabins have heat and are available year-round; two are kid and pet friendly.

Plan Ahead and Act Quickly

If you want to experience the magic that awaits at Candlewood Cabins, it’s best to be prepared with a plan and a quick finger. With the exception of some occasional open nights here and there, most cabins are fully booked through 2018. The Calnins will open all the cabins for 2019 reservations on January 5, 2018. They use a strictly online booking system, so if you don’t have a computer, you’ll need to get to a library or other internet source.

Each cabin comes with plenty of appealing outdoor amenities, including this deck in back of the Log Cabin.

Anyone who likes the Candlewood Cabins Facebook page will receive notifications when a cabin opens up for reservations. And that just might get you a fairy-tale ending. (Photos by Peter Godshall)