More than 60 electric cooperative teens attended the three-day Youth Leadership Congress (YLC) at UW-Stout July 12–14. This was the first in-person event since 2019, and the first time YLC has been held at UW-Stout.

YLC members participated in activities aimed at building leadership skills, including a session on “breakthrough leadership” by motivational speaker and author Craig Hillier, and an appearance by Will Tuchtenhagen, former YLC board member and recipient of the 2021 Glenn English National Cooperative Leadership Foundation’s $10,000 Scholarship.

Youth in attendance also can enter the WECA essay contest, which awards scholarship money to the top three winners. 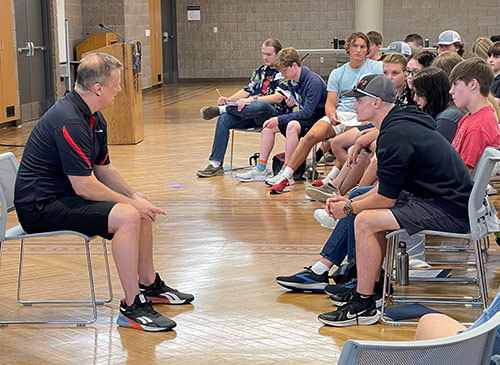 The following YLC attendees were recognized as 2022 MVPs:

More than 100 teens attended YLC annually before the pandemic, and event organizers are hopeful the event will return to full strength next year.

Attendees of Youth Leadership Congress (YLC) have the opportunity to run for Youth Board, which includes gathering signatures, conducting interviews, and delivering a speech before the group-wide vote at the conclusion of the event.

Youth Board members are invited to attend the 2023 NRECA Youth Tour in Washington, D.C., next summer and will return to YLC in 2023 as team leaders.

The Governor’s Task Force on Broadband Access has released its second annual report, which details progress made over the past year and sets goals going forward to ensure all Wisconsinites have access to high-speed internet. The task force, which is made up of industry and community leaders including Richland Electric Cooperative CEO & General Manager Shannon Clark and Dairyland Power Cooperative Government Relations Manager Jennifer Shilling, reports improved download speeds and better access overall.

The second annual task force report also focuses on “digital equity,” noting that many lower-income families cannot afford broadband, even if it is available in their area, and seeks to improve funding opportunities and resources.

The task force is also hoping to continue outreach to communities and regions to assist in the technical aspect of broadband expansion, from the early planning stages and including the often complex process of grant applications.

The funding opportunities fueling a cleaner energy future related to solar expansion for homeowners is also creating an opportunity for fraudulent activity. Wisconsin’s Department of Agriculture, Trade, and Consumer Protection (DATCP) reports it has already received as many complaints about solar companies in 2022 as it did in all of 2021.

The Public Service Commission of Wisconsin (PSC) announced the winners of the competitive application process for the latest round of grant funds from the state’s Broadband Expansion Grant Program, and Pierce Pepin Cooperative Services had all three of its projects approved. The PSC received 194 applications seeking a total of $495 million in funds and approved 71 projects totaling $125 million.