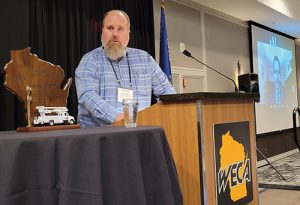 “Mike has always been a willing ear to electric co-ops, even before he was elected,” Washington Island General Manager Robert Cornell said. “He was the first Wisconsin representative to sponsor the Rural Act, which was an important act for all of us. He’s also been a strong supporter of the Secure Act, and he’s always answered the phone. It’s a rare trait in government that he has a genuine concern for his constituents and not just for the next election cycle.” 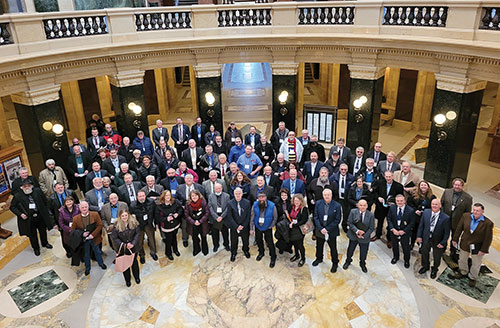 Following a one-year hiatus due to the pandemic, the Wisconsin Electric Cooperative Association’s (WECA) Education and Lobby Days event returned this year. Electric co-op leaders from across the state (pictured above) gathered in Madison February 4–5 to meet with state legislators about the issues facing the industry, and for a conference that included presentations addressing key topics, including ensuring reliability during the clean energy transition, the urban/rural divide and its impact on politics, an analysis of the current state of politics in Wisconsin, presentations from the candidates for the 3rd Congressional District, and more.

The Wisconsin Electric Cooperative Association (WECA) accepted a loss control contribution check for more than $94,000 from the Federated Rural Insurance Exchange, on behalf of members.

Federated Rural Electric Insurance Exchange reported record low insurance claims in 2021, despite a growing number of policies, according to President and CEO Phil Irwin. Irwin presented a check to WECA for $94,233 to be used for safety training, for a total all-time investment of $1,134,726.

Luke was born in Burlington and spent four decades working at Uhen’s Garage in New Munster, before retiring in Springstead where he was elected Sherman town chairman, and to the Iron County board. He was elected to the Price Electric Cooperative board in 2015, and he served in that position until the time of his death.

A veteran, Luke served with the Attack Squadron 215 in the Vietnam War, which is a squadron that flew A-1 Skyraiders deployed aboard the USS Hancock and USS Bon Homme Richard.

WECA has signed on to a national effort to help rural school districts expedite a transition to electric school buses. The Beneficial Electrification League has launched the coalition effort in advance of the release of $5 billion in federal funds designated for electric school buses, which was included in the Infrastructure and Jobs Act passed by Congress last year.

The effort brings together cooperative organizations representing more than 300 local utilities in more than 20 states and will guide coordination between utilities and school districts on electric school bus programs.