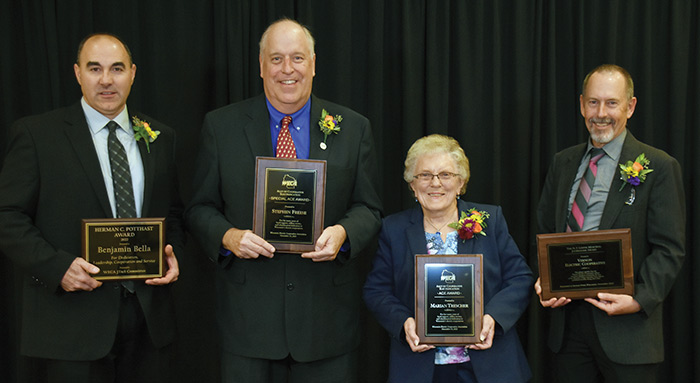 Marian Trescher has been an advocate for electric cooperatives for decades, assisting her husband Howard during his time on the Rock Energy Cooperative board, and taking over his seat when he passed away in 2004. A retired public school teacher, Trescher has a long list of public service and volunteerism in her community, and those who nominated her consistently describe her as professional, engaged, kind, dedicated, and extremely organized.

Steve Freese, President & CEO of WECA was selected to receive a special ACE Award. Freese was honored for his lifelong commitment to community, as evidenced by his many years of leadership and service to state and local government, community organizations, and the electric cooperative industry.

The ACE and Special ACE are the highest honors presented by WECA and its board of directors.

Ben Bella, Mondovi, who serves as the safety & loss control manager for Eau Claire Energy, Riverland Energy, Oakdale Electric, and Jackson Electric, is the recipient of the 2022 Potthast Award for his commitment and dedication to safety in the electric cooperative field. Bella has served in this role for more than 12 years. He was instrumental in the production of a series of educational videos and works diligently to educate children and the public about safe electricity use.

Vernon Electric Cooperative was chosen as the recipient of the 2022 N.F. Leifer Memorial Journalism Award, which is bestowed upon the co-op adjudged to have had the strongest overall local pages in the Wisconsin Energy Cooperative News magazine over the previous 12 months. Dave Maxwell, director of member services at Vernon Electric is the editor. This is the fifth Leifer Award Vernon Electric has won since this publication first began offering awards for excellence in 1966, and the third such honor to be earned on Maxwell’s watch. Pictured left to right are Bella, Freese, Trescher, and Maxwell.

By a vote of 2-1, the Public Service Commission of Wisconsin (PSC) voted in favor of a request submitted by Vote Solar, allowing third-party financing of solar installation in one specific case, a move that could open the door to allow private, unregulated solar companies to sell electricity. The action by the PSC supersedes state law by creating a new exemption to the definition of public utility, and upends Wisconsin’s historically well-regulated utility system, for the first time in more than 100 years.

“We are clearly disappointed in the PSC’s decision and believe it is an overreach on an issue that is outside of their jurisdiction. The decision to alter Wisconsin regulatory law after 115 years should only be done in the state capitol by the legislature,” said Rob Richard, WECA director of government relations. “We anticipate this decision will end up in the courts on appeal, and we will continue our fight for fair protections for all electric cooperatives and their members.”

WECA, Customers First! Coalition (CFC), and Wisconsin Utilities Association provided testimony opposing the request. The timeline for a judicial review is 30 days after the written ruling is issued.

The Midcontinent Independent System Operator (MISO) has released its 2022 Regional Resource Assessment (RSA) which finds the short-term risk of rolling blackouts in the region continues, and the long-term risk could get even worse.

According to the report, the overall amount of installed capacity increased in 2022, but much of the new generation is from intermittent resources – wind and solar – which are predicted to serve 60% of MISO’s annual load by 2041. While this will reduce emissions by 80%, it will also “sharply increase the complexity of reliably operating and planning the system.”

The report emphasizes the need for controllable ramp-up capability, such as Dairyland Power Cooperative’s proposed Nemadji Trail Energy Center, a combined-cycle natural gas plant in Superior, which is currently stalled at the federal level.