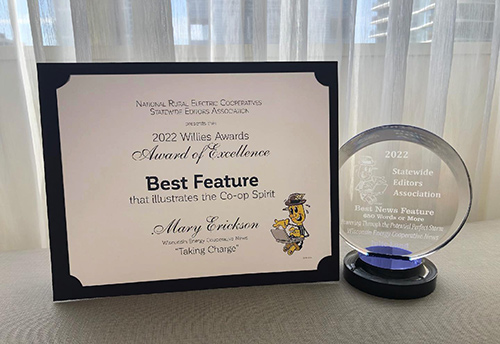 Taking first place in the category of News Feature, 650 words or more was “Powering Through the Potential Perfect Storm,” written by Director of Communication Julie Lund for the March 2022 issue. The judges described Lund’s story about how co-ops are planning for severe weather events despite the supply-chain woes as “an outstanding piece of journalism. Substantive, relevant, timely, insightful. Close enough to perfect to earn this year’s Willie.”

In addition, the September 2021 feature “Taking Charge: Partnership Helps Promote EV Awareness” won an Award of Excellence in the category of Best Feature Illustrating the Cooperative Spirit. Written by Associate Editor Mary Erickson, this story has a “great headline and good information throughout about an innovative partnership,” according to the judges.

Editor Dana Kelroy was on the planning committee and served as co-host of this year’s SEA Institute.

The Federal Communications Commission (FCC) reversed its December 2020 decision to award federal funds to SpaceX Starlink and LTD Broadband, which were two of the largest grant award winners in the Rural Digital Opportunity Fund (RDOF) reverse auction. The FCC said it was not confident that LTD could deliver on its broadband expansion promises, and said Starlink was a promising, but unproven technology. The $2.2 billion will remain in the Universal Service Fund and be eligible for other state and federal funding programs.

The bill also includes $9.7 billion for a grant and loan program that electric co-ops can access to buy or build new clean energy systems, extends subsidies for the Affordable Care Act, doubles the size of the IRS, extends the $7,500 electric vehicle credit, and implements a new 15% minimum corporate tax.

Former Jump River Electric Cooperative general manager Jim Anderson now heads up Midstate, making him the first GM to join the CHARGE network twice. All of Wisconsin’s electric co-ops are part of the network, which is now 94 affiliated strong. CHARGE EV was first formed in 2020 by 31 electric cooperatives in Illinois, Iowa, Minnesota, and Wisconsin.

Electric cooperative leaders from across the state gathered in Eau Claire last month for WECA’s 2022 Energy Issues Summit. The full-day event included presentations on beneficial electrification, the future of nuclear energy, the Clean School Bus funding program, the current potential for rolling blackouts in Wisconsin, the transition to renewables and the future of natural gas, and the state and national political landscape.

WECA Files to Participate in PSC Proceeding on Third-Party Financing

WECA has filed a request to intervene in the Public Service Commission of Wisconsin’s proceeding on the issue of third-party financing for solar installations. The PSC has voted to take up petitions following the request by Midwest Renewable Energy Association and Vote Solar, who argue that solar installers are not public utilities, and third-party financing of solar systems should be legally allowed. WECA supports a transition to clean energy, including solar expansion, as long as it supports efforts to provide safe, affordable, and reliable energy for all members.

The Midwest Independent System Operator (MISO) board, which directs energy transmission in 15 states including Wisconsin and part of Canada, approved a $10.3 billion transmission plan that could support 53 GW of new wind, solar, hybrid, and battery projects.

The plan includes 18 transmission projects including three in Wisconsin. They include the Tremval-Eau Claire-Jump River project, (West and Central WI), the Tremval-Rocky Run project, (Central WI) and the completion of the Wilmarth-North Rochester-Tremval project (MN and Western WI). All projects will still require approval from state regulatory agencies.