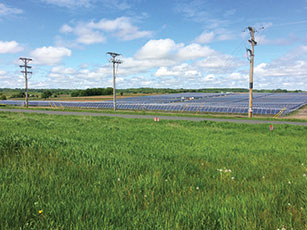 A new utility-scale solar generation facility was brought on line May 24 near Roberts in the St. Croix Electric Cooperative (SCEC) service area, coinciding with a milestone in the co-op’s history.

“After all the work that’s been put in to make this project happen, it’s exciting to have Sunflower II constructed and energized, especially on the 78th anniversary of our cooperative members first receiving power,” SCEC President and CEO Mark Pendergast said.

The 2.34-megawatt Sunflower II will utilize tracking technology to follow the sun’s path across the sky. It’s the latest project to be energized among the 15 solar facilities operating or being built in response to a 2015 request for proposals from Dairyland Power Cooperative. Under power purchase agreements, Dairyland will obtain 93 percent of Sunflower II’s power output and SCEC will obtain the remaining 7 percent.

It follows SCEC’s development of Sunflower I, a 103-kilowatt community solar array energized in July 2014 as Wisconsin’s first co-op member-owned solar garden to sell out its available subscriptions. Ownership of Sunflower II remains with the developer, SoCore Energy of Chicago, which will continue leasing the 20-acre site from SCEC.

La Crosse County Circuit Judge Todd Bjerke at the end of May vacated his order blocking construction on a seven-mile segment of the Badger Coulee Transmission line.

On May 1, Bjerke refused the Town of Holland’s petition to halt the entire 180-mile project but stopped work on the short segment running through the town, finding fault with the Public Service Commission’s reasoning in approving separate lines on both sides of an existing right-of-way along U.S. Highway 53.

Though lifting the construction ban, Bjerke ordered the commission to revisit its siting decision on the affected portion of the $580 million line, to run from the La Crosse area to Middleton and expected in service next year.

Lighting key to reduced energy use

Energy-efficient lighting is the driving force behind declining U.S. household energy use, according to a professor at the University of California–Berkeley.

Professor Lucas Davis said this spring his research and data from the Energy Information Administration and Census Bureau indicate that between 2010 and 2015, household energy consumption declined in 48 of the 50 states, and U.S. households now use less power than five years ago.

The decline is a sharp departure from the previous two decades. Household energy use grew 12 percent in the 1990s and 11 percent in the 2000s, Davis said.

He ascribes the turnaround to energy-efficient lighting, noting the installation of more than 450 million LEDs, more than 900 times as many as were in use in 2009, and more than 70 percent of households using at least some compact fluorescents.

Chicago-based Exelon Corp. has announced it will “prematurely retire” its Three Mile Island (TMI) nuclear plant near Harrisburg, Pennsylvania, by the end of September 2019. The announcement held out the possibility of continued operations if state or federal policy concessions improve the plant’s economics.

One policy option to improve nuclear economics, Exelon said, could include “a zero emissions credit program, similar to the approach being implemented in Illinois and New York.”

In May, Exelon failed for a second consecutive year to have its bid accepted for future guaranteed power deliveries from TMI into the Pennsylvania-New Jersey-Maryland wholesale market.

In 1979, TMI was the scene of a partial core meltdown, described by the Nuclear Regulatory Commission as “the most serious accident in U.S. commercial nuclear power plant operating history, although its small radioactive releases had no detectable health effects on plant workers or the public.”

Announced at Dairyland’s annual meeting, the 525–550 megawatt Nemadji Trail Energy Center, a combined cycle natural gas plant, will be built in partnership with Minnesota Power on a shovel-
ready industrial site in Superior.

“We’ve talked for a long time about the need to add natural gas as a renewable-enabling resource,” Nick said.

“Dairyland’s resource diversification strategy enables renewable forms of generation and ensures reliability, sustainability, and affordability. Natural gas plants provide critical back-up to intermittent renewable sources of power, like solar and wind. The Nemadji Trail Energy Center will respond on demand, providing the energy required by our membership and Minnesota Power’s customers exactly when they need it—at the flip of a switch.”