Giving up and going home during a storm isn’t an option for linemen, and it was never an option for Tangie Schendel or her beloved dog, Cinch, either. This commonality has now bonded an Oakdale Electric Cooperative crew to a dog and her owner forever.
Cinch, a 3 ½-year-old female border collie, always enjoyed exploring the sights and scents of the great outdoors. She never roamed far and always came back. In January, that all changed when her nose tracked a rabbit trail that lured her away from home for 10 straight days.
Tangie was grief-stricken but determined to bring Cinch home. She searched by foot, car, even horseback, visited and placed calls to local animal shelters, and shared posts on social media. Giving up was never a consideration.
Six days and nights passed without any sighting of this loving, mild-mannered dog, before a series of lucky breaks occurred.

Cinch was spotted alive.
With this newfound information, Tangie persevered with hope her dog would return home.
“I stopped at the shelter daily asking if they had any updates on my brown and white border collie,” shared Tangie.

A project received approval.
To improve reliability, Oakdale Electric Cooperative converted the overhead line that crossed Interstate 90 to underground service. The removal of the overhead line required coordination with multiple organizations to complete because traffic would need to be stopped in both directions.
Glenn Pampuch, operations manager, stated, “This type of project requires advanced planning, and ultimately the State Patrol dictates when the project will occur.”
He added, “It was decided the safest date for work was January 28. We were provided this notification two weeks prior to the start date.” 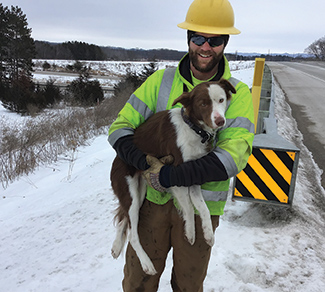 Cinch is carried to an Oakdale Electric Cooperative truck after linemen spotted her in the ditch on a job site on Hwy. 171.

In the right place at the right time.
Upon arrival at the project site, a shape underneath the pine tree brush caught the line crew’s eyes. A dog was discovered nestled in the snow, and they hurriedly carried it back to the bucket truck.
The friendly dog with the purple collar cozied itself right into the lineman’s lap.
“We were just lucky that we were there to pull the pole,” Construction Foreman Joe Engel acknowledged.
He continued, “We took the dog to Monroe County Animal Shelter. The volunteers knew it was Cinch immediately.”
When Tangie received confirmation that her best friend was found alive, she drove, in her own words, “a little too fast to get to her.”

Winter weather conditions remained mild.
A stretch of warm nights kept Cinch from freezing. Her placement in the ditch provided additional protection from the elements while keeping her hidden from predators.
“Cinch was very lucky the nights were so mild,” Engel stated, “but she is also a tough girl.”
It is said that dogs often take on the same personality traits as their owner. This could not be truer for these two. Cinch was hurt, but she fought to stay alive for Tangie.

Once safely inside the truck, she cozied up to her rescuers.

Health report was positive.
When volunteers initially took Cinch in their arms, a crunching noise had them think the worse. A veterinarian examination revealed that Cinch had a dislocated hip, torn ACL, and nerve damage, all the result of being hit by a car. Cinch, luckily, had no broken bones.
Tangie was advised that surgery, costing $3,000, would provide Cinch a great quality of life; otherwise, leg amputation was the next best option.
“I just love this dog,” Tangie simply stated.

Community support shown.
With a big decision ahead of her, unbeknownst to Tangie, another break was in the works.
“My aunt created a GoFundMe page [an online fundraiser]to raise money to pay for Cinch’s surgery,” Tangie stated.
Donations flooded in, and the full surgery costs were quickly raised. “I am just overwhelmed by the support and love. It’s awesome!” exclaimed Tangie.
Cinch underwent surgery a week following her rescue to remove the knob on her femur bone, which will allow her leg to go back into place. With a successful surgery under her purple collar, Cinch has a long road to recovery, but she is going to be okay.
“I am just so thankful the guys were there,” Tangie said.

Linemen don’t go home until the storm is over and service is restored.
After the storm Tangie and Cinch (now nicknamed Lucky) weathered, home is exactly where they want to be. Together, they never gave up. 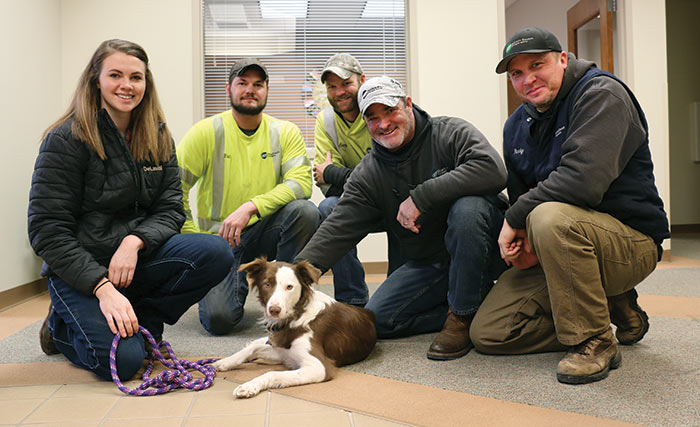